A Grade I Listed Building in Bexley, London 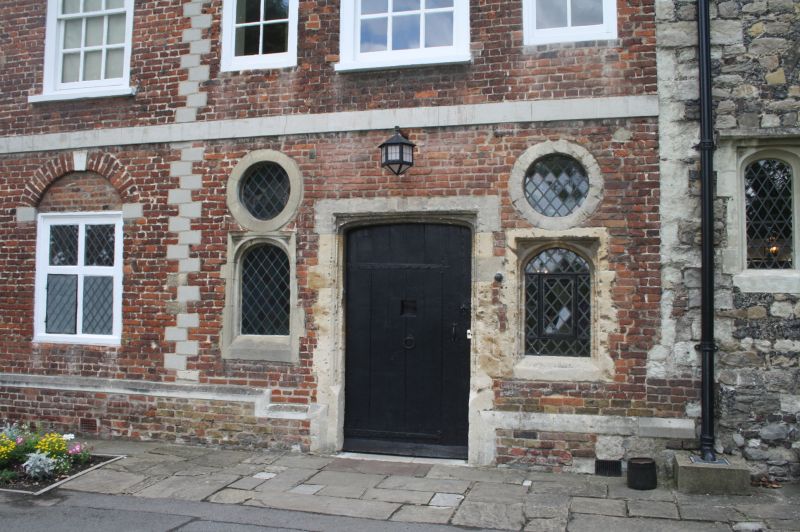 BOURNE ROAD
1.
5005
Bexley
Hall Place
TQ 5074 10/10 1.10.53
I
2.
Built by the Champneis family on the site of an older building. It is in 2
portions ; the north half of the house is C16 and forms a half H-plan. The
north front is faced with a chequer pattern of stone and flints. Cornice
and parapet. Slate roof. Two storeys. Central doorway with basket arch in
moulded stone architrave surround, with fanlight of 3 lights. On each side
of doorway is a tall canted bay with 8 lights, rising the whole height of the
building, with stone mullions to the windows. Between the west bay and the
west wing is a rectangular projection in the angle with a half-gable over.
The wings are gable-ended and each have one window facing north. The inner
face of the west wing has 3 windows and of the east wing 4 windows. All the
windows are casements with stone mullions and have hoodmoulds. The west front
of the C16 portion of the house is also of chequer-work with a projecting octagonal
turret of chequer-work at the south end. It also has a 2-storeyed canted bay
with 8 windows in 2 tiers and, to the north, another similar bay on the ground
floor only. The east front is of stone rubble and flints set in galleting.
It has 4 small rectangular projections rather like chimney breasts, some in
fact having 2 flues and terminating in twin diamond-plan stacks. Behind it
is the contemporary staircase, which has heavy posts terminating in balls
and heavy turned balusters and moulded rail. The half-H wings each have one
long room on the ground floor, with pine panelling. They are reached by a cross
passage with timber-framed walls with curved braces above rail level. A central
doorway leads into the great hall, which has a flat ribbed ceiling. In the
west wing are 2 rooms on the upper storey with elaborate plaster ceilings ;
the southernmost with a stone fireplace was the chapel. The south half of
the house was added late in the C17 and forms a hollow square. Red brick.
Stone string course, replaced in cement. Wooden modillion eaves cornice over
cement band. Tiled roof. Two storeys and attic. The south front has 10 sash
windows (with 2 blind) on ground floor in brick arcading with stone keystones
above. On the first floor are 10 sashes with glazing bars intact. Five pedimented
dormers to attic. Large central doorway in moulded wooden architrave surround
and large pediment over on console brackets. The east front has a similar front
of 11 windows and 2 hipped dormers, with sashes to upper floor and windows
with wooden mullions and transoms to ground floor, with some opening as casements.
At north end, stone doorway with moulded surround, with 4-centred arch flanked
by windows with similar surrounds and oculi over in plain stone surrounds.
The west front has 9 windows and 5 pedimented dormers; the windows are sashes
to ground and upper floor. At north end is a single oval window in stone surround
to each storey and there are blank ovals near the south end. The internal
courtyard is entered through a wrought-iron gate on the south side. The north
side of the courtyard, which is the south front of the central C16 wing, has
a red brick tower of 4 storeys with an eaves cornice and an octagonal lantern
over this. It has 2 windows and an oval window on each floor. The rooms round
the courtyard are service rooms on the ground floor and bedrooms above. There
is a mid Cl7 ceiling in the drawing room.
Reference: P E Morris, Hall Place, Bexley (1920). Scheduled as an Ancient
Monument.