A Grade I Listed Building in Orton-on-the-Hill, Leicestershire 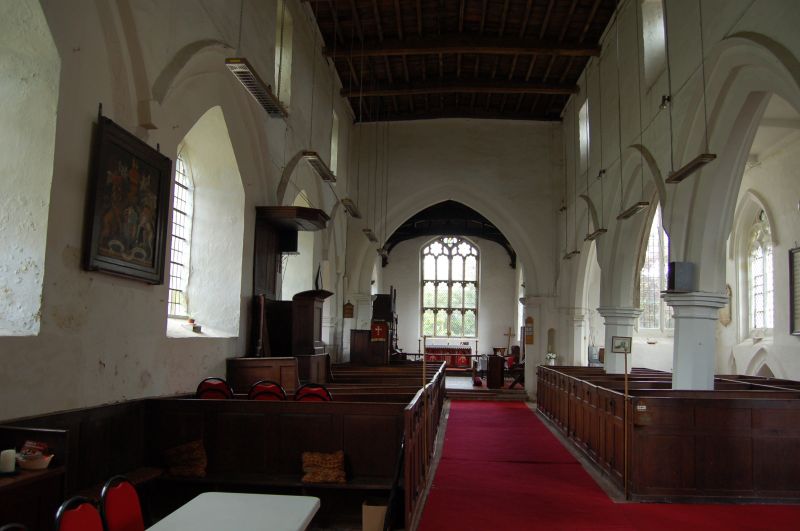 Parish church. Early C14 with later alterations and additions. Ashlar,
with lead covered roofs of low pitch. West tower, 4-bay nave with
south aisle and porch, 2-bay chancel. 3 stage west tower with diagonal
buttresses and crenellated with moulded coping stones to merlons and
embrasures. Recessed spire rebuilt in 1797 and partly taken down in
1950: Octagonal with 2 tiers of lucarnes. Square-headed west door and
lancet window above with trefoiled head; the second stage has a
square-headed loop to each side and the belfry openings have Y-tracery
with trefoil-headed lights. The south aisle has buttresses at the bay
divisions and angle buttresses to each end, a plain parapet with
moulded coping and string course and a C19 gabled porch with pointed
arch opening. Inside the porch is a C14 doorway with 2 orders of
colonettes and much weathered foliated capitals; the inner roll
moulding of the arch is keeled and the outer filleted, and there is an
ogee-shaped hood mould terminating in heads (c.f. north door of Church
of All Saints, Ratcliffe Culey, Witherley C.P.). The westernmost of
the windows is of 2 lights and has reticulated tracery beneath a square
head, and a wave-moulded surround. In the north wall is a similar but
taller window with truncated tracery. The other two south windows are
pointed, each having 2 cinquefoil-headed lights with Decorated tracery,
wave-moulded surrounds and returned hood moulds.
In the east wall of the aisle is a tall C16 window with 3
trefoil-headed lights beneath a segmental pointed arch with returned
hood. A clerestorey was raised in the C15; it has square-headed
windows of 2 trefoiled, ogee-headed lights on the north side, and
simple 2-light mullioned windows on the south side. The north aisle,
except for the east bay, was demolished in the mid-C18 and this side of
the nave refaced and windows inserted with segmental pointed heads and
Y-tracery. The east bay was rendered and given round-headed windows to
the east and west; a window in the north wall of 2 pointed lights was
blocked. To the west of this window, at roof level, is a figure carved
drainage spout. Chancel: C15/C16 east window with 3 tiers of 4
cinquefoil-headed lights and nominal Perpendicular tracery beneath a
depressed 4-centred arch and concave quarter-round moulded surround.
The side windows are mainly C14, the eastern ones each having 2
trefoiled ogee-headed lights and a single reticulation beneath a
2-centred arch. Both western windows have square heads; the northern
one is C14, the southern one C15/C16. Interior: 4-bay south arcade
with double chamfered pointed arches and continuous hood mould on
octagonal columns with moulded capitals. Similar north arcade, now
blocked, except the easternmost bay which contains the tomb of the
Perkins family, the former occupants of Orton Hall (demolished).
Pointed and double chamfered tower arch springing directly from the
side walls. Wide and lofty double chamfered chancel arch on engaged
semi-octagonal columns with moulded capitals. C15/C16 nave roof on
undecorated cambered tie beams; the steeply pitched C14 roof line is
visible high up on the west wall; immediately below it is a pair of
moulded corbels which supported some part of the former roof structure.
The aisle has a ceiling carried on chamfered tie beams. C19 low
pitched chancel roof with braced tie beams, the braces springing from
corbels. Fixtures and fittings: Full set of C18 box pews in the nave
incorporating a pulpit with a canopy; there is a second C18 pulpit at
the east end of the nave. In the south aisle is a baluster-font
inscribed 'S.S. PERKINS ESQ. 1764' and along the south wall is a stone
bench, formed partly of a coffin lid carved with a cross and chalice.
On the south side of the south arcade wall paintings have been revealed
by the removal of some of the limewash; scrolls and chevron patterns.
Towards the east end of the aisle is a tomb recess with segmental
pointed arch and roll and fillet-moulded surround, and next to it a
trefoiled ogee-headed piscina indicating that there was a chapel here,
probably a chantry. Between this chapel and the chancel there is a
squint, and in the chancel itself an ogee-headed piscina. Monuments:
Plain tombstone in the south aisle with a carving at the head end of a
man on a horse, and on the foot end of a cross. Next to it is an early
C16 incised slab depicting a man and a woman with children below. The
eastern bay of the north aisle contains the C14 recumbant effigy of a
Cistercian Abbot beneath a crocketed ogee canopy. Tablets around the
walls include one to Samuel Steele, died 1731, the inscription flanked
by curtains and surmounted at the corners by urns spouting flame and in
the centre by a trumpeting angel and a representation of the Holy
Spirit. B.O.E. p.342.