A Grade II* Listed Building in Much Wenlock, Shropshire 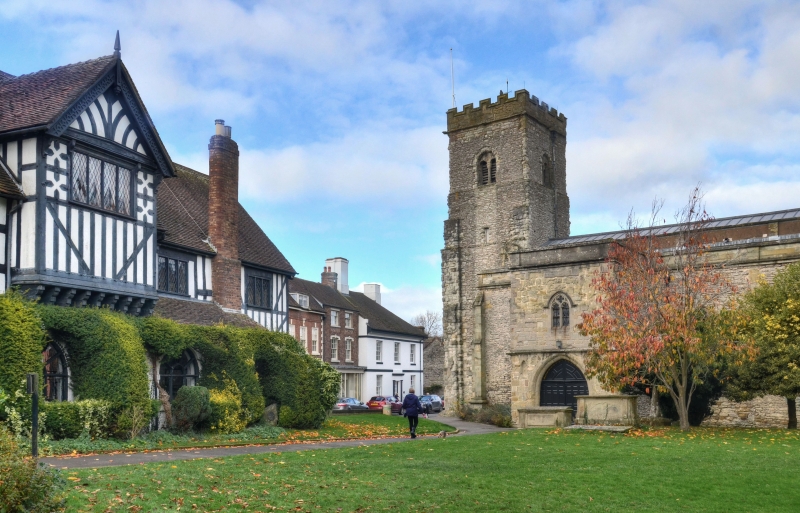 Church of England Parish: Much Wenlock with Bourton

GV II*
DATES OF MAIN PHASES, NAME OF ARCHITECT: A parish church of C12 origin, extended in 1844 when a new aisle was added and the church was refurnished.

EXTERIOR: The church is of neo-Norman character. The nave has 2 south windows of 1844 with 2-light plate tracery windows under hood moulds. The principal feature of interest is the round-head south doorway of late C12, with panelled door of the C19, inside the porch. The asymmetrical porch has an entrance under a cambered lintel, with an iron gate. Set back on its left side is a later lean-to boiler house under outshut roof. The west wall has a single small window under a shouldered lintel, in red-sandstone surround. The chancel has blocked square-headed windows of the C16 or C17 in the south and east walls, replaced by a simple pointed window in the east wall. The north aisle of 1844 has hammer-dressed sandstone quoins and oversailing eaves. In the west wall is a round-headed doorway, giving access to the gallery stairs. Above it is a small round-headed window. The north wall has 4 recessed bays with 2-light plate-tracery windows similar to the nave, and in the east wall is a cross-shaped window. The weatherboarded belfry has square louvered bell openings to each face, round clock face to the west (dated to 1940 on plaque inside the church) under a pyramidal roof with apex weathervane. The north vestry has paired pointed lights in the north gable end.

INTERIOR: The interior has plaster walls and ceilings. The 3-bay north arcade has round piers with moulded capitals and double-chamfered round arches. The chancel arch is also round but slightly more elaborate, with nook shafts, foliage capitals, and hood mould. In the nave is an C18 canted plaster ceiling on moulded wooden cornices and with ceiling rose, and the chancel has a plaster barrel ceiling on moulded cornices, also of ceiling rose, of similar date. These ceilings may have medieval roofs behind. The north aisle has a tall hammer-beam roof, which is plastered above collar beams. Nave and aisle have floors of red and black tiles and cast-iron grilles over heating pipes. The chancel has a floor of re-used grave slabs and modern tiles, and a modern panelled wainscot.

PRINCIPAL FIXTURES: The principal feature of the interior is its seating arrangement of 1844. The nave west gallery, a private pew for the Lawley family, is carried on broad square posts and has a panelled front. It is reached by stair in the north aisle, which has turned balusters and moulded hand rail. Box pews in the nave and aisle have plain ends except for roundels decorated with various motifs including quatrefoils and 6-pointed star, and carved poppy heads. The tub font is said to be C12 but is not lead-lined and is broken on one side. It stands on a round base and square plinth. The C17 polygonal pulpit stands on a pedestal, and has richly ornamented panels, some renewed. The reading desk also has enriched panels, but is much renewed. The communion rail is C20. There are few memorials. Dominating the east wall of the aisle is a hatchment to Sir Robert Lawley of 1834. In the nave south wall are a wooden 1914-18 war memorial plaque and a brass plaque to Harry Lister, missing on the first day of the Battle of the Somme in 1916. A wooden board with table of fees, dated 1789, is beneath the gallery.

HISTORY: A church built in the C12, of which the south doorway is the only surviving feature of that period. It was altered in the early C18, which is the date of the present plaster ceilings. In 1844 a north aisle was built and the chancel arch was rebuilt. A gallery and box pews were also installed at this time.

REASONS FOR DESIGNATION:
The church of the Holy Trinity, Bourton, is listed Grade II* for the following principal reasons:
* It has architectural detail of special interest including survival of early fabric, especially the C12 doorway, and C18 ceilings.
* Interior fixtures include C12 font, C17 pulpit and reading desk and a well-preserved seating plan of the mid C19.
* It has group value with Bourton Manor of 1874 by Norman Shaw.