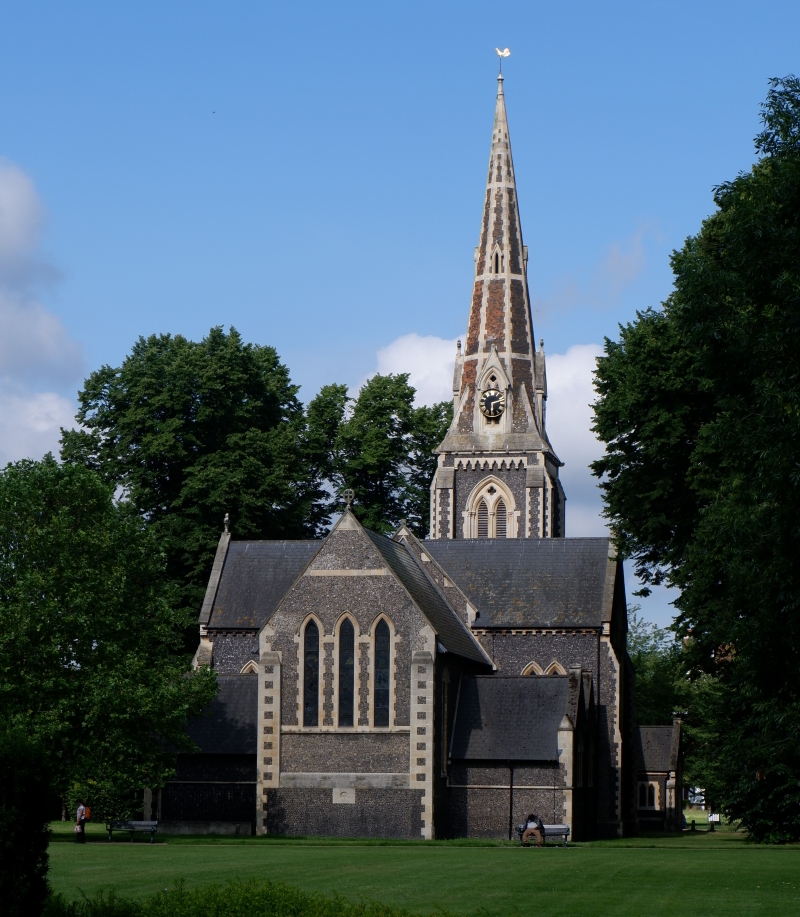 INTERIOR: All surfaces painted, mostly off-white. The five-bay, unclerestoried nave has octagonal piers and double-chamfered arches. The high-pitched nave roof has single hammerbeam trusses alternating with arch-braced ones. In 2000 the two west bays were converted by architect Ian Goldsmith into two-storey community rooms; on the ground floors there are sliding glass screens bearing texts and which separate the community area from the worship space; the first floor has a three-sided glazed projection.

PRINCIPAL FIXTURES: All of Scott's original work has gone, apart from the plain font. Reredos 1894 by E.W. Alleyn with paintings on copper in two tiers representing Types and Antitypes with the appropriate texts cited. The woodwork (stalls, screen, panelling in the chancel and pulpit is of 1906 by a group of local ladies trained by Arthur T. Heady at the local polytechnic. The `Flowers, foliage, musical instruments, etc., are carved with meticulous realism' (Cherry and Pevsner).

HISTORY: Christ Church was built for the new, early Victorian suburb of Turnham Green at a cost of £6,900 of which the Church Building Commissioners provided £500. It is a good and representative early work by Scott who would become the most successful and prolific church architect of Victorian England. Eight of his churches were reviewed in the first volume of the highly influential and hard-to-please journal, The Ecclesiologist, and Christ Church met with much praise, especially for its tower and spire which were considered `peculiarly excellent, and worthy of any ancient architect.' The building is contemporary with Scott's famous church of St Giles, Camberwell, London, and shares with it the architect's growing interest in and use of architecture that is faithful to the spirit of medieval work. The Camberwell church is held to be an important building in the development of C19 church architecture but at Turnham Green similar principles are at work, although on a smaller compass.

REASONS FOR DESIGNATION: The church of Christ Church, Turnham Green, is designated at Grade II for the following principal reasons:
* Set back on the south of Chiswick High Road, the church is sited in a large green area, and the building and its setting create an important focal point in this part of Chiswick.
* It is a typical building from the early career of one of England's leading Gothic revivalists. Later external alterations have been in keeping with the character of the original.
* Interesting late Victorian fittings, some executed by Polytechnic-trained craftswomen.