A Grade I Listed Building in Snape, North Yorkshire 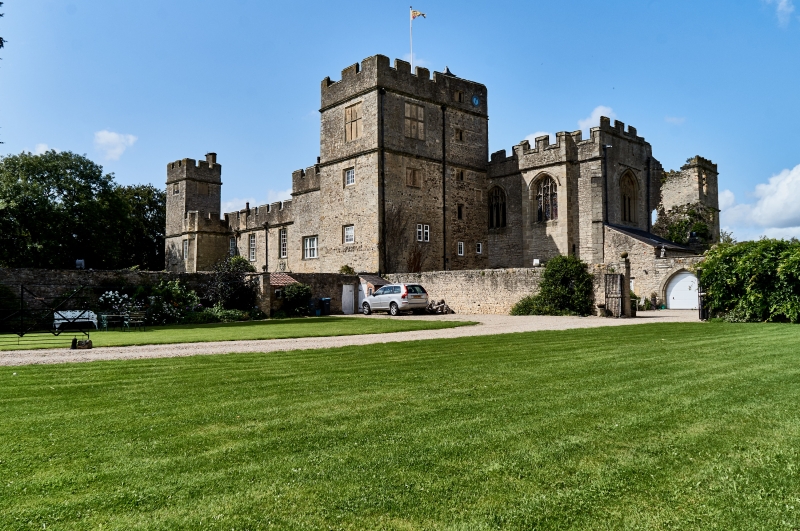 SNAPE WITH THORPE SNAPE
SE 28 SE
7/96
Snape Castle
5.5.52
GV I
Castle now 2 houses. Dating from c1430, mostly reconstructed in the C16 by
Sir Thomas Cecil; C18 alterations. Rubblestone and ashlar with lead roofs.
Rectangular in plan with a tower at each corner. All but the south side is
ruinous. Chapel to south-east. North front: towers almost full height but
without floors, the eastern tower has lost almost all parapet and south-west
corner of wall. South front: 9 bays, end bays towers, that to left 3
storeys, that to right of 4 storeys and bays 2, 3, 4 and 5 are 2 storeys,
bays 6, 7 and 8 are 3 storeys. Bay 5: early C18 round-headed panelled door
flanked by pilasters in flat-headed architrave with cornice. Swept
shouldered panel above has crest in round architrave and above this an 18-
pane sash in architrave with double keystone. Bay 2 breaks forward as an
oriel window on 1st floor and has a sash with glazing bars in chamfered
surround. Bays 3 and 4 16-pane sashes in chamfered surrounds to ground
floor. 24-pane sashes in architraves with cills and double keystones above.
Bays 6 and 7 tripartite sashes with chamfered surrounds to ground and 1st
floors. 3-light mullion and transom window to 2nd floor of bay 6. Inserted
door between bays 6 and 7. Bay 8 breaks forward slightly with C20 half-
glazed door and 4-pane sash above. The right tower has a 16-pane sash in
chamfered stone surround to ground and 1st floors. 2nd floor has a side-
sliding sash in chamfered surround. 3rd floor: moulded band, blind 3-light
mullion-and-transom window. Rising out of this bay at corner of east tower
is late-C16 clock tower, moulded band below embattled parapet continues
across towers. The rear: main range has 2 4-light mullion and transom
windows rising through 2 floors representing Sir Thomas Cecil's great
chamber. Left return (west): a full height canted bay to west tower. In
wall to left of this fragments of a large Elizabethan chimneypiece with
caryatids, a central round-headed carriage opening and niche to right with
ashlar surround. Right return: chapel projects on right of tower with
vaulted stores to north. Connecting north-east tower, having chamfered
pointed-arched doorways and chamfered 2-light window openings. Chapel: 2
storeys, 2 bays. Chapel on 1st floor with stores below. Offset diagonal
buttress at east (right) end. Chapel has 3-light windows with
Perpendicular tracery and 4-centre arches to north, south and east sides,
moulded band, embattled parapet. West end of chapel has a 2-storey porch
with 4-centre arched board door under hoodmould in north side and steps
inside leading to west entrance of chapel. Interior of chapel: ceiling
painted by Verrio but completely ruined. Sculpture: C18 oval series of
Dutch religious reliefs and 2 C18 statues to east wall, 2 C18 statues to
west wall. East tower has a large kitchen fireplace arch to ground floor
and a late C16 fireplace to top floor. Main entrance has early C18 open-
well staircase with thick turned balusters. 1st floor has late C16 plaster
ceiling with Geometrical patterns on thin ribs. Panelling and doors of
early C18. Oak spiral stair in clock tower. History: built on the site of
an old manor house in 1430 by 1st Lord Latimer of Snape. Occupied in 1483
by Richard III's mother and wife, and from 1532-42 by Catherine Parr wife
of 3rd Lord Latimer of Snape before her marriage to Henry VIII. The 4th
Lord Latimer's daughter and heir Dorothy married Sir Thomas Cecil of
Burghley, Lincolnshire who enlarged the Castle and added the 4 towers 1587.
The coat of arms of the Nevilles and Cecils are over the front door.
T Horsfall, Notes on the Manor of Well and Snape, 1912.