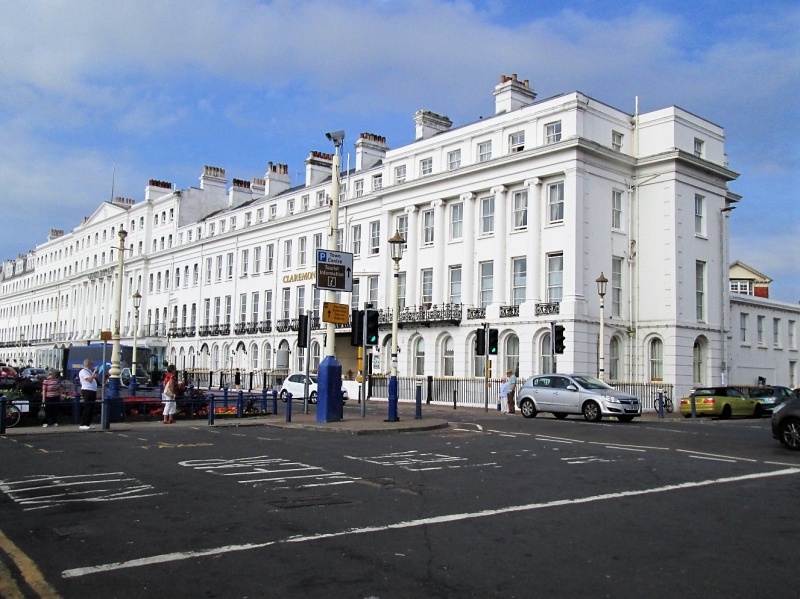 2.
This is the best series of buildings in Eastbourne. It was built between
1851 and 1855 but in character appears 30 years earlier. It is a terrace of
19 houses, of which the Burlington Hotel now comprises 13 (but originally
only the central portion of the terrace). 4 storeys and basement with
area, plus an extra storey to Nos 13 to 23. It is not quite symmetrical,
as originally this extra storey existed on 2 more houses on the West of the
central portion (Nos 17 and 18) than on the East. 3 windows to each house, or
57 windows in all. Stuccoed, ground floor rusticated. Round-headed
windows on ground floor. Iron balconies on lst floor, that on No 6
replaced by a Victorian substitute. Cornice above the 2nd floor, another
with parapet above the top floor; the 2 houses at each end (Nos 5 and 6
and 22 and 23) and the 3 central houses (Nos 13 to 15) of the terrace
project slightly and have Ionic columns from the lst to 2nd floors
supporting the lower cornice with above this a set of plain pilasters
extending to the upper cornice. The centre 5 windows (No l4 and 1 window
on each side) have a pediment over them in the place of the parapet
above the upper cornice. No 14 has also a porch with Doric columns and a
balustrade above its entablature. No glazing bars. Nos 19 to 23 have had
an extra storey added to them in modern times making them the same height
as the central houses, with a mansarded roof and large modern windows.
In No 7 the whole of the ground floor part of the facade has been cut
away to make a recessed hotel entrance to the Claremont Hotel. The 2
adjoining houses of this hotel on the East (Nos 8 and 9) have suffered
war damage. The facades are intact.