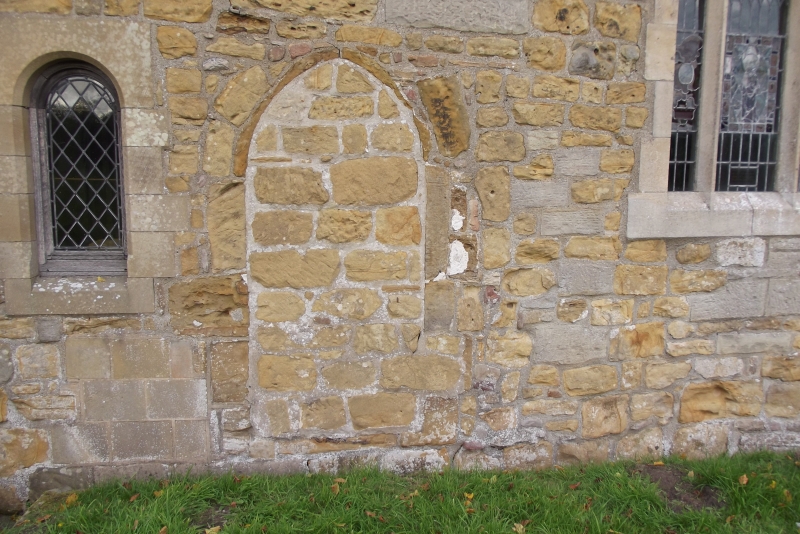 EXTERIOR: The low tower has segmental-arched louvred belfry openings and a shallow pyramidal cap. There is a ground floor segmental-arched window to the south and a two-light segmental-arched west window at gallery level. The nave porch has a Tudor-arched doorway with slit vents to the sides; inside are stone seats, a brick floor and a straight-headed door. The south side of the nave has, to the right of the porch, a two-light mullioned window and coped gables. The north side of the nave has the remains of a blocked arcade with a circular column with moulded capital and square abacus, a chamfered round western arch and a chamfered pointed eastern arch; the former has a chamfered doorway and the latter has a small lancet window with old lead cames and old glass. The south side of the chancel has a blocked pointed-arched priest's doorway flanked by (renewed) mullioned windows, a round-arched single light to the left and a mullion window of three uneven lights to the right. Both nave and chancel have ashlar coping on their east end. The east window has two cinque-cusped lights with quatrefoil above. The rough-cast lean-to vestry has a three-light mullion window.

INTERIOR: Internally the chancel roof, dating from the C17, has curved ribs to the principal rafters rising from Jacobean inverted finials. The nave has old tie beams. The tower arch is segmental and the c.1900 pointed chancel arch is continuously moulded. The lower parts of the walls are panelled, and the arches of the blocked nave arcade are visible on the north wall. There is a stoup on the inner jamb of the south door.

FIXTURES AND FITTINGS: In the blocked western arch of the former north arcade is a medieval grave cover with a floreated cross on a stepped base and a sword. The C14 font nearby has an octagonal bowl moulded around the top, on a narrower octagonal stem. The east window has glass of 1900 by Kempe and in the south-eastern chancel window is medieval glass given by Francis Plummer in 1952. Above the pulpit is a C17 tester with Gothic cresting. The altar rail has twisted balusters and two spiked finials. In the vestry is an old reading desk made up out of early panelling and more altar rails. A royal coat of arms of James I is on the north wall of the chancel; the name is erased from the inscription below, possibly evidence of C17 anti-monarchist feeling.

The nave and chancel of the church of St. Mary Magdalene are dated to the C12, and the north aisle was added in c1200 and blocked up at an unknown post-medieval date. The east wall of the chancel is C13 and there is a priest's door of the C15. The south porch was built in the C18 and the tower rebuilt in 1822. The pews are Victorian and the north vestry was added c.1900. Early C20 photographs in the National Monuments Record show the south-east window still blocked up at that point. Repairs (partly paid for by the Incorporated Church Building Society) took place in 1955 under the direction of Brierley, Syme and Leckenby, York-based architects.

The church of St Mary Magdalene, Thormanby, is designated at Grade II* for the following principal reasons:

* Date: the church contains a considerable amount of Norman and other early fabric
* Architects: the well-known architects Brierley, Syme and Leckenby of York were involved in alterations to the church in 1955
* Fixtures: window glass by Kempe, a tester of the C17 and a font of the C14 are among internal fixtures of special interest
* Historic interest: the successive phases of the church through history are clearly readable in the fabric of the church