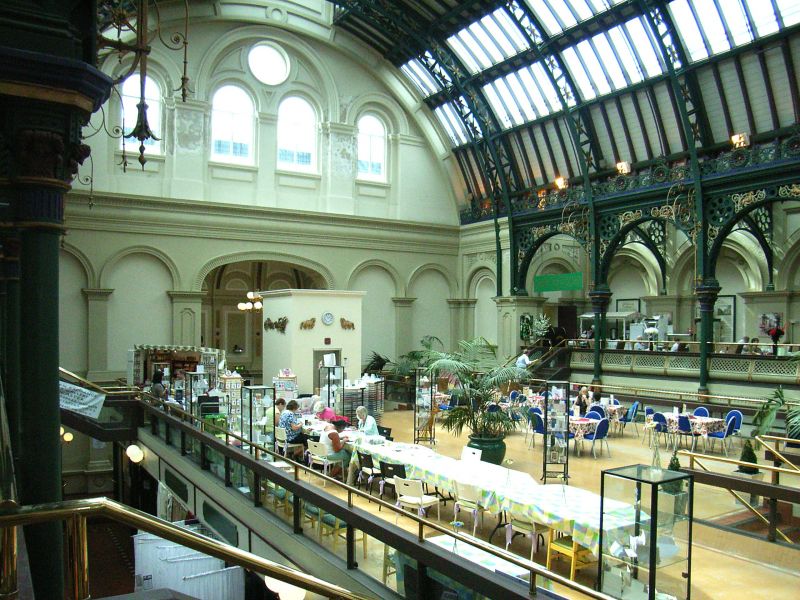 Corn exchange and market buildings, now one market hall. 1847-9 by J
Butterfield (architect to Doncaster Corporation) 1870-3 by William Watkins
of Lincoln and 1930. Ashlar with some red sandstone dressings; slate and
leaded roofs, partly glazed. Irregular plan, original 1849 market hall of
two storey height with U plan, 1870 corn exchange placed within the U and projecting to front, again of two storey height but with taller roof. 1930
market of single storey added to rear of original market hall. Plinth, Rusticated stonework to ground floors of both market hall and former corn exchange. Main north elevation has five central bays of corn exchange
projecting by 3 bays, flanked by 3 bay end elevations of original market
hall. Corn exchange has advanced central and side bays with projecting
stonework to corners, acting as plinths for clasping) corner pilasters and adjacent engaged red sandstone columns to first floor. To ground floor the
side bays have pilastered semi-circular headed doorcases with C20doors and
plain fanlights, central bay has similar doors below entablature supported
by paired engaged polished granite columns. Above, side bays have metal
traceried circular windows in recessed cavetto moulded fluted surrounds
over fluted friezes with central corbelled coats of arms. Central bay has
large lunette window, also in fluted cavetto surround, and archivolt
surmounted by panel of symbolic female figures in relief. Balustrade to
front with plinth inscribed 'Wm Cotterill Clark Mayor 1873'. Bays 2 and 4
have triple semi-circular headed openings to both floors, ground floor with central niches, otherwise With C20 glazing, those to first floor with balustrading to front. Entablature over with modillioned cornice and
triglyphed frieze with paterae to central and side bays, plain elsewhere. Balustraded parapets to bays 2 and 4, side and central bays with panelled parapets flanked by pilastered end piers, those to side bays with acroteria. Recessed behind central 3 bays in large segmental gable, topped by
bracketed pediment. Three bay return elevations in similar style to front elevation. Original market hall has main elevations to the sides, that to
west of 7 bays and that to east of 6. Bays 2 and 6 of west elevation are
slightly advanced, and have large double leaf panelled doors, below
traceried fanlights in archivolts which spring from level of first floor
band. Above each are rusticated voussoirs and a fixed 9 pane window in
plain architrave. To first floor these bays are flanked by paired Tuscan pilasters. Other bays are blind to the ground floor and have large semi-
circular headed first floor sashes with small panes and radial glazing to
the heads. These are set in pilastered surrounds within semi-circular
headed recesses with radiating voussoirs. Entablature above, which
projects over the pilasters. Blocking course with stepped panelled
parapets over bays 2 and 6. East elevation similar but with basement to
north end and one sash less to centre. Hipped slate roofs. Fish Market
has 19 bay pilastrade to main elevation with entablature and blocking
course, most openings now with glazing to top.
Interior of 1847 hall has cast iron columns with foliage capitals
supporting pierced beams and thin iron trusses.
Interior of former corn exchange, - very elaborate. On 3 sides is a
gallery supported on round arched arcade with alternating plain and
panelled pilasters between the arches. Galleries to sides have paired
iron columns with foliage capitals supporting round arched of pierced
ironwork with sumptuous decoration to the spandrels, covered iron
cornice with similar style pierced coping above. Roof has semi-circular
iron trusses with decorative bracing and large central ridge light
supported on foliage trusses. South end of the building has raised
platform in full height basket arched niche which has ribbed and panelled
dome, and panelled and pilastered sides. North end has 6 bay arcade of
round arches and above 3 stepped semi-circular windows with pilastered
surrounds, that to centre wider and with central roundel over paired
semi-circular lights.
Source: 'The Marts and Markets at Doncaster, their rise, progress,
sources and supply' W Sheardown 1979.