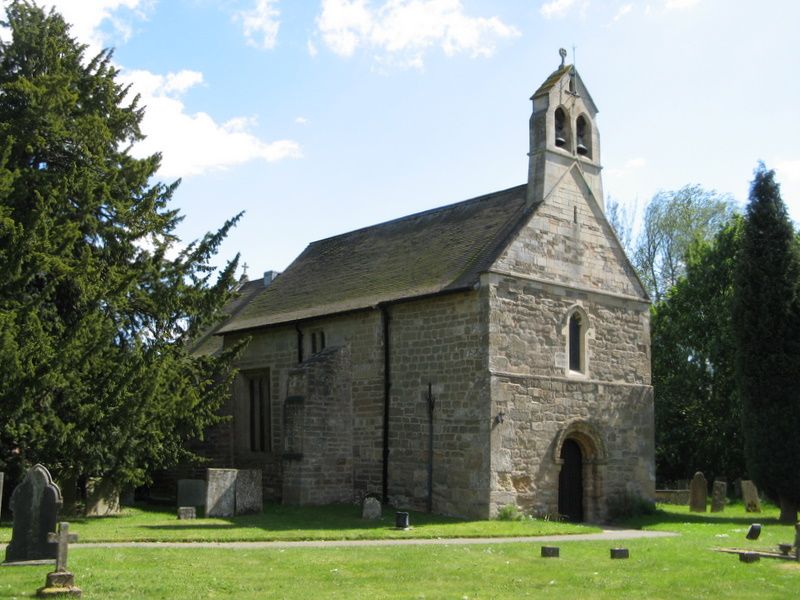 Parish church. C12, C13, C14, C16,C17, C19, chancel rebuilt 1844,
restored c. 1890 by Hodgson Fowler. Ashlar. Plain tile roofs.
Coped gables to west nave and east chancel with decorative ridge
cross to east chancel. Single stack to south nave. West bellcote,
nave and chancel. Gabled and coped C19 bellcote with 2 arched
openings for bells and small arched and cusped opening over. West
wall with bands forming a pediment in the gable. The lower part
of this wall slightly projects. C12 doorway with 2 moulded orders
of chevron, the inner supported on imposts and the outer on
engaged columns with scalloped capitals. The hoodmould has worn
decoration with remains of decorative label stops. Over is a C19
arched and cusped light with hoodmould and in the gable apex a
single small rectangular light. The north nave with large
buttresses has in the west bay, which is slightly set back, a
single small C12 arched light. To the left is a single C16 window
set under the eaves with 2 arched lights under a flat arch. To
the left and lower is a single C13 pointed arched light and
further left a single C17 window with 3 arched lights under a
flat arch. The buttressed north chancel has a single restored C14
arched window with 2 arched and cusped lights, mouchettes,
quatrefoil and hoodmould. The east chancel has a C15 style arched
window with 4 arched and cusped lights. In the apex is a single
small rectangular light. The south chancel has 2 large
buttresses, that on the right inscribed "W.M.I.B.C.W. Anno 1639"
and "? 1682". Between the 2 buttresses is evidence of a single
former pointed C14 south aisle arch now with 2 blocked openings,
that on the right C16 with 2 arched lights under a flat arch and
that on the left arched. Wall to the east here, under the eaves,
inscribed " ? C.B.T.F. Church Wardens 1687". The south nave with
large buttress has evidence of a former C14 2 bay pointed arched
arcade, both arches now with single large tripartite casements
with lead glazingbars. Above that on the right is a single C16
window with 2 arched lights under a flat arch. On the far left is
a single small C12 arched light. Interior. Demolished south aisle
with evidence of 2 bay arcade with double chamfered arches and
moulded capitals. South chancel has an arched recess, originally
a doorway and to the left an arched and cusped piscina, the floor
here having been heightened. In the north nave is a blocked
doorway. Some C18 panelling to nave walls. Late C18 panelled and
painted reredos. Ashlar font with octagonal pedestal and shaped
octagonal bowl. C17 Cover consisting of 8 open painted ribs
forming ogee arches and terminating in an acanthus decorated
knob. C19 choir stalls and pews. In the north nave is a board
detailing benefactions to the parish and dated April 17th 1895.
There is a painting said to be by a 9 year old boy of the church
with ashlar and red brick tower.