A Grade I Listed Building in Hadleigh, Suffolk 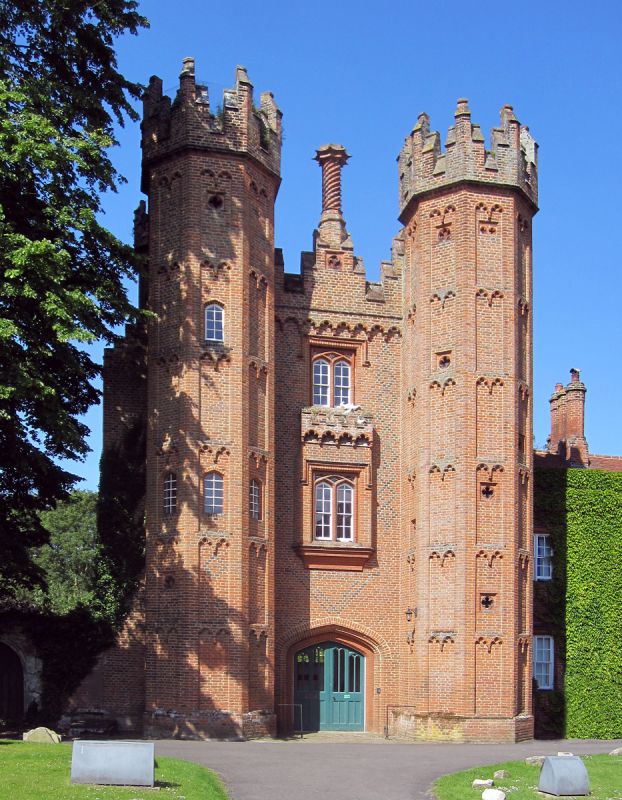 2.
Built 1495 by Archdeacon Pykeham a former rector. Very fine example of late C15
brickwork. It was originally the gatehouse to the Archdeacon's house
(demolished early C19). It is of red brick with black diapering,
43 ft high, 31 ft wide, flanked at the 4 corners by panelled and embattled
turrets. The turrets on the east side are hexagonal and rise from the
ground level, the turrets on the west side spring from a little way below the
corbel table. The carved and moulded brick chimneys in early C16 style were
added in 1830. All the external brick panelling is decorated with trefoil-
cusped heads. Over the entrance gateway are 2 storeys, the 1st with an
oriel window on west side of 2 lights and surmounted by a brick cornice with
trefoil-cusped work. The room has been used as a library and was panelled
in 1730 by Dean Wilkins. There is a curious painting on plaster above the
fireplace of the Church with the river and hills beyond, executed by a local
artist Benjamin Coleman 1629. There are also 2 paintings said to be by
Canaletto who was a guest of Dean Tanner between 1749 and 1751. A small
vaulted oratory with secret chamber is in the south east turret. NMR photos.

All the listed buildings in Church Walk form a group.