A Grade I Listed Building in Thelnetham, Suffolk 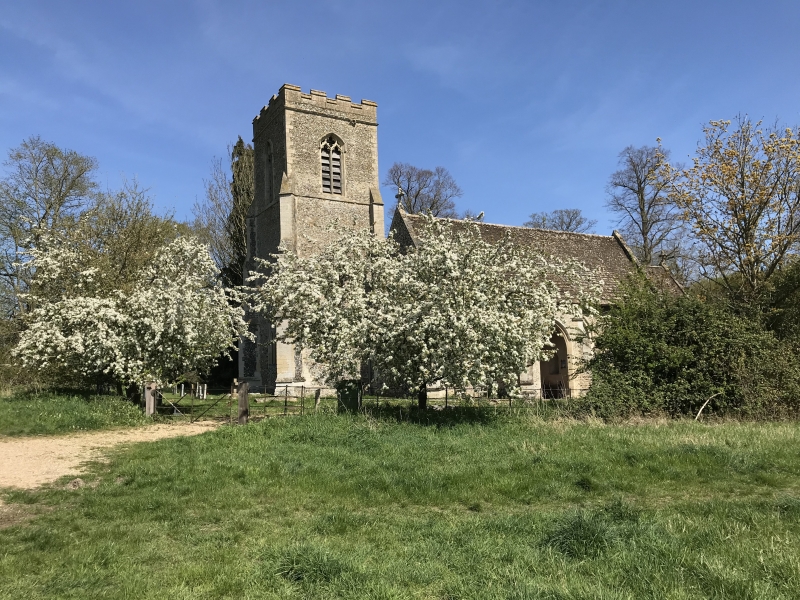 
Parish church. Circa 1300 and later. Nave, chancel, west tower, south aisle
and south porch, mainly in rubble flint, with a small admixture of freestone.
Freestone dressings and facings to some buttresses. Roofs, thatched until the
early C20, now covered in stone slates. The south aisle has a separate gabled
roof. It has very fine windows and is said to have been built by Edmund
Gonville, founder of Gonville Hall, later Gonville and Caius College,
Cambridge, who was rector here circa 1340. A 5-light east window with
fragments of C14 glass and a 3-light west window, both with cusped
intersecting tracery, and 2 2-light windows on the south wall, one with
pointed-trefoiled lights and 3 circles with quatrefoils in the head, similar
to the south windows at Rickinghall Inferior. Plain south porch with diagonal
buttresses, simple pointed arch to doorway, 2 Y-tracery windows with hood-
moulds over, shallow-pitched roof with gable-end cross. South doorway with
quarter-round mouldings, leaf capitals, and an empty cinquefoil-headed niche
above. The 5-light east window in the chancel has an unusual variant of
intersecting tracery: ogee arches to the lights, and small motifs interpolated
in some of the intersecting fields. Tower in 3 stages with an embattled stone
parapet. 2-light Perpendicular west window with empty niche above; a small
circular quatrefoil window to each face of the 2nd stage, and 2-light windows
with intersecting heads to the top stage. Interior much restored in 1872,
when the pulpit and seating were replaced, and again in 1895, when the chancel
was reroofed in Spanish chestnut. Many older features remain: a simple
octagonal font, standing on a large plain column with a low raised base; the
doorways and stair to the rood loft behind the pulpit; C14 arcade in 4 bays on
south side: octagonal piers without capitals, quarter-round mouldings to
arches. In the south-east corner of the aisle a fine angle piscina, restored,
with naturalistic foliage, pointed trefoil arch enriched with dog-tooth
ornament, and a gable with ballflower. Piscina and sedilia also in chancel.
The chancel and south aisle both have medieval stone altars with recut
consecration crosses, which were reinstated during the 1895 restoration. A
large squint at the south-east end of the nave has a small brass with
inscription to Anne Caley (c.1500) below it. On the south wall of the aisle
an alabaster and marble monument to Henry Buckenham (d.1648) and Dorothy his
wife (d.1645): 2 demi-figures in an arched niche with looped-up curtains, and
a son and daughter below in oval niches. On the north wall of nave, an C18
wooden panel with the Flight into Egypt carved in high relief, probably
Italian. The windows contain a particularly large amount of old crown and
cylinder glass. In the floor of the base of the tower are 3 small black tiles,
set diamondwise, and variously inscribed WR1735, SR1744 and ER1721.