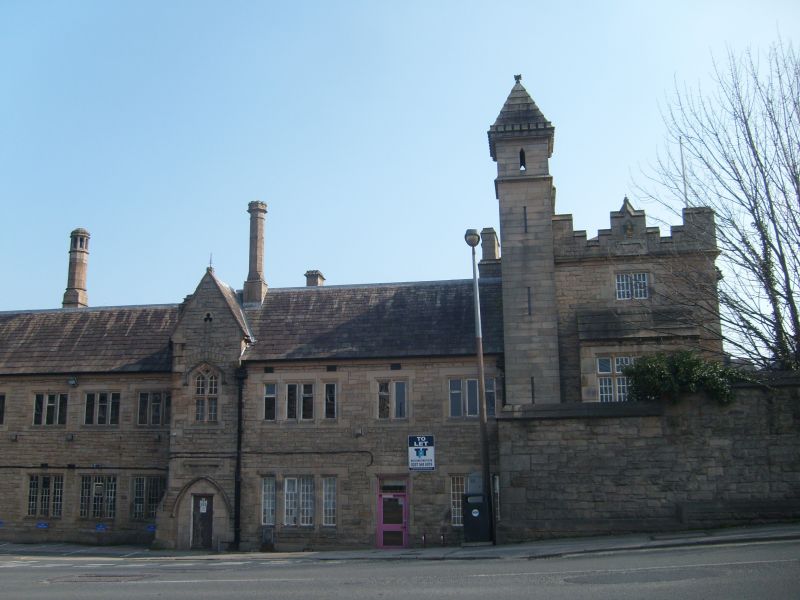 Railway station. 1846, extended 1852 and 1900-6 and restored
c1990. By William Tite. For the Lancaster and Carlisle Railway
Company. Later additions by Austin and Paley. Tudor Revival
style. Roughly squared sandstone rubble in the original block,
and squared and snecked rubble elsewhere, both with ashlar
dressings. Slate roofs in diminishing courses with coped
gables and kneelers. Chimney stacks in picturesque profusion
of position and shape, including 2 with octagonal shafts. The
original building has 5 bays and 2 storeys, extended to the
right by 10 bays in 1852, and to the left with a line of low
outbuildings c1900.
The original building has a recessed centre of 3 narrow bays
between 2 wider gabled crosswings, which have on the ground
floor a pair of 2-light mullioned windows with hoodmoulds and,
on the first floor, a single 3-light mullioned and transomed
window under a hoodmould. The centre has an entrance under 3
Tudor arches, now glazed. Above this are three 2-light
windows, of which the central one is taller, with a transom,
and rises into a gabled dormer. All these windows have double
chamfers.
The 10-bay extension to the right has fairly regular
fenestration, with windows which are taller on the ground
floor than on the first, and mostly of either 3 or 4 lights on
both floors of each bay. The last 5 bays project slightly to
balance the original building. The first of them has a narrow
gable and contains a former entrance with a 2-centred arch and
hoodmould under a scroll; above this is a 2-light window with
a transom and segmental pointed heads under a hoodmould and
relieving arch. The last bay is wider and rises as a 3-storey
block which is detailed to look like a pele tower, (the
station was originally called Lancaster Castle).
It has to the left a tall square turret with a stone pyramidal
roof, and then 2 small windows with shouldered lintels on the
ground floor, a deeply-projecting square oriel on the first
floor with a 5-light mullioned and transomed window, and a
2-light mullioned window on the second floor under stepped
battlements. Under the central merlon a shield bears the arms
of the former Borough of Lancaster above a scroll painted with
the motto 'Luck to Loyne'.
The platform facade has a projecting canopy supported on iron
columns.
An iron footbridge with timber window frames and a felt roof
links the west building with the island platform and with the
higher ground-floor level of the present (eastern) main
entrance, which dates from 1900.
The island platform has 2 single-storey blocks, one to each
side of the footbridge, of rock-faced sandstone with mullioned
and transomed windows and pitched slate roofs. They are linked
by a platform canopy on the west side.
The eastern building has a single-storey entrance facade on
its east side. It is almost symmetrical and has a parapet with
saddlebacked coping. Near the centre are 2 Tudor-arched
doorways. To their right is a 3-light window with 2 transoms,
and 2 cross windows. To their left are 2 window opening, and a
Tudor-arched doorway at the far left. The front wall has 2
rainwater hoppers dated '1900'. A shallow entrance canopy is
supported on iron brackets and has a glass roof with timber
valance.
HISTORY: when the railway line from Preston was extended
through Lancaster over Shap Fell to Carlisle in 1846, this
station was built to replace the original station on Penny
Street, now the Nurses' Home on Ashton Road (qv).