A Grade I Listed Building in Paignton, Torbay 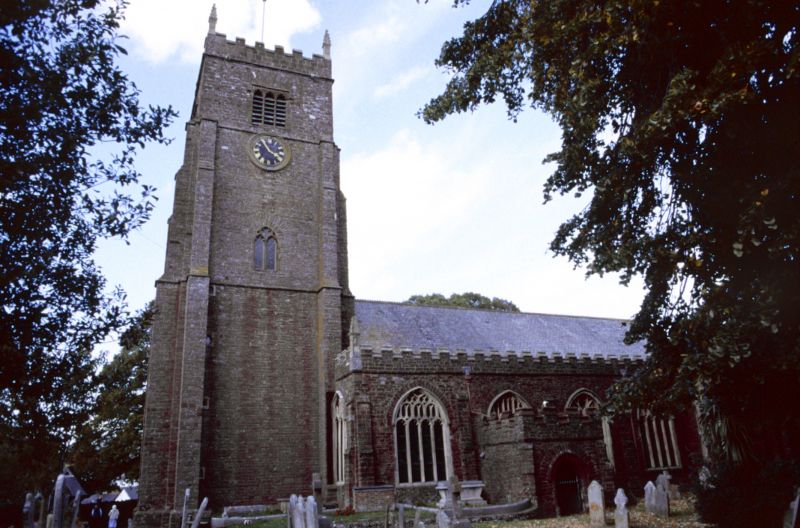 PLAN: one of Devon's larger medieval parish churches. Nave, chancel, west tower, north and south four bay aisles, north and south transepts, south transeptal chapels between aisle and transepts containing the Lady Chapel to the north and the Kirkham chantry to the south; vestry on south side of chancel. Of the C12 church some chancel masonry survives as does the west door, re-set in the C15 west tower. Chancel includes C13 windows; evidence that arcades are C13 in origin, heightened in the C15.

North side of transept almost entirely filled with massive pair of windows with common mullion between but individual depressed segmental-arched heads. Each window three-light and transomed with quatrefoils in the head. Octagonal embattled rood loft stair turret in angle between transept and aisle. Set-back buttresses to north transeptal chapel which has crow-stepped gable, four-light Perpendicular style traceried east and west windows and probably C20 five-light north window. Four bay buttressed north aisle with embattled parapet with medieval beerstone north west pinnacle with crocketed finial. Four-light Perpendicular style traceried windows, one with Y tracery, hoodmoulds and carved label stops. Red sandstone triple hollow chamfered doorway in second bay from the west with probably C16 door of overlapping vertical panels, repaired at the bottom, with variety of latches and dog door. Beerstone ogival holy water stoup, adjacent to doorway. Above the door a short four-light window with a hoodmould with carved label stops. The west window of the aisle is cut in awkwardly behind the junction with the tower. Similar south aisle, also with awkwardly-positioned west window.

Spectacular late C15 chantry chapel, the best in Devon outside Exeter Cathedral, identified by Prince as being the chantry of the Kirkham family of Blagdon (qv Blagdon Manor). A deep stone screen with two Tudor arches contains tomb chests between a central doorway, the whole crowned with masses of pinnacles and carved angels. Recumbent effigies of a lady and knight on the chests, the arches and those of the central doorway with miniature fan-vaulting. Figures damaged, but the minor figures decorating the chest and the iconographic scenes are of a high quality and retain some traces of medieval colour. The iconography is very elaborate and discussed in detail in an article by Rushforth. Inside the chapel a C17 tomb chest to Sir William and Lady Kirkham with two kneeling figures facing one another under flat arches.

Other monuments include a fine gisant in a cusped tomb recess in the south aisle and a foliated cross, re-sited under a moulded tomb recess with carved spandrels in the north aisle. Various wall tablets, including a slate monument with white marble pediment to Thomas Hunt of Yalberton and tablets to the Belfield family of Primley House (qv).

Good collection of C19 and early C20 stained glass including west window of north aisle, signed Heaton, Butler and Bayne and other windows by Hardman and Clayton and Bell. Cope chest at west end of south aisle, made up of fragments of old wood some probably Flemish, with blind tracery. Vestry contains arcade of columns and fine domestic piscina, re-sited here in the early C20, which originated in Kirkham House but was mistakenly thought to have ecclesiastical origins.