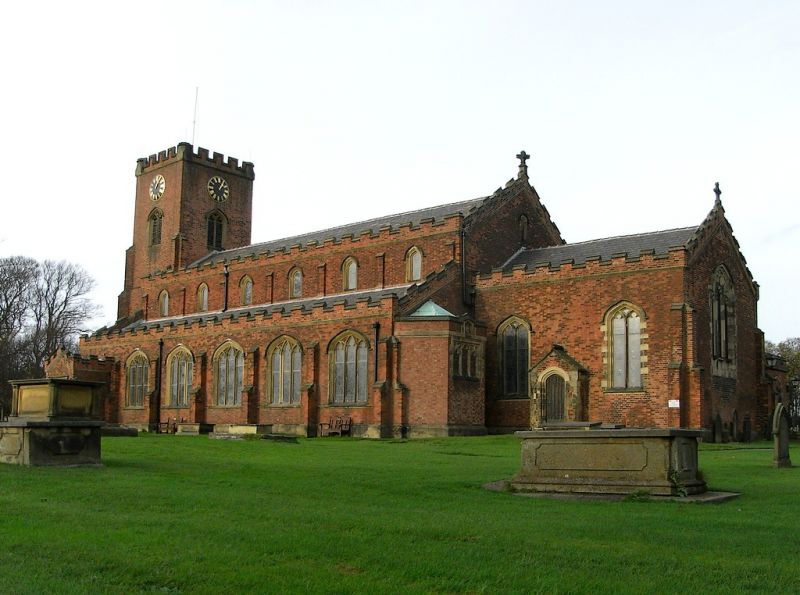 An Anglican church built in 1834-5 to designs by W H Hobden with later C19 and C20 additions by Paley & Austin. It is built in the Perpendicular style using red brick in Flemish bond, with sandstone dressings and slate roofs. The church is sub-rectangular in plan with a chancel, vestry, nave, north and south aisles, porch and west tower.

EXTERIOR: the church has crenellated parapets throughout. The two-bay chancel has two-light windows with a small gabled porch between them on the south side, and an Arts-and-Crafts Perpendicular three-light east window. The corners of the chancel are supported by angle buttresses of three-quarter height. The two bay vestry is attached to the seventh and easternmost bay of the north aisle. It has three-light windows and a door in its west wall. The long north aisle has a stone plinth and three-light windows separated by buttresses. The north aisle's right return has a Perpendicular three-light window. The tower at the church's west end is of three unequal stages with diagonal buttresses, a stone plinth, weathered bands and a crenellated parapet. It has a Tudor-arched west doorway, a two-light west window, two-light belfry windows to each elevation with clock faces above to all elevations apart from the north. On the south side of the second stage there is a diamond-shaped sundial with the gnomon missing. The south aisle is of six bays and is similar to the north aisle with a stone plinth and three-light windows separated by buttresses. It has a gabled porch to its western bay with diagonal buttresses, a Tudor-arched doorway and a crenellated parapet. The left return has a Perpendicular three-light window. The upper walls of the nave have pilaster strips and one-light clerestory windows.

INTERIOR: the internal layout sees a nave with north and south aisles, chancel to the east, tower to the west. The east end of the south aisle contains the Lady Chapel, the east end of the north aisle contains the War Memorial Chapel. The chancel contains an unused early organ while nearby there is a modern Copman Hart organ installed in about 2000. Off the north side of the chancel there are a robing room, the choir vestry and an office. At the west end of the nave there is a small kitchen and staircase to the gallery and tower. The tower houses a ring of eight bells hung in a timber frame.

The principal features of interest are a number of stained glass windows which form a fine and varied collection by a wide range of makers. The east window depicts the crucifixion and is considered to have been made by Powell of Whitefriars, post-1914. It was inserted in 1919, replacing the original east window which is now at the west end of the north aisle. Windows in the north and south walls of the sanctuary depict Grisaille with panels of angels carrying texts from Isaiah 53 and small instruments of the Passion. They are dated 1845 and were made by William Wailes of Newcastle. The window in the south wall in the choir was made by Clayton & Bell in about 1871 and depicts Christ commanding three disciples to "Feed my lambs". The Chapel of the Resurrection (east wall) has a window made by Shrigley & Hunt of Lancaster in about 1890 depicting the risen Christ with two angels.

The five windows in the south aisle, from the east, depict (1) the Parable of the Prodigal Son, probably made about 1890, maker unknown, (2) The Transfiguration of Christ designed by Sir Edward Burne-Jones and made by William Morris & Co. in 1875, (3) The Resurrection made by Hardman and dated 1859, (4) Melchizedek dressed as a bishop, Augustine of Cantaur, and David, considered to have been made by Charles Eamer Kempe in the late C19, (5) The Sermon on the Mount, considered to have been made by Burlison & Grylls and dated 1885.

Windows on either side of the clerestory depict individual disciples and are considered to have been made by Shrigley & Hunt. Other windows include one in the south wall of the west entrance depicting the church and churchyard in front of the church, and one in the east wall behind the organ and in the choir vestry depicting a central light bearing the words "Whatsoever ye do do all to the glory of God" on a framed background of blue.

The church of St Cuthbert is the third church to be built on this site. It was constructed in 1834-5 to a design by the Manchester architect W H Hobden and was enlarged in 1872 by the addition of a chancel designed by the Lancaster architects Paley & Austin. In 1882 the same practice added the north aisle, a vestry and the organ chamber and five years later new seating and a new front to the gallery were added. The church was enlarged in 1909 and in 1931 a memorial chapel designed by the successors in the practice, Austin & Paley, was added.

The church forms a group with a number of nearby Grade II listed buildings including a sundial approximately 3m south-east of porch of church of St Cuthbert, the Laura Janet Memorial, the vicarage, and the Church Lodge to Lytham Hall.

The Parish church of St Cuthbert, built in 1834-5 to a design by W H Hobden with later additions by Paley & Austin, is listed at Grade II* for the following principal reasons:
* Architectural interest: the church of St Cuthbert is a accomplished exercise in English Perpendicular revival by well-regarded architects, W H Hobden and subsequently Paley & Austin;
* Artistic interest: the church houses a notable collection of stained glass windows by highly regarded designers and makers including Edward Burne-Jones, Joseph Hardman, William Morris, J B Capronnier and Charles Eamer Kempe among others;
* Group value: the church forms a group with a number of neighbouring listed buildings including a sundial, the Laura Janet Memorial, the vicarage, the Victory/Parish Hall and the Church Lodge.