A Grade I Listed Building in Fryerning, Essex 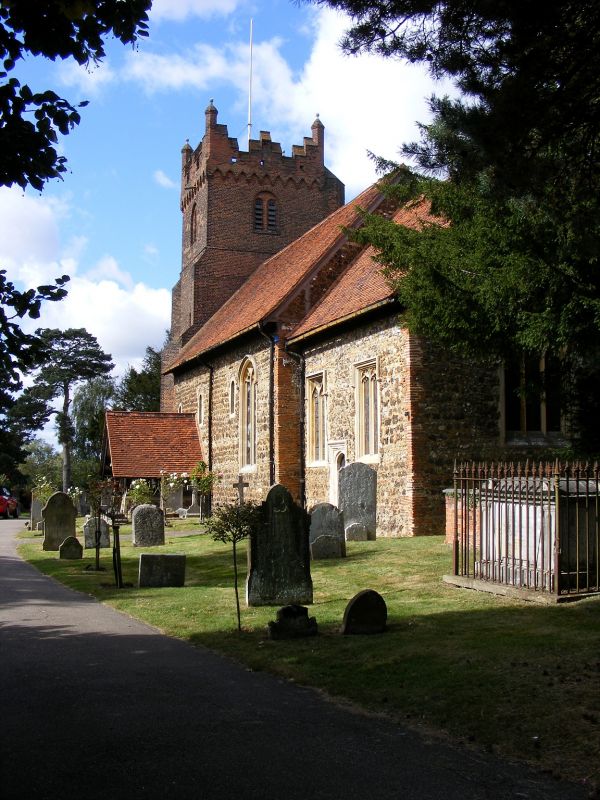 II
Parish church. Chancel and nave late C11, west tower early C16, restored by Wykeham Chancellor in 1869. Chancel and nave of exposed coursed lumps of indurated gravel conglomerate with lacing courses of Roman brick, and some flint rubble; dressings of limestone, clunch and Roman brick, roofed with machine-made red clay tiles. West tower of red brick in English bond. Aligned east north east - west south west in the middle of a high circular churchyard. Chancel of square plan, nave slightly wider, of double-square plan. West tower of square plan with contemporary half-octagonal stair turret to northeast and diagonal buttresses to northwest and southwest. C19 vestry to north, enclosing north doorway, of handmade red and blue bricks and lime mortar in Flemish bond, roofed with machine-made red clay tiles, and lean-to to west, of handmade red bricks with cement mortar, roofed with similar tile. South porch,1869.
CHANCEL: has east quoins of Roman brick. In the east wall is a window entirely C19/20 except the C14 splays and possibly the chamfered two-centred rear-arch. Above it is an indistinct brick arch, the aperture blocked with tiles, and the gable has much handmade brick of indeterminate date. In the north wall is a window, all C19 except the C14 splays and chamfered segmental-pointed rear-arch. In the south wall are two windows, all C19 except the C15 splays and depressed pedimental rear-arch. Between them is a late C15 doorway with moulded jambs and four-centred arch in a square head (with minor repair) and a moulded label; the rubble adjacent to it is patched with C16/17 brick. The chancel-arch is C19.

NAVE: has four quoins of Roman brick. In the north wall are two windows; the eastern is round-headed, C11, much restored, possibly widened, plastered internally; the western is C19 except the C14 splays and chamfered, almost semicircular rear-arch. Further west is an C11 window, round-headed with voussoirs of stone and Roman brick, blocked with C16/17 brick; the wall above has been repaired with C16/17 brick. East of the windows the wall has been thickened internally to enclose a rood-stair, with stepped tabling above, all plastered; the upper and lower doorways are square-headed, restored. Immediately east of the lower doorway is a shallow recess with chamfered jambs and four-centred head, all plastered. Almost below the blocked window is the C11 north doorway, with plain jambs, restored semicircular arch, and high semicircular rear-arch. In the south wall are four windows; the easternmost is C19 except the C14/15 splays and chamfered segmental-pointed rear-arch; the others are C11, round-headed, much restored and probably widened, plastered internally. The south doorway, almost under the third window, is uniform with the north doorway but unrestored except for one stone of the east jamb. A semicircular groove of square section has been cut on the inner face of the voussoirs to receive an iron flange on the head of the door, which is early C18, of oak in eight fielded panels enclosed by ovolo mouldings, having minor repairs; original iron-cased lock and wrought-iron ring-handle of diamond section. Both roofs are C19.

WEST TOWER: red brick with patterns picked out in vitrified black headers; in the south wall this comprises a diamond extended to form a triangle below, and two short horizontal lines within the diamond, probably a symbolic representation of a fish in the vertical position. In the north wall the pattern is indistinct, but may represent a Calvary cross, and initials. It is of three stages with a crenellated parapet which projects on a corbel-table of small two-centred arches, and has stepped merlons, with restored pinnacles at the corners. On the east side the central merlon has a chamfered square panel with a cusped circle in moulded brick; on the south side the central merlon is similarly panelled with a circle and six round holes in moulded brick, possibly the same as that on the east originally; the merlon to west of it has a blank panel, possibly plastered and painted originally; on the west side the central merlon is similarly panelled with a six-pointed star; the merlons on the north side are plain. The brick tower-arch is two-centred and of three orders, the innermost chamfered; it has been repaired at the base, the remainder repointed with cement mortar. The west window is of two restored brick two-centred lights under a two-centred head, all chamfered. The second stage has in the north and west walls a plain rectangular loop, and in the south wall a small window with chamfered jambs and three-centred head, possibly a later enlargement of a third loop. The bell-chamber has in the east wall a window of two round-headed lights in a round arch, all chamfered; in the north wall a single chamfered round-headed light in a common outer order; in the south and west walls a window of two chamfered four-centred lights in a common round arch. There are C20 repairs to the brickwork at the base, mostly below one metre, and minor repairs elsewhere. Original floor of heavy joists of horizontal section, and framed bell-trap.

FITTINGS AND MEMORIALS: piscina in the south wall of the nave, plain round drain and rough arched head, cement-rendered, date uncertain. The font of Caen stone has a square bowl with panelled sides carved with conventional foliage, two stars, whorl, crescent, four small quatrefoils, and two foliated crosses with foliage; lower edge moulded, and rounded at angles to take small round shafts, round stem, c1200, base and side-shafts C19. In the south porch is an indent, much eroded, reported earlier to be C15, a half-figure of a priest and inscription, and three fragments of coffin-lids; two have remains of crosses and the third has part of a lozenge-cross, all with beaded edges, C13. In the vestry, attached in a swivel-frame, is a brass of Leonard Berners, 1563, and Mary (Gedge) his wife, male figure lost except left foot in armour, female figure, and scroll; all palimpsest, male figure on part of fur-lined robe of secular figure, c1500, and female figure on part of widow in horned head-dress, c1460. There are six bells; the first by Robert Mot, 1590, three by John Thornton, 1716, and one by Thomas Mears, 1793. The bell-frame is partly old. Wykeham Chancellor, who undertook the restoration of 1869, believed that the tower was constructed under the direction of Girolamo de Trevizi, architect of Hampton Court, and that he was concerned also in the tower of Sandon church, the clerestorey of Great Baddow church, and the gatehouse of Layer Marney (St. Mary's Fryerning, unsigned, possibly by the Reverend William Mellor, undated).