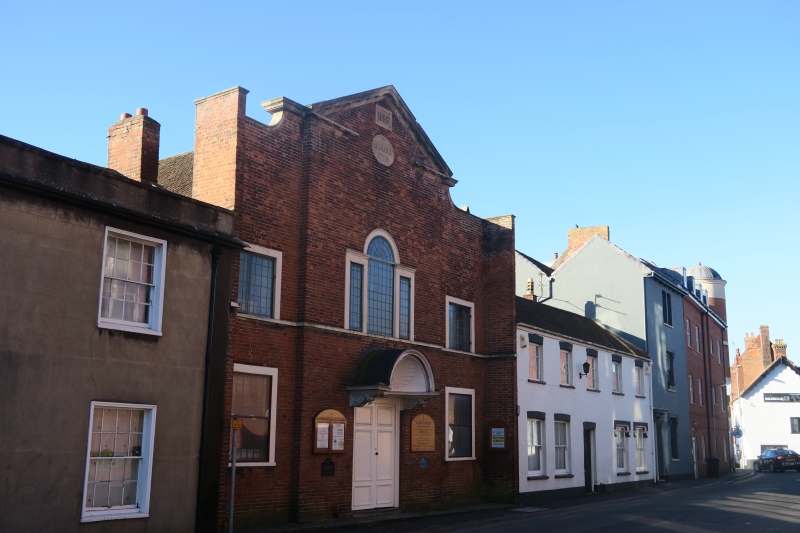 Unitarian Chapel. Dated 1688, rebuilt 1788. Flemish bond
brick; stone coping, cornice to open bracketed and dentilled
pediment, plaques, architraves and cill band; pantile roof.
Rectangular plan with late C19 schoolroom to rear right. 2
storeys; symmetrical 3-window range. The windows have plain
architraves with bead edges and late C19 leaded lights with
narrow margin panes. The facade, set back approx 1m from the
adjacent buildings and built up higher than the gable behind
it, has a stone-flagged forecourt with traces of former
railings.
The central bay beneath the open pediment is stepped slightly
forward; two date plaques in the typanum and a Venetian window
to first floor above a handsome shell hood, (probably from the
late C17 building), and C20 three-panel double doors. The bays
flanking centre have a short returned cornice to each side of
pediment from which high parapet walls sweep down to meet
forward-projecting walls which flank forecourt; 2-light
casement windows to first floor and fixed lights of same width
to ground floor.
INTERIOR: mostly of 1788 character, re-floored and reglazed
late C19, recently restored. The doors, panelled on outside,
have diagonal planking to back with full-width hinges and fine
wrought-iron bolts to top and bottom. Floor of entrance hall
and chapel of late C19 polychromatic tiles with elaborate
pierced cast-iron continuous heating vent along the aisles.
4 full-height stone Tuscan columns with fluted capitals
support the flat-ceilinged aisles and barrel-vaulted nave;
aisles have dentilled moulding to the frames of tripartite
skylight of 4 panes to centre and simple guttae cornice; nave
has several pierced ceiling roses, some for ventilation, some
had former pendant gas lights.
Singers' gallery against front wall is supported by cast-iron
Tuscan columns with fluted capitals and panelling to front; a
late C19 organ stands on ground to centre, opposite the door.
Complete range of late C19 box pews with reset C18 panelling;
these have raised-and-fielded panels, raised H hinges; doors
open flat, allowing passage down the aisles and elaborate
Roman numbers to each pew in gold leaf; those in the aisles
are higher and probably late C18.
The small pulpit to rear centre is virtually an elaborate
single box pew on stone plinth, raised on dais of 3 steps;
pyramidal panelling to front, large scrolls to side of seat
and a knob to the right by which the preacher could control
the gas lighting of whole chapel.
The late C19 schoolroom to rear right has a queen-post roof
and tongued-and-grooved planked panelling below a high dado
rail.
C18 and C19 wall tablets include one to George Lewis Browne
who brought Nelson's body back to England: it reads "Captain
Browne obtained the trust and highest commendation of Admiral
Lord Nelson under whose immediate command he distinguished
himself at the Battle of Trafalgar."
History: Outside to right of door is a painted panel claiming
it to be the oldest non-conformist chapel in Bridgwater, to
the base it reads "This congregation was founded by Admiral
Blake's friends and associates when the Rev. John Norman, his
former protege, was ejected from the parish church in 1662,
after the restoration of the monarchy in 1660". The chapel was
sacked by the authorities in 1663 and the contents burned on
the Cornhill. A bronze plaque to the left of the door reads
"The poet Samuel Coleridge Taylor preached in this church on
Sunday 4th of June 1797 and Sunday 7th of January 1798".
(Stell C: Non-conformist Chapels and Meeting-Houses in SW
England: London: 1991-: 167-8; Buildings of England: Pevsner
N: South and West Somerset: London: 1958-: 97; VCH: Somerset:
London: 1992-: 235).