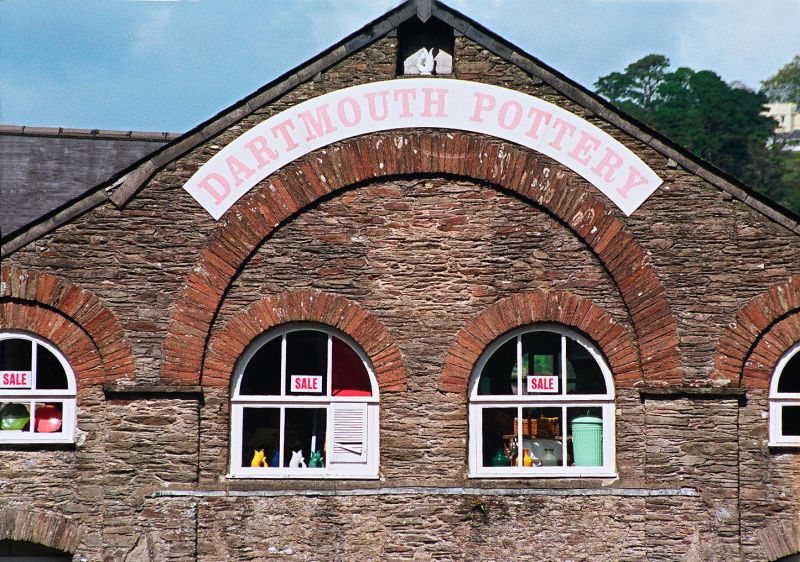 Warfleet Brewery, now a pottery. Dated 1819, with some later
C19 and C20 alterations. Local stone rubble with a more
red-brown rubble reserved for voussoirs; single brick
chimneyshaft, any other stacks are disused; slate roof.
PLAN: Large rectangular building built down the hillslope.
EXTERIOR: 4 storeys with attics and basement. 2:3:2-window
west front. All the original openings have low segmental-arch
heads, most are partly blocked and contain plain narrow
horizontal windows. Left 2-window section most altered with a
ground-floor C20 garage door, four 6-pane sash windows and a
couple of oculus windows to the upper floors, mostly ignoring
the original openings. Centre section broken forward very
slightly under a gable with giant full-height pilasters to top
round-headed arch. Here there is a central doorway at
second-floor level, now to an iron bridge to the raised
embankment of Weeke Hill (dating from 1863). Above it a
loading hatch, and above that a datestone inscribed 1819 with
the initials "A.H.H." Deep eaves carried on large shaped
timber brackets and gable-ended roof. Both end walls in the
same style; 1:2:1-window ranges divided by giant pilasters to
round arches and top windows with round-headed arches. Because
of the slope, the ground-floor level is buried at the uphill
(right) end, whereas the left end has a broad blocked arch to
the basement.
INTERIOR: Only partly inspected. Plain, strong utilitarian
carpentry exposed. To ground floor, large square beams
supported on a series of timber posts, and upright joists with
criss-cross bracing. Second-floor crossbeams of large
scantling here with large bead mouldings to the soffit. Roof
not inspected.
This old brewery plays an important role in the Warfleet area,
an industrial building to contrast with the later houses.