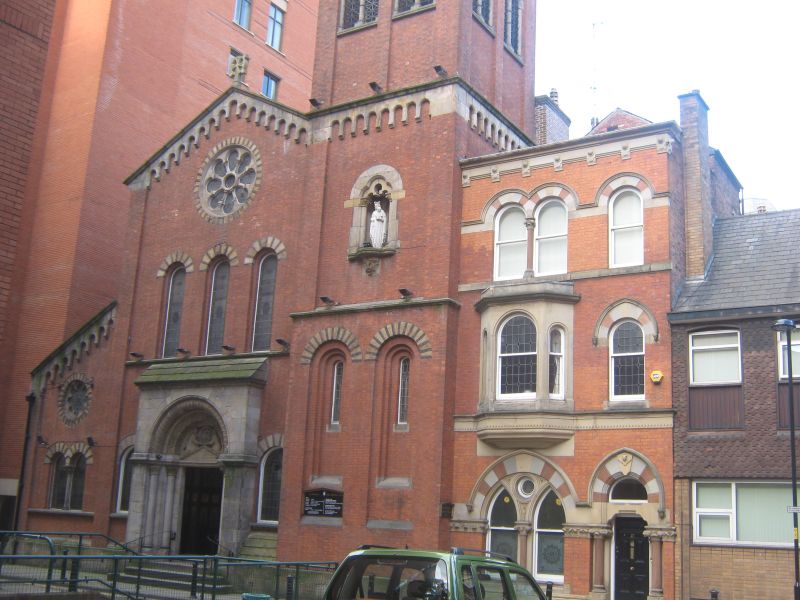 Roman Catholic church, 1844 to 1848 by Weightman and Hadfield in a Rhenish Romanesque style.

Roman Catholic church, 1844 to 1848 by Weightman and Hadfield in a Rhenish Romanesque style.

MATERIALS: red brick with sandstone dressings and a slate roof.

PLAN: the church is built north-south with the main entrance on Mulberry Street to the south and the sanctuary facing north, but liturgical compass points are used for the description below.

The church has a basilican form with a unified, seven-bay space of a nave and sanctuary with aisles, side chapels at the east end of the aisles and a square tower at the west end of the south aisle. There are clerestory windows above the aisle arcades and a large, octagonal lantern over the nave lighting the interior in its built-up urban setting. At the west end is a gallery with an entrance lobby beneath and an oratory on the south side, within the south aisle, reached either from a staircase in the church tower, or from a doorway in the presbytery attached on the south side (cardinal east side); the staircase also gives access to a large meeting room inserted above the south aisle of the church. The sacristy and internal access to the presbytery, and the confessionals open off the south side of the south aisle.

EXTERIOR: the church is built of red brick in Flemish bond with banded stone and brick heads to all the round-headed windows and arches. The west, front elevation has a stone plinth and stone Lombard friezes to the eaves of the north aisle and nave, and round the top of the second stage of the tower. The nave has a projecting, stone doorcase with four steps, moulded impost band and eaves cornice and a large, round-headed doorway with engaged columns with foliate capitals, enriched voussoirs and an inset, sculptural tympanum with a triangular pediment with Latin inscription surmounted by two kneeling angels holding a roundel containing the Lamb of God. It has timber double doors with highly-decorative ironwork strap hinges. Above the lean-to doorcase roof are three tall, round-headed lancets, with a wheel window with a banded frame to the gable. The aisle to the left has two round-headed windows with a central column shaft and a simple rose window with banded frame above. The square tower to the right is of three stages. The first stage has two tall round-headed arches containing very small lancets. The second stage has a stone niche with a lobed head and engaged side columns, with a foliate corbel supporting a shaped, moulded sill on which a statue of Mary holding the Baby Jesus stands. The belfry stage has coupled round-headed blank arches each containing two round-headed windows with a central column shaft, with cast-iron diamond lattice grills. Above the moulded cornice is a steeply-pitched helm roof with three stepped, round-headed lancets to each gable.

INTERIOR: inside the main, west entrance is a small, timber and glazed lobby with a mosaic floor with the words Ave Maria and a panelled ceiling. The lobby screen walls have a timber frame with a door to each side. Lower panels are set with diagonal planks, above which are bands of glazed panels with decorative leaded and stained glass patterns. The interior has plastered walls with very tall arcades with round arches and columns raised on high, square bases with carved stone Byzantine or Romanesque capitals and shafts painted to resemble marble. The side chapels are each separated from the sanctuary by a stone screen with round arches and marble columns set into the easternmost arcade arch. Beneath the clerestory windows on each side is a moulded cornice and a frieze with a Latin inscription, continued across the east wall of the sanctuary. The high roof has shallow queen-post trusses with king-struts set on corbels with a panelled ceiling. In the centre is a large, octagonal-domed lantern with leaded and stained-glass patterned lights. Windows throughout the interior have similar leaded and stained-glass patterned lights with the exception of a window in the south side chapel, which has stained glass of the Virgin, probably 1860s by Hardman. The sanctuary has an elaborate stone and marble reredos and integral high altar with high-quality statuary of the Sacred Heart and Saints topped by angels. The side chapels have similarly elaborate reredoses. The north side chapel reredos has a Pieta centrepiece. The chapel is lit by two roof lights. The south side chapel reredos has a Madonna and Child in a tall, central tabernacle with flanking scenes of the Birth of Christ and Christ in the Temple. The chapel is lit by two roof lights. The west gallery has a timber, panelled front. The south aisle contains an elaborate, round font with relief-carved Biblical scenes raised on marble columns situated close to the side chapel. There is a round-headed doorway at either end opening into the presbytery and sacristy, with three square-headed confessional doorways between. At the west end of the south aisle is a first-floor level, timber oratory. The oratory has canted sides, with lattice-work timberwork beneath a continuous row of vertical rectangular windows with arched heads, with leaded and painted glass, and a brattished cornice. The staircase in the church tower is closed off with a decorative ironwork screen incorporating a door. The oratory contains a small, but elaborate stone and marble reredos and integral altar with relief-carved scenes and tabernacle with painted door, with a statue tabernacle flanked by carved angels.

St Mary’s was the second Catholic church to be founded in Manchester replacing St Chad, Rook Street, which was built in 1794 to extend the ministry to a fast-growing settlement. An historic drawing shows a classically detailed building with a triangular pediment, two outer doorways and round-headed windows, with a narrow presbytery on the east side, of two bays and three storeys over a basement with a raised ground-floor doorway with a flight of steps. In 1833 the partial collapse of that church, together with the great increase in population, led Fr Matthias Formby to commission a new church by Weightman & Hadfield of Sheffield. The church was completely rebuilt from the foundations between 1844 and 1848 to a modified design by M E Hadfield which had been published in ‘The Rambler’, a Catholic periodical. That design attracted the attention of A W Pugin, who then wrote a pamphlet denouncing its design and that of other churches which failed to conform to the ideals of English Gothic architecture and the medieval precedent that he championed. The choice of Rhenish Romanesque, including features such as a helm tower, polychromatic stone and brickwork, and a Lombardic frieze, was both anti-Puginian and novel; the helm tower was the first identified revival of this form, known only in England from the medieval church of Sompting, Sussex. More probably, here it reflects the same interest in Continental styles later promoted by John Ruskin, perhaps under the influence of George Goldie, at that time an assistant at the firm who later became a partner and was a noted ecclesiastical architect in his own right. It had few immediate Catholic imitators, though Goldie later developed the style in Ireland. The church was opened on 19 October 1848. It is not known whether the original presbytery remained unaltered.
There was a major investment in the church during the 1870s. A fine scheme of marble and Caen stone statuary comprising altars and reredoses by the sculptor Mr Lane of Preston, was commissioned by Fr Newton. The adjacent presbytery was also built or remodelled with a new Venetian Gothic façade (separately listed). An oratory was formed over the end of the south aisle which could be reached from the presbytery. The timber lobby to the main entrance may also have been installed at the same time. It was during this period that the church first became known as the ‘Hidden Gem’, an appellation attributed to Bishop Vaughan, who obtained a medieval font for the church and is said to have added the present main carved doorway, both originating in Germany.

After the First World War a large memorial meeting room was constructed above the south aisle of the church accessible by an internal stairwell in the church tower, as well as from the second floor of the presbytery (included in the presbytery List entry).

A post-Vatican II reordering of the church led to the introduction of a new lectern and altar. The reredos was left intact and the high altar was reduced, keeping the carved frontal. An elaborate altar rail and pulpit were removed, and a large painting of Christ and trumpeting angels above the sanctuary reredos was overpainted.

The church was subject to a thorough restoration between 1993 and 1994. Stations of the Cross were commissioned from Norman Adams RA (1927-2005), professor of painting at the Royal Academy and noted religious artist, which were installed in 1995.

The Roman Catholic Church of St Mary (The Hidden Gem), Mulberry Street, Manchester, of 1844 to 1848 by Weightman and Hadfield is listed at Grade II* for the following principal reasons:

Architectural interest:
* the church is designed in an unusual Rhenish Romanesque style with a distinctive and eye-catching helm tower and a basilican form which successfully addressed the issues of the densely built-up urban site;

* the interior is striking in appearance with notably tall arcades with Byzantine or Romanesque capitals and lit by large clerestory windows and a central, octagonal-domed lantern;

* a major investment in embellishing the church in the 1870s resulted in fittings of the highest quality, including a particularly fine and intact scheme of marble and Caen stone reredoses demonstrating a high degree of craftsmanship in their execution, an unusual raised timber oratory, and the ornately-carved main doorway and elaborate font, both brought from Germany by Bishop Vaughan.

Historic interest:
* the church was designed by the well-known and highly-regarded Sheffield architects’ practice of Weightman and Hadfield, who designed many (now listed) Catholic churches, including the Cathedral Church of St John, Salford (Grade II*);

* the Continental styles chosen for St Mary (The Hidden Gem) was an anathema to A W N Pugin the great pro-Gothicist, who published a pamphlet denouncing its design, but while the Gothic Revival was the dominant Catholic style of the C19, the church was the precursor of churches designed in Italianate, early Christian, basilican and Romanesque styles, the most influential being Westminster Cathedral, built in an ‘Italo-Byzantine’ design in 1895 to 1903.

* the appellation of ‘The Hidden Gem’ dates from the major 1870s embellishment of the church and was particularly apt after the extensive addition of notably high-quality fittings.

Group value:
* St Mary (The Hidden Gem) has a functional and visual group value with the attached Venetian Gothic presbytery built in the 1870s.