A Grade I Listed Building in Ampton, Suffolk 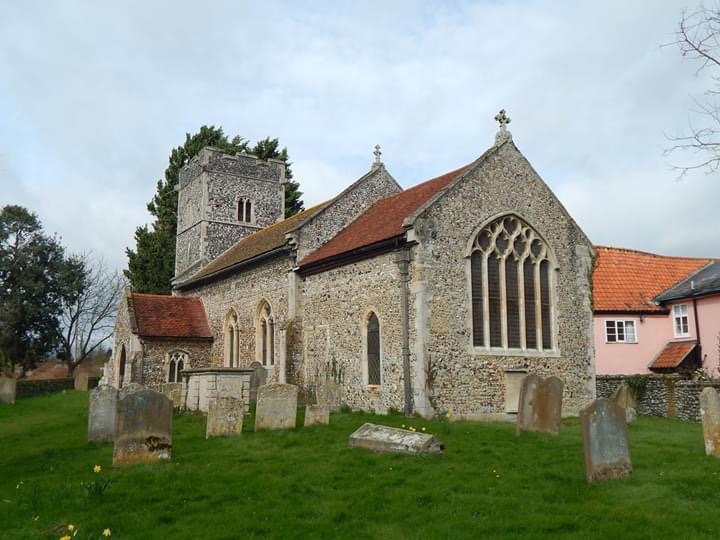 Parish Church. C14 and C15. Restored mid-C19 by S.S. Teulon and again in
1889. Nave, chancel, north chantry chapel, south porch and west tower. Random
flint with freestone dressings and plaintiled roofs. The south wall of the
nave has the remains of coursed flintwork. 2 2-light windows on the south
side, and one on the north, are mid C19 replacements in the Decorated style.
The south wall of the chancel has a blocked priest's doorway with remains of a
rectangular stone surround, and a single-light pointed window, with the cusping
almost completely destroyed. A 5-light mid-C19 east window with reticulated
tracery. Square, unbuttressed west tower in 3 stages, in knapped random flint.
On the south side, a small stair turret is linked to the west end of the nave.
Inside, 2 funeral hatchments on walls. The late C15 south porch, considerably
restored, has an open timber roof with embattled ornament on the cornice.
Various graffiti on the window jambs, the earliest dated 1580, E.F. Severely
plain C13 south doorway. Inside the nave there are remains of wall-painting
and consecration crosses on each side of the west tower arch. On the north
wall: Carolean Royal Arms, fret cut; a memorial to James Calthorpe, 1784: a
simple C20 tablet commemorating Jeremy Collier, bishop and historian, rector of
Ampton 1679-84, and a fragment of C15 brass. By the north chapel, a stone slab
with another fragment of brass. The chantry chapel has an entrance arch with
rectangular head inscribed CAPELLA PERPETUE CANTARIE JOH'IS COKET, and was
built in 1479. The 4 C19 restored windows contain old armorial glass of the
Calthorpe and other families. A medieval stone coffin lid is let into the east
wall. C20 mosaic on the west jamb of the entrance arch records the use of
Ampton Hall as a war hospital 1915-1919. In the south wall of the nave: the
remains of a holy water stoup, and the memorial to Dorothy Calthorpe, 1693,
with kneeling figure. Simple early C18 pulpit with sounding-board and the
remains of the rood loft stair behind it. Roof, benches, and font all C19. The
chancel has a late C15 timber roof, with arched braces and embattled collars,
brightly painted in C17 with strapwork decoration. Plain piscina. C18
Communion rails with turned balusters and moulded handrail. Monuments on the
north and south walls: William Whettell, 1629, by Nicholas Stone, and Sir Henry
Calthorpe, 1640, by John & Matthaias Christmas. The church owns a copy of the
rare 'Sealed Book' of 1662.