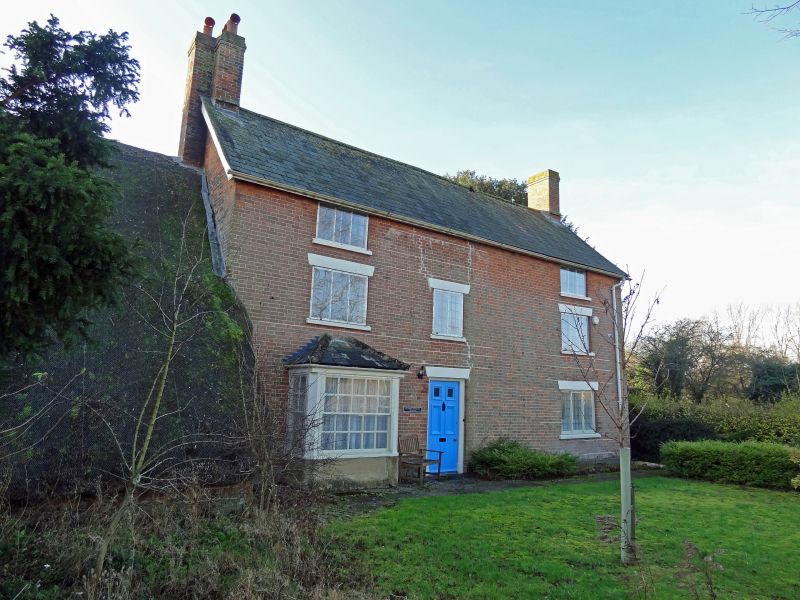 II
A C17 farmhouse with an adjoining early C19 house, now used as a museum.

EXTERIOR: The C17 house is built of limestone rubble with a thatched roof and brick gable stack. The low, one storey building, with attic above, has a two-bay east front with a central entrance porch (added later) and an early C19, slate cat slide extension to the south and west ends. The early C19 farmhouse is attached to its west. It is a three storey building constructed of Flemish bond brickwork with a slate roof, with brick chimney stacks at both gable ends. The north front has three bays with an entrance left of centre comprising a six-panelled door with splayed stone lintel, flanked to the left by a hipped bay window with twenty-pane sashes and to the right by a three-light leaded timber window with a splayed stone lintel. Above the entrance on first floor level is a two-light leaded timber window flanked on either side by three-light leaded windows, all with splayed stone lintels. Above the latter at attic level are two smaller three-light leaded timber windows. The rear of the house to the south has scattered fenestration, and the west gable end has two-light timber windows to the right on first floor and attic level.

INTERIOR: The C17 farmhouse has been significantly altered and restored in the C19 and C20. The early C19 house has panelled window reveals on ground and first floor levels. There is a contemporary inlaid slate fireplace on ground floor level and in the first floor bed room a timber fire surround with grate and a built-in six-panelled wardrobe.

SUBSIDIARY FEATURES: The garden, orchard and farmyard at the Richard Jefferies Museum, enclosed by a stone wall along Marlborough Road (moved and rebuilt in the mid C20), contain a series of outbuildings and structures dating from the C19 some incorporating earlier fabric possibly dating from the C17 or C18, including a dairy (re-roofed in the mid C20), a barn with a stable (and hayloft above), a pigsty, a workshop, a garden bothy, a ha ha and a boundary stone (the latter was moved from elsewhere on the former estate).

HISTORY: The farmstead, originating from the C17 and formerly known as Coate Farm, is the birthplace of the nature writer Richard Jefferies (1848-1887)and which is thought to have formed the main inspiration for his books. In the mid C20 it became the Richard Jefferies Museum.

SUMMARY OF IMPORTANCE: The Richard Jefferies Museum is a C17 farmhouse with an adjoining early C19 house and associated outbuildings and structures, forming an interesting historic farmstead. The various buildings show how this farmstead evolved over time, and it is also an interesting surviving example of a group of vernacular buildings on the outskirts of Swindon. Additionally, the farmstead is the birthplace of the nature writer Richard Jefferies (1848-1887), and together with its surrounding landscape, in particular the Coate Water Reservoir, it formed the main inspiration for Jefferies' books, including Bevis and Amaryllis at the Fair.