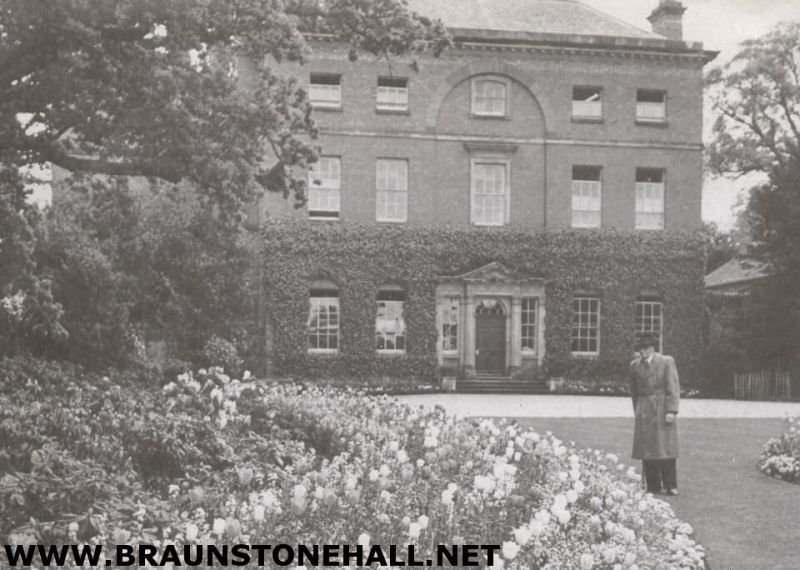 MATERIALS: Built of brick and stone with hipped, slate roof

Side elevation similar general character; two projecting chimney breasts each; the west side with a later three-storey wing. Park front, as entrance front but with no central recess. The central window on each floor has a moulded stone architrave, that on first floor with frieze and cornice, the top floor cased, and the ground floor with a central doorcase with architrave and pediment. Wing set back to left dated 1911, two sash windows, three storeys, similar general style, stone modillioned cornice and blocking course, hipped slate roof. Set in landscaped park.

INTERIOR: Hall with marble Ionic columns, contemporary staircase and iron balusters, more plain at the upper levels. Ground floor room with moulded cornice, frieze, and fireplace, doorcases with carved cornices and friezes. Entrance opened up into the reception rooms either side. Many original fire surrounds surviving throughout. Brick vaulted cellar.

HISTORY: Braunstone Hall built in 1776 for Clement Winstanley by a local architect and builder William Oldman (later Lord Mayor of Leicester). The hall was built on a rise overlooking Charnwood Forest and set in 100 acres of parkland. Clement died in 1808 and the next to become heir was his eldest son Clement, J. P., Lieutenant Colonel of the Leicestershire Militaria from 1802-9. He was also the Chairman of the Leicester and Swanington Railway which opened in 1832. He died unmarried in 1855. After a brief spell in the ownership of his nephew James Beaumont, Braunstone Hall passed to James' sister Anna Jane Pochin. In 1904 Anna relinquished the estate in favour of her son Richard Norman who changed his name by deed poll to Winstanley. In 1911 he extended the south side of the hall by adding a wing with toilets and bathrooms. The initials W, R&K and the date are evident in the brickwork. In 1925 while still in residence Leicester Corporation compulsory purchased Richard Winstanleys' land in Braunstone for much needed housing.

REASONS FOR DESIGNATION
Braunstone Hall is designated at Grade II for the following principal reasons:
* It is an C18 house which has survived well with a good interior
* The architect was William Oldman, later Lord Mayor of Leicester, which adds interest.