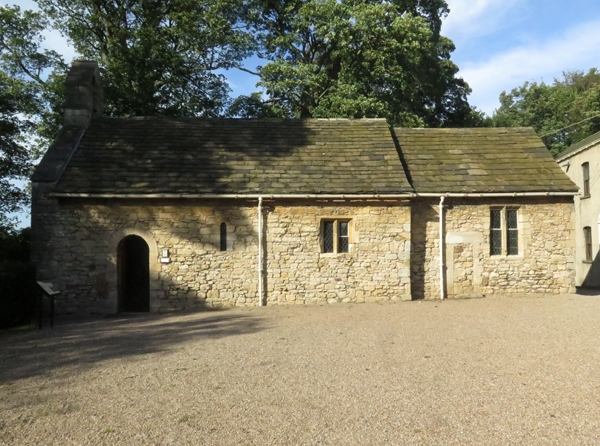 Chapel. Probably late C12; remodelled in C18, restored 1917. Magnesian limestone
rubble, stone slate roof. Small building consisting of nave shortened at west
end in C18 with gable bellcote and short chancel. South side has a C12 round-
headed lancet in the centre of the nave, an inserted or remodelled round-headed
doorway to the left and a restored 2-light chamfered-mullion window to the
right, a blocked square-headed priest door to the chancel and a tall 2-light
mullioned window to the right of this. East end and north side of chancel
each have a lancet like that to the nave; north side of nave has a doorway
with square-recessed jambs which have stiff-leaf capitals to former nook-shafts,
and a round-arched head with elaborate roll-and-casement moulding; the masonry
this side is rubble in the lower half and large blocks above. West gable wall
has an inserted window with depressed-arched head. Interior: nave has 2 queen-
post roof trusses, chancel has 2 king-post trusses with A-struts and longitudinal
braces to the ridge, one of these against the gable wall; lancet windows have
deep splays with painted masonry lines restored; chancel arch replaced by square-
headed opening with wooden lintel; in chancel, a primitive square aumbry recess
on each side; C17 octagonal wooden pulpit with carved panels and sounding board,
and matching reading desk. Various wall memorials, mostly to members of the
Gascoigne family, but one to a pilot of the 1st World War killed in a crash
in the grounds of Lotherton Hall. At west end of nave a small stone pillar
stoup with scalloped cap; in chancel, a heavily carved C16 German altar table
(ex situ).