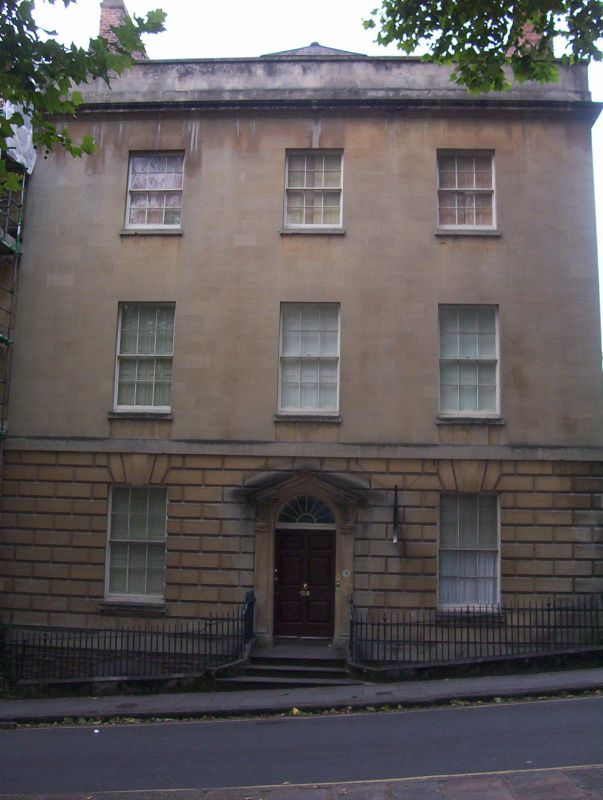 901-1/15/98 GREAT GEORGE STREET
08-JAN-1959 (Southeast side)
7
THE GEORGIAN HOUSE ATTACHED FRONT AREA
RAILINGS AND REAR GARDEN WALLS
(Formerly listed as:
GREAT GEORGE STREET
7
THE GEORGIAN HOUSE)
II*
7 Great George Street is one of a number of five- and three-bay detached houses on the south-east side of Great George Street, built c.1788-90 and shortly afterwards by William Paty, to the specifications of the individual client, several of which are listed; number 7 was built for John Pinney. The house was given to the city of Bristol in 1938, and is now a museum, known as The Georgian House.

SUBSIDIARY FEATURES: Attached cast-iron front area railings and gates curved up to the door; detached rubble boundary wall to south west. The house is one of a number on this side of the street built at the same time by William Paty; nos 3, 23, 25 and 27 are listed; the coach house of no. 25 is also listed. Opposite the Georgian House is the Church of St George (q.v.), built by Robert Smirke 1821-3, which is now a concert hall.

HISTORY: 7 Great George Street (originally no. 3) was built for John Pinney (1740-1818), owner of several sugar plantations in the West Indies. From 1762 to 1783 Pinney lived on Nevis, running his plantations, but 1783 he returned to England with his household, settling in Bristol. There he established a business as a sugar factor, in partnership with James Tobin, a former neighbour from Nevis. The pair acted as agents and moneylenders for planters. The headquarters of the firm was Great George Street, and it is thought that what is now the ground-floor study, with its built-in bookcases and safe, was the office. The house was also a focus for social and cultural exchange, Pinney's circle including William Wordsworth, Samuel Taylor Coleridge, Robert Southey, and Horatio Nelson. An indication of Pinney's habits is given by the large plunge pool he commissioned in the basement; a letter of 1760, written when he was apprentice to a warehouseman in London, mentions that he found a daily cold-water plunge bath to be 'of great service'. Besides the house in Great George Street, Pinney and his family lived at Racedown in Dorset and Somerton Erleigh in Somerset. 'My greatest pride', he once remarked, 'is to be considered as a private Country Gentleman therefore I am resolved to content myself with a little and shall avoid even the name of a West Indian.'

The prosperity of Pinney's plantations had been due largely to his management of slaves; he sold freedom to the old and weak, and bought children whose value would increase. His view was that 'surely God ordained 'em for the use and benefit of us', but he required that they be shown 'humanity tempered with justice' because 'they surely deserve it, being the very means of our support.' Although Pinney's partner, Tobin, was a leading campaigner against abolition, Pinney took a less dogmatic line; his guiding principal appears to have been the economic interest of the established estate owners.

When he moved to Bristol, Pinney brought two black attendants with him. Both Fanny Coker and Pero had been bought by Pinney in 1765. Fanny's father is thought to have been Pinney's plantation manager, which may be why she was manumitted, or freed, in 1778. She served as maid to Pinney's wife Jane until her death in 1820. Pero, who was twelve when Pinney bought him, along with his two sisters, became Pinney's valued manservant. Although he was given responsibilities beyond that role, and in Bristol engaged in money-lending on his account, he seems never to have been manumitted, so was probably still a slave when he died in 1798. A letter from John Pinney written shortly before his death informs us that he was 'at Ashton for a change of air... One or other of us visits him three or four times a week. He has waited upon my person upwards of thirty-two years, and I cannot help feeling much for him, notwithstanding he has not lately conducted himself as well as I could have wished.' In 1999 a new footbridge at Bristol's Harbourside was named 'Pero's Bridge' in recognition of those enslaved for the profit of the city's merchant and planter community.

On Pinney's death in 1818 the house in Great George Street passed to his younger son Charles, who also took over the business. The house remained in the family until 1861, although for much of the nineteenth century it was occupied by tenants. In 1938 it was given to the city of Bristol by Canon R. T. Cole, and was opened shortly afterwards as a museum, particularly intended to display furniture and art of the eighteenth century in a Georgian domestic setting. The content of the museum has always been particularly associated with John Pinney; the Pinney family first made a loan to the house in 1939, and today a number of items belonging to the family are on display.

REASONS FOR DESIGNATION
The Georgian House is designated at Grade II* for the following principal reasons:
* Fine example of a substantial merchant's town house in Bristol, of particular interest for having remarkably well-preserved interiors, with some original fittings
* Complete range of service rooms in basement, and stone-lined plunge pool
* Strong connection with John Pinney, plantation owner and sugar merchant, and his former slaves, Pero, and Fanny Coker, adds to historical interest of building. This amendment is written in 2007, the bicentenary year of the 1807 Abolition Act.
* Group value with other individual houses of similar type, built at the same time by Thomas Paty