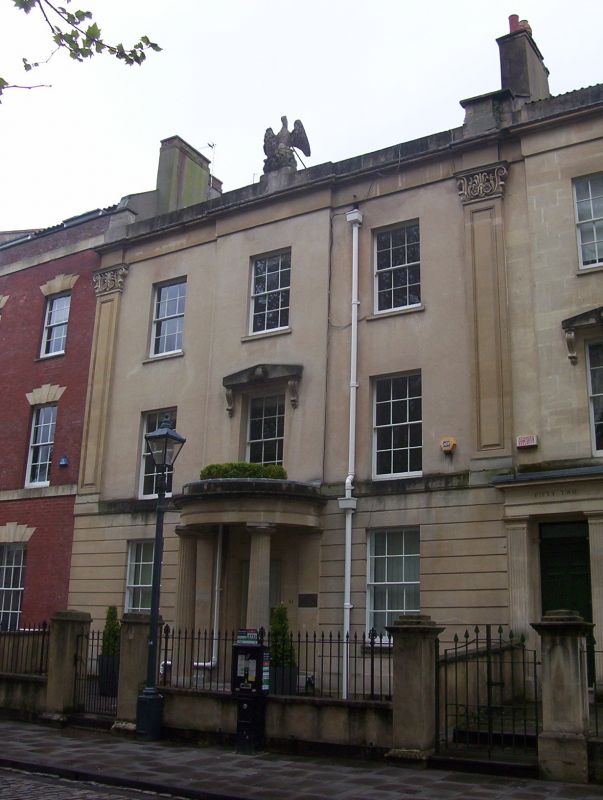 Attached house. c1833. Perhaps by Henry Rumley. Limestone
ashlar, party wall stacks and pantile roof. Double-depth plan.
Neoclassical style.
3 storeys, basement and attic; 3-window range. A symmetrical
front has a banded ground floor, first-floor panelled
pilasters with anthemion capitals to frieze, cornice and
parapet. The centre breaks forward with a bowed open portico
on Roman Doric columns to an entablature, chamfered door
surround to a 6-panel door, and PHOENIX HOUSE inscribed on a
panel above. Pedimented lintels with acroteria and wreaths to
the middle first-floor window, to 6/6-pane sashes. A large
carved Phoenix to the centre of the parapet.
INTERIOR: central hall with an elliptical arch to a lateral
open dogleg stair with turned balusters, wreathed and ramped
rail with a star inlaid in the wreath; good marble fireplaces
to ground and first-floor rooms, basement range fire surround;
cornices with anthemia and guilloche; 6-panel doors and
panelled shutters.
SUBSIDIARY FEATURES: attached front area railings with
anthemia finials, and piers.
Queen Square was built between 1701 and 1727. Much of the W
side was rebuilt after the Reform Bill riot of 1831.
(Gomme A, Jenner M and Little B: Bristol, An Architectural
History: Bristol: 1979-: 228; Ison W: The Georgian Buildings
of Bristol: Bath: 1952-: 140).