Numbers 20, 22 and 24 and Attached Walls, Piers and Railings 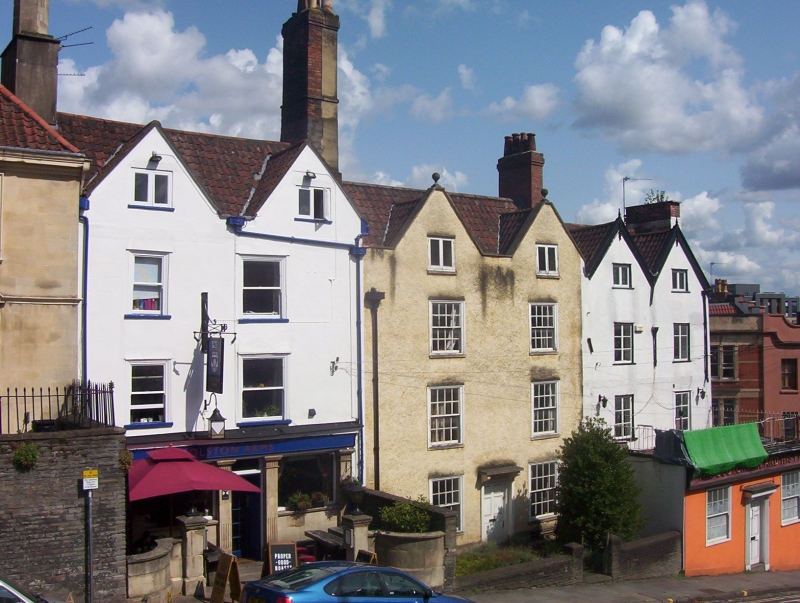 Entry Name: Numbers 20, 22 and 24 and Attached Walls, Piers and Railings

Terrace of 3 houses. Dated 1695 in deeds, C18 windows, mid C19 public house fronts. For Edward Colston. Render over white lias rubble, brick party wall stacks and pantile gabled roof Single-depth plan, with 2-bay outer ranges (20 and 24) flanking wider, probably 3-bay, No 22; C19 and C20 rear service extensions. Each of 3 storeys and attic; 2-window range. Each has 2 stone-coped gables, below the ridge, with barge-boards, and a parapet and replacement (replica) ball finials to No.22. Central doorway to No.22 with a stone bracketed canopy and a low C19 6-panel door. N 0.20 has an ashlar public house front with fluted jambs to left-hand and central doorways, and plate-glass windows, N 0.24 has a projecting ground floor over the front garden with a central doorway and flanking homed sashes. Upper windows are 8/8-pane sashes (1970s replacements) in exposed frames to No.22, plate-glass to No.20, and C20 casements to No.24; C20 attic casements. Tall gable stacks. The rear elevations of Nos 22 & 24 are symmetrical with paired gables to raking roofs, and No.20 has a pair of small gables. 3-storey stair towers to Nos 22 & 24 with raking roofs and small2-light casements, and some stone slate drips over windows; No 22 has wood-mullioned windows. No.24 has ground-floor ovolo-moulded cross windows, and a similar door frame with bar steps.
INTERIOR: No.20 largely altered C20. No.22 has many original details including an internal timber frame with post to rear left of passage carrying chamfered beams (originally cased in plaster); front door opens into a through passage to a fine late C17 16-panel rear door with chamfered frame with bar steps, a winder dogleg stair with elm treads, uncut string, square jewels with turned finials, and splat balusters; room to ground-floor left has early C 18 panelled cupboard set in moulded wood architrave to left of open fireplace with replacement lintel. Wide elm floorboards; C19 cast-iron fireplaces in upper rooms with plain stone surrounds. Doors date from C17 to C19. Late C17 doors are two-panelled, that to cellar set in C19 beaded architrave and 2 bolection-moulded doors to first floor; cyma mouldings to architraves in first-floor lobby, to stair window and to doors. Second floor has 3 beaded architraves on heavy pegged frames in lobby; room to left has probably late C17 cyma-moulded surround to early C19 cast-iron grate, and room to right has similar fireplace surround. Roof renewed 1968. No.24 altered including loss of lower rear stair. Rooms beneath Colston's Ahnshouses (qv) extend back to Horfield Road. SUBSIDIAR y FEATURES: attached wrought-iron railings to front area of No.22, and ashlar quadrant walls and piers to front area of N 0.20. HISTORICAL NOTE: built for Edward Colston to provide revenue for his almshouses next door, beneath which No.24 extends because of the rising ground. Described as "lately built" in 1695, each had a 12-foot deep front yard to the hill. Illustrated by Samuel Jackson mid 1820s. The 2 public houses are shown on a map of1888. Part of a good group with Colston's Ahnshouses (qv).