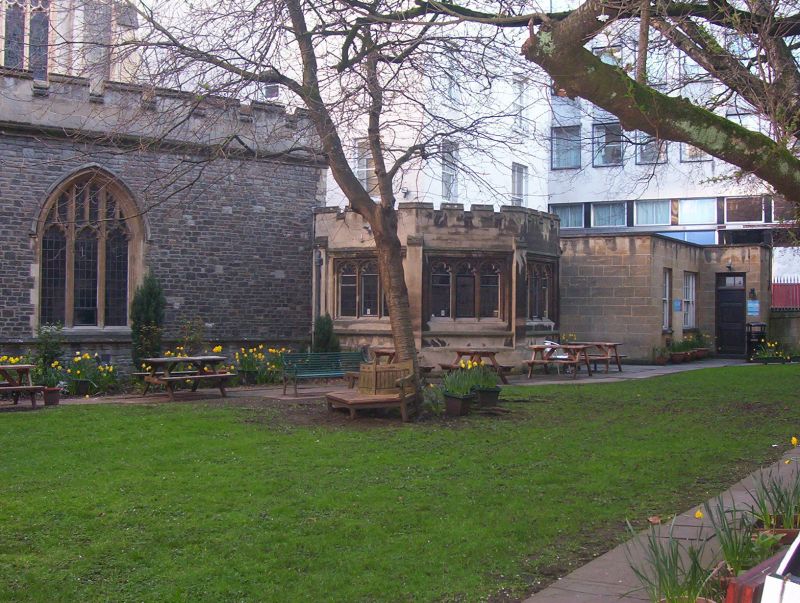 Church. C14, rebuilt c1470, clerestory repaired after a storm
in 1703, aisle and E windows restored 1873. Bath stone ashlar
and Pennant rubble S aisle.
PLAN: aisled, clerestoreyed nave and chancel, SW tower, S
porch and SE vestry. Perpendicular Gothic with a Somerset-type
tower.
EXTERIOR: tall 5-light transomed E window, and a S buttress
forming an octagonal chimney. 5-bay N aisle of 3-light windows
above a sill drip mould, with a crenellated parapet;
clerestorey of 4-light Tudor-arched windows separated by thin
buttresses which run up through a drip mould into a
crenellated parapet; porch with a Tudor arch hung with open
cusps, and splayed reveals with hollow mouldings and Tudor
roses; ogee hood with crockets growing larger to the finial,
with blind tracery in the spandrel; angle buttresses with
crocketed pinacles, blind tracery panels beneath a drip mould
and parallel gable. Inside, the porch has a fan vault with
pendants, and the church door has casement reveals set with
foliage in the arch, and a cranked hood. C19 SE crenellated
octagonal vestry with 3-light mullion windows with cinquefoil
heads and sill bands between buttresses; similar fenestration
to N aisle not visible.
Large W nave window has a flat Tudor arch and 6-light
transomed lights. 4-stage tower divided by deep drip moulds,
with weathered plinths between setback buttresses, diminishing
upwards to slender shafts: NW octagonal stair tower, the top 3
stages having blind panelling with cinquefoil heads;
ground-floor 4-light W window with a hood and raked stops; the
remaining windows are blind, paired lancet cross windows with
ogee hoods with crockets and finials, and blind, tripartite
belfry windows with ornate panels and louvres to the upper
halves; a deep dripmould with gargoyle beasts and an open
traceried castellated parapet, open square turrets with thin
buttresses bearing on gargoyle corbels and a similar octagonal
spirelet to the stair turret.
INTERIOR: panelled reredos by Hansom, with defaced angels
above. 7-bay nave, columns with 4 attached shafts to painted
angel capitals holding scrolls, and similar corbels to the
shallow roof; the chancel not structurally differentiated but
the two E bays have raised floor; door in N aisle to a rood
loft stair; lower N aisle wall with wall tombs is C14. Base of
tower has tall narrow arches with attached shafts and bell
capitals, bearing on angel corbels, with vestigial fan vaults.
C15 arch-braced tie beam roof with gilded bosses.
FITTINGS: wrought-iron gates and piers, early C18 by William
Edney, removed from the Church of St Nicholas after the Second
World War. An ornate large marble pulpit of 1890 by Harry Hems
of Exeter with canopied niches containing statues, ramped
steps and wrought-iron handrail; panelled choir stalls with
poppy heads and pews with carved bench ends of 1886;
wrought-iron sword rest by William or Simon Edney, early C18,
with considerable foliage; ornate font of 1882, a square base
with marble shafts rising to an octagonal basin with trefoil
panels. Wrought-iron gates with piers, early C17, by William
Edney.
MEMORIALS: Royal Arms of Charles II over S door. N aisle: 3
ogee-arched chest tombs, to the W that to Edmund Blanket
d.1371, a crocketed ogee arch with open cusps, containing
recumbent figures of a man and wife praying, and trefoil
panels with figures to the chest beneath. It was transferred
from the previous church on this site. Dresser tomb to Martin
Pringe d.1626, an oval tablet with allegorical figures on the
corners in an aedicule with Corinthian pilasters to a broken
segmental pediment bearing a cartouche and 2 recumbent
statues; a painted apron with hourglass, tools and merman and
mermaid bearing the plaque.
S aisle: marble wall tablet to David Peloquin d.1766, a
sarcophagus with small side urns and a large one in the
centre, with an obelisk with drapes behind and an apron with
winged cherubs beneath. Dresser tomb to Sir George Snygge
d.1617, a panelled plinth with 3/4 Corinthian columns bearing
a dentil cornice, with obelisks either side and a heraldic
panel above; inside is an arch with roundels and strapwork and
plaster figures, and an alabaster recumbent figure resting on
his elbow. Wall tablet to Robert Kitchin d.1594, a rectangular
painted frame with fleurs-de-lys at the corners and a kneeling
couple inscribed on a brass plate. Various late C18 and C19
marble wall tablets.
SUBSIDIARY FEATURES: attached to the W of the stair tower is a
crenellated wall and elliptical-arched gateway, flanked by
buttresses.
HISTORICAL NOTE: the parish church of Bristol; the tower and E
window were paid for by John Shipward, Mayor of Bristol in the
1480s. It originally stood beside the quays by the River
Frome, excavated mid C13.
(Gomme A, Jenner M and Little B: Bristol, An Architectural
History: Bristol: 1979-: 29, 62, 121; The Buildings of
England: Pevsner N: North Somerset and Bristol: London: 1958-:
408; Bristol City Parish Church: Bristol: 1977-).