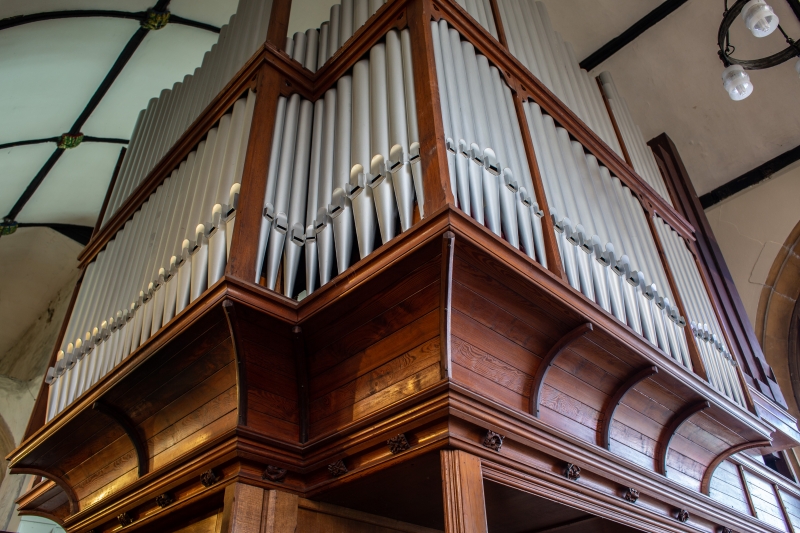 Vicarage. Dated 1889 on rainwater head. Incorporates a re-used
C15 framed oak ceiling. Built for the Rev. Richard Martin.
MATERIALS: squared rubble, hung slates to second storey,
dressed stone details. Hipped slate roof with coved eaves, 4
tall brick slab stacks with decorative bands, and later
4-light dormer.
EXTERIOR: 2 storeys and attic. 6 windows.
Main block with lower service wing to right. Arched entrance
doorway with fanlight to left on main front; above doorway a
lean-to hood supported by a pair of re-used early C18 painted
wood console brackets with carved acanthus scrolls. Ground
floor sashes in chamfered dressed stone drames. On 1st floor,
2 transom and mullion windows (one to light stairwell),
otherwise sashes. On the garden front, 2 large, single-height,
framed bay windows.
INTERIOR: Ground-floor room in SE corner of main block has C15
ceiling with richly moulded cross beams and cornice beams (3 x
2 bays); 8 moulded joists to each bay. At the intersections of
the beams are large, finely carved bosses, each with an
armorial shield backed by leaves and vines. At the cornice
beam junctions most of the bosses have been halved suggesting
that the existing ceiling was part of a larger original. The
various arms on the bosses have not been identified.
To either side of the chimney breast (above doorway and shelf
recess) is a timber 4-centred arch in which the carved
spandrels are possibly C16. HISTORY: this C19 vicarage was
built to replace an earlier house to the east, possibly late
medieval. Listed for the special interest of the C15 ceiling.