The Rummer, with attached cellar steps, railings and gate 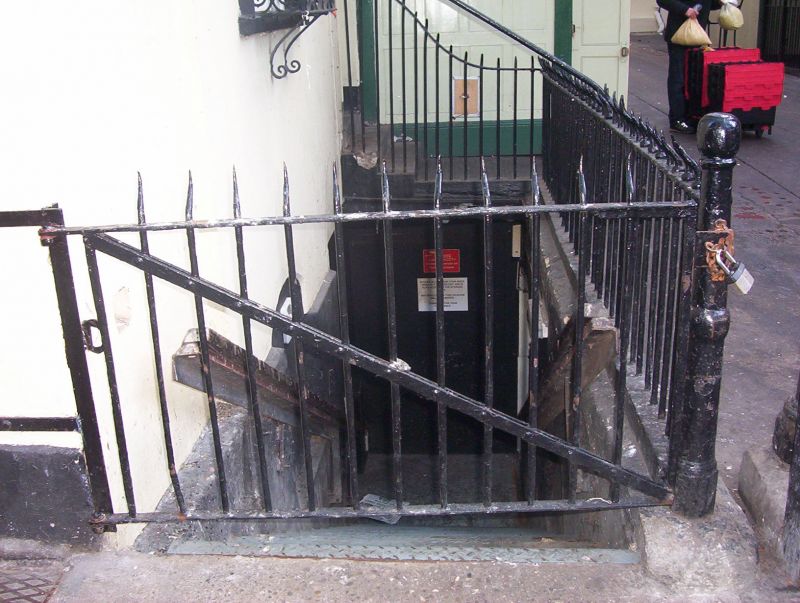 A public house and former hotel, 1740-1741 by John Wood the Elder, incorporating the western ends of earlier dwellings at 39 and 40 High Street.

A public house and former hotel, 1740-1741 by John Wood the Elder, incorporating the western ends of earlier dwellings at 39 and 40 High Street.

PLAN: the building stands on the corner of All Saints Lane and the glass arcade of St Nicholas’s Market, facing west and south.

It has an irregular, roughly L-shaped footprint, and is two storeys with an attic and basement. The main range is orientated north-south, and abuts what were originally the western ends of 39-40 High Street, now subsumed into the public house.

EXTERIOR: the main range of the building is two storeys with an attic and basement; the east wing is two storeys with a basement. On the south elevation the symmetrical composition remains evident on the upper floor, which has three windows and a pediment above. Alterations on the ground floor have left a single window on the left, and a recessed doorway with a plate glass overlight. Windows are one-over-one sashes within moulded stone architraves. There is a flight of steps to the basement, with irons railings and a gate around the well

The west elevation is also symmetrical, with five bays, the central three of which project slightly forward. There is a central doorway with a moulded timber architrave with fluted consoles and a pediment. It contains a pair of double doors with two fielded panels. The treatment of the windows varies, and may correspond with the C19 redevelopment. Some are within plain stone surrounds; others are in timber frames or plain openings. Windows on the ground floor are one-over-one sashes, and on the first floor six-over-six. The north-west corner of the building is canted and has a C19 door with decorative scroll corbels supporting a plain stone lintel. A wide, multiple-light window, with consoles and a moulded lintel, also dating from the C19, stands in the elevation to the right.

INTERIOR: the interiors have undergone alteration and reconfiguration. The main range of the ground floor is largely open plan, retaining an elliptical arched opening with fluted pilasters. The stair survives in its original position to the east; this is an open well with a closed string, with turned balusters, and a moulded, ramped rail, stylistically typical of the early C18. There is a panelled dado with large fields under a heavy moulding; this continues to the second floor. Some panelled window shutters survive, and there is a fluted surround to the C19 north-west doorway and window. Within the rear wing of the ground floor, formerly part of 39 and 40 High Street, the historic party wall between the two houses survives, though has an inserted doorway. There is a large limestone chimneypiece with mouldings including a Tudor rose, which suggests a date of between 1560 and 1603.

On the first floor of the main range the cornices appear to date from the late C19, and most joinery from the C20. There is some repositioned C17 panelling on the east wall. In the east wing, the historic partitions survive more completely, notwithstanding an opening which has been inserted through a former stud wall, revealing a substantial reused timber. On the northern wall there is a C16 chimneypiece: limestone with an arched opening with spandrel mouldings. C16 oak linenfold panelling lines two of the walls; on the southern wall it is approximately two-thirds complete. Elsewhere, mismatched alignments and differences in detailing suggests it has been assembled from at least two other rooms.

The second floor has also been reconfigured, but retains some historic features: there is a small fireplace dating from the original construction; this has a simple limestone chimneypiece with a cast iron gate. In the room now used as a kitchen there is a built-in, two- panelled cupboard. Within the room leading to the terrace is a reused C17, five-panelled oak door.

The basement to the main range is an arched, vaulted construction in rubble stone, now painted.

SUBSIDIARY FEATURES: on the southern elevation is a flight of steps down to the cellar, with wrought iron-railings and a gate.

The Rummer stands at the heart of the historic core of Bristol, within an area which has been an important commercial centre since the later medieval period. It is on All Saints Lane, believed to have been the rear access lane to burgage plots facing on to the High Street, to the east. The current building replaced a medieval hostelry on the opposite corner, now occupied by the Market Exchange, which was rebuilt in the 1740s by John Wood the Elder, also the architect of the Rummer.

John Wood, 1704-1754, was born in Bath. The son of a builder, he set himself up in the business in London, becoming the principal builder on the Cavendish-Harley Estate. He began working for Lord Chandos in Bath in 1727, and his ambitious aspirations for his home town materialised over the following decades. It is for this extensive formal redevelopment of the city for which he is most renowned. Wood undertook commissions elsewhere, too, and his design for Bristol’s Market Exchange is an accomplished example of English Palladianism. The Rummer was his only other Bristol building. It has also been known as the New Inn and the Market Tavern.

The premises now incorporates Wood's 1740s main range, and the rear sections of the medieval buildings at 39 and 40 High Street. There has been speculation as to whether the main range was built on earlier cellars, but their alignment with the upper rooms suggests they were likely to have been part of the same construction. 39 and 40 High Street were originally dwellings, and were largely demolished and rebuilt in the 1930s; the cellars and ground and first floors of the western ends of the buildings were retained, and access to the main range of the Rummer was created at basement and ground-floor levels. In 39 there is ceiling beam of C16 or C17 character, and in 40 are C16-C17 fireplaces, and re-sited C16 linenfold panelling. The floors above the first have been removed.

The Rummer was partially refronted in the C19, and the north-west corner entrance and shop window date from this period. The interiors of the main range of the building, particularly on the ground and first floors, have been reconfigured to form open-plan spaces. The stair was originally lit by a light well on the east; this has been converted to form additional accommodation.

* dating from the mid-C18, the building forms a handsome corner-piece within the market, includes a good-quality C19 shop front, and survives well;
* the interior retains its substantial stair, and has a number of impressive features reused from earlier buildings, including a Tudor fireplace and linen-fold panelling.

* designed by John Wood the Elder, an accomplished architect best known for his extensive redevelopment of Bath.

* with Wood’s Grade I-listed Market Exchange, adjacent, and with the many other listed buildings in this historic commercial core of Bristol.