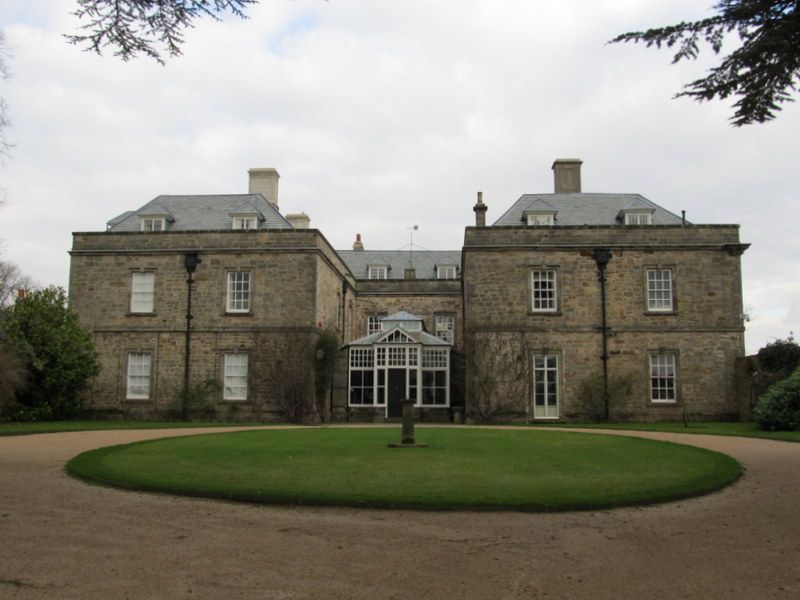 SK 38/3925 PARISH OF MELBOURNE CHURCH CLOSE
6/58 (East Side)
2.9.52 Melbourne Hall
GV II*
Country house. C16, c1630, altered between 1720 and 1727 with
most alterations carried out between 1725 and 1726 and designed
by Francis Smith of Warwick, east or garden front designed by
William Smith in 1744, also with minor later alterations and
some early C20 additions. Ashlar garden front and rubble stone
with flush quoins to other elevations. Hipped graduated
Westmorland slate roof with lead flashing and large rendered
ridge stacks, also external stone stack to north elevation. Two
storeys plus attics and half H-plan with seven bay garden
elevation and six bay south elevation. Entrance front to south
has a deeply recessed centre part, plain first floor band and
plain parapets above a moulded cornice. Western bays have two
glazing bar sashes in early C18 surrounds with raised fillet to
the edge and a raised keystone, and eastern bays have similar
window to east and C20 double glazed doors in similar surround
to west. Recessed part to centre has been rendered and mostly
glazed in with a conservatory in early C20. To either side
there are three moulded doorcases with pulvinated friezes,
raised corniced keystones and moulded cornices and to centre
there is a Gibbs surround doorcase with pulvinated frieze and
triangular pediment with central circle, flanked by glazing bar
sashes, similar to those to western bays. Above there are ten
similar sashes to those below, two to each of the advanced side
bays, two to centre bay with two more to each side. Between the
windows on the advanced bays and to either side of the well
there are fine early C18 hopper heads decorated with the Coke
achievement. Above again there are six hipped roof dormers with
small paned casements. Garden front has a plain first floor
band, moulded bracketed stone cornice with plain parapets above
and three centre bays advanced. Central Gibbs surround doorcase
with pulvinated frieze and triangular pediment has C20 double
glazed doors and a divided overlight. To either side there are
three glazing bar sashes in Gibbs surrounds. Above there are
seven more sashes in moulded shouldered surrounds on moulded
consoles with raised keyblocks. Three central bays have a
moulded pediment with central cartouche flanked by swags. West
elevation is L-plan, with cross timber casement windows in
raised plain surrounds plus raised keyblocks, to ground and
first floor. Plain eaves band over with plain parapets and
hipped roof dormers. On north face of advanced western bay
there is a moulded early C18 doorcase with bracketed stone hood,
and panelled door below a divided overlight. North elevation is
irregular with C19 and C20 additions to ground floor on west
side and early C17 mullion and transomed windows with dripmoulds
to east. Interior has a wide early C18 open well staircase with
three knopped balusters per tread, that to centre twisted, the
others plain, scrolled cheekpieces and panelling to dado height
on the opposite wall, plus a plasterwork ceiling above. The
hall also has a coloured marble bolection moulded fireplace and
moulded cornicing. South room has early C18 panelling with
corniced doorcases and contemporary carved marble fireplace.
Similar panelling to northern room and other ground floor rooms.
Dining room has re-set late C16 or early C17 panelling with
fluted frieze to top and a C18 marble fireplace with oak
overmantle carved with a central achievement set in strapwork
surround and fluted pilasters to sides. The date 1596 has been
painted on. Upper rooms have original C18 panelled doors and
some C18 fireplaces. West wing has one coloured marble
bolection moulded fireplace and a stone spiral staircase. The
house was originally a rectory which was converted into a
private house in 1630 by Sir John Coke, Secretary of State to
Charles I, and altered by Thomas Coke, Vice Chamberlain to Queen
Anne and George I, in early C18. It has also been the home of
Lord Melbourne, the first Prime Minister to Queen Victoria
(1837-1841) and his wife Lady Caroline Lamb, the authoress.
Richard Baxter (1615-1691) began his 'Saints Everlasting Rest'
here. Sources see J J Briggs 'History of Melbourne' 1852,
Historic Manuscripts Commission, Papers at Melbourne Hall.