Numbers 2, 4 and 4a and Garden Wall Attached to 4a 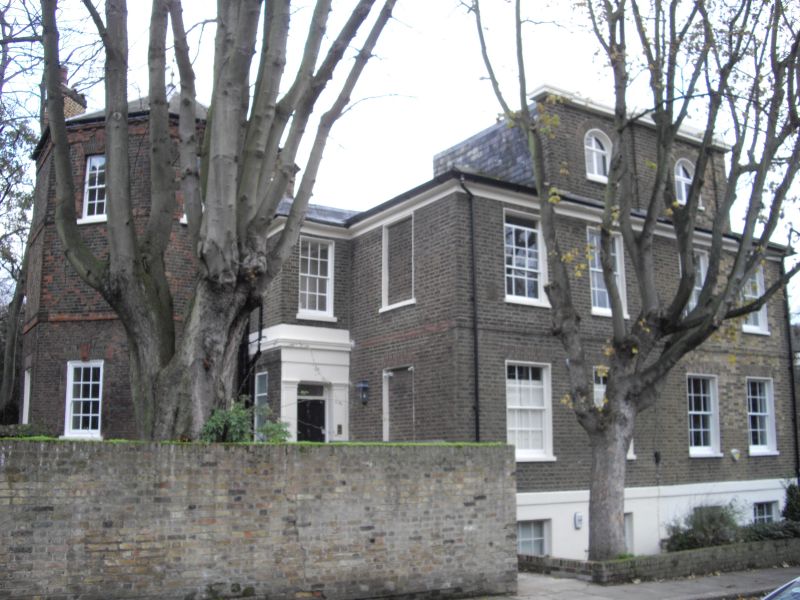 Entry Name: Numbers 2, 4 and 4a and Garden Wall Attached to 4a

Pair of semi-detached houses. c.1850, and developed, and
probably designed, by James Wagstaffe; with former garden
house to Old Canonbury House, late C16, the upper part
rebuilt. Yellow brick set in Flemish bond, stucco and roof of
slate on the main block, red brick set in English bond to
basement and ground floor of former garden house, yellow brick
with red brick dressings to upper part of garden house. Three
storeys over basement, the principal front of each house two
bays wide with entrance wing set back to the side. Basement
stuccoed and scored as ashlar. Stucco band between basement
and ground floor. Ground- and first-floor windows flat-arched
with gauged brick heads and original sashes, brick band
between floors. Stucco band below enclosed eaves. Attic storey
has round-arched window to each house, the pair grouped in the
centre between brick pilaster strips with cornice and blocking
course. Steps up to side entrance flanked on no 4 by pilasters
with entablature, cornice and former blocking course, panelled
door and overlight; panelled door and overlight only on no 2,
which has a mansard roof to entrance wing. The entrance wing
of no 4 is of two storeys with flat-arched window with
original sash above entrance. Attached to entrance wing of no
4 is no 4A, the former garden house, three storeys over
basement, octagonal in plan. The ground floor brickwork
appears to be original apart from the window heads, that above
is later. Entrance under cambered arch in stuccoed basement;
ground-floor west and north-west windows have sashes with
moulded frames set slightly back from the wall and gauged
brick heads decoratively composed in red and yellow brick.
Cusped stone panel with rebus of Prior Bolton rest below sill
of west window. North window has recessed sashes. Brick band
between floors. First-floor walls blank, with lozenge patterns
and quoins in red brick against the yellow on the west,
north-west and north sides. Second-floor west and north-west
windows are recessed sashes with decorative gauged brick heads
as below, and there is one flat-arched sash-window on the
south-east face. Brick band below dentil cornice of projecting
bricks, octagonal pitched roof. Stack on north-east face.
Stretch of old garden wall running from no 4A towards no 6.
(Historians' file, English Heritage London Division).