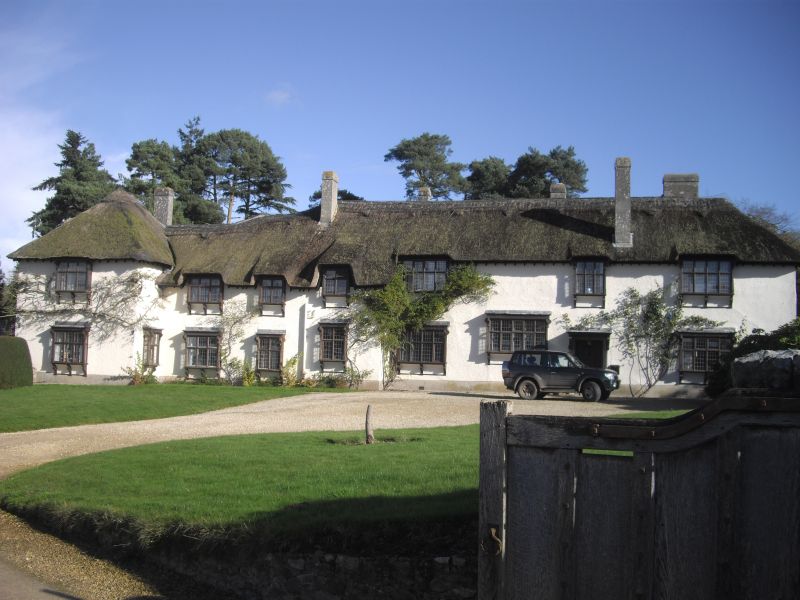 Large house. Probably C17 origins, thoroughly remodelled and enlarged for Mr. C.
Drewe Esq., the owner of the Broadhembury estate, at some date between 1903 and 1914,
the architect Harbottle Reed. Whitewashed and rendered, the front wall said to be
cob on stone rubble footings, the Edwardian enlargements probably stone; thatched
roof, hipped at right end and hipped at end of front left (north-west) wing; 2 axial
stacks, one internal front right lateral stack, 3 rear lateral stacks, all with
rendered shafts. Designed to harmonize with the traditional cob and thatch houses in
the estate village.
Plan: Sited within the village but slightly set back from the road. A long single
depth range, facing south-west with a front left (north-west) wing at right angles
and a rear right (south-east) wing at right angles; access corridor to the rear of
the main range. The core of the house is probably C17 and some of the stacks may
also be of this date. There is little other visible evidence of the pre-Edwardian
house: both the wings are by Harbottle Reed. The present entrance is to right of
centre into a large heated stair hall, with an Edwardian open well stair.
Exterior: 2 storeys. Long asymmetrical 7-bay south-west front, the left hand bay to
the wing at the left end. Good panelled front door to right of centre, dated 1614
with a porch hood on brackets. Complete set of Edwardian oriel widows of 2, 3 and 4
lights, the eaves thatch eyebrowed over the first floor windows. The oriels are
supported on carved Jacobean style brackets, each bracket decorated with a different
carved motif. The same style of window is continued round the house, some of the
rear first floor windows of the same date are flush to the wall.
Interior: The stair hall is lined with linenfold panelling, some is C16 and may have
been removed from the Drewe Arms (information from Mr. W. Drewe, the owner), the rest
is Edwardian. Fine Edwardian open well stair with turned balusters in a C17 manner.
The room to the left of the stair hall is lined with presumably re-sited C17
panelling and a Jacobean timber chimney-piece has (been re-used above the fireplace.
Edwardian decorated plaster ceiling in a C17 manner.
Harbottle Reed was the Exeter Diocesan Surveyor in the 1930s. He worked on a number
of churches and designed Rock House, Bridford parish, in an eclectic Vernacular
Revival style. The Drewe family have lived at Broadhembury House since 1903.
Broadhembury is an interesting house, both for group value in a remarkably unspoiled
village but also as an example of Vernacular Revival undertaken by a local architect.