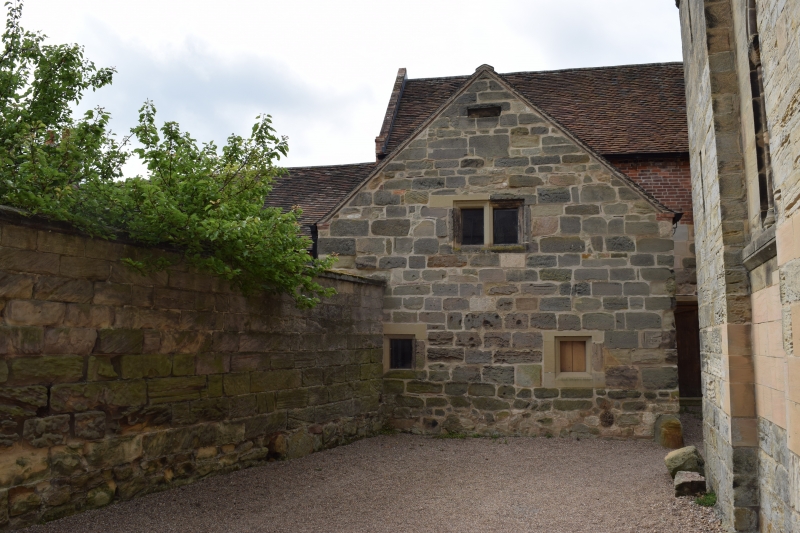 Threshing barn, now a store. C14 or C15 with a C17 and a late
C18 addition plus mid C19 alterations and additions. Massive
ashlar blocks with later rubble and red brick patching, also
with mid C19 red brick walling above the stone. Plain tile roof
with a mixture of red and blue tiles, plus brick coped gables
and dentilled eaves band. Single storey plus basement and
attic. Seven bays, plus lower single bay addition to east and
six bay addition to south. East elevation has a stepped corner
buttress to north, up to the full height of the ashlar and to
south end there is a gabled C17 addition with two recessed and
chamfered single light openings to ground floor and a 2-light
similar window above. Between, the barn has a deep chamfered
plinth which has a roughly central break, now filled in with
rubble stone, probably a former threshing door. To either side
there are two blocked narrow chamfered openings, just above the
plinth, and above there are four similar openings, also one
inserted opening to centre. Mid C19 brickwork above is blank.
West elevation has an irregular facade which has been
considerably rebuilt, with a four-centred arched doorcase into
the basement to north and a narrow chamfered opening above. To
south there are steps up to a first floor doorcase with re-used
chamfered stone for the jambs and a plank door. Beyond there is
an area of brick patching and a segment headed opening just
above the plinth to south. Beyond again there is a blocked
four-centred arched doorcase and a recessed and chamfered
opening. Over the northern door there is another plank door in
the C19 brickwork. Later part attached to south has two flat
headed openings and a plank door to south end. North gable wall
has a C19 segment headed doorcase, flanked by similar windows to
top of the gable in the C19 brickwork. Interior has large
chamfered floor joists and queen strut roof trusses. C17
addition has malt drying floor with punched tile floor over
brick groin vaults.