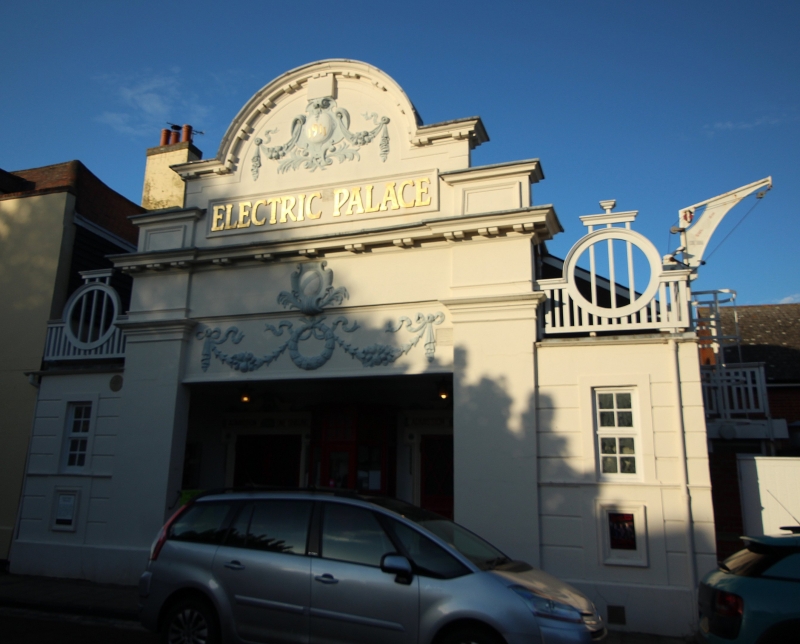 Cinema constructed in 1911 for Charles Thurston, the East Anglian travelling showman. Architect: Harold Ridley Hooper of Ipswich. Brick with Welsh slate gabled roof with three metal ridge-line ventilators. Front of Roman cement. Auditorium without balcony entered via small foyer.
EXTERIOR: The front has a raised centre part and low wings. Semi-circular central winged dentil pediment with convex circular date panel amid a cartouche of strapwork and drapery. There is a solid balustrade either side and a long horizontal panel with 'ELECTRIC PALACE' in serif letters. Below this is a cornicewith paired dentils. Wide recessed opening with flanking pilasters and a frieze with a moulded motif of fruiting swags, drops, ribbons and a central laurel wreath. The low wings have rusticated bands with, above plaster panels, small-pane double-hung sash windows. Above are painted timber balustrades with circular motifs of Mackmurdo-like character.
INTERIOR: Centrally positioned inside the entrance porch is a five-sided kiosk and elaborate twin entrance doors with eared architraves, pulvinated friezes and winged segmental pediments with shell motif. Auditorium with a plaster barrel fielded ceiling with ventilation roundels. Elaborate proscenium and side walls with plaster-framed panels over a dado. Twin exit doors flanking the proscenium. Shallow stage. Projection room over the entrance.
ANALYSIS: The Electric Palace is a rare survival from the early days of purpose-built cinemas following the introduction of the Cinematograph Act in 1910. It had a period of closure from 1956 to 1972 -when the cinema was 'rediscovered' and reopened by a charitable trust. Miraculously, it escaped demolition after closure in 1956 and the subsequent sixteen-year interregnum prevented drastic alterations.
SOURCE
Chris Strachan, Harwich Electric Palace, publisher: Chris Strachan, Harwich 1979.
David Atwell, Cathedrals of the Movies, The Architectural Press, London 1980, pages 27 -29 and 186.
Richard Gray, Cinemas in Britain, Lund Humphries, London, 1996, pages 23-24 and 134-5.