A Grade I Listed Building in Ingoldmells, Lincolnshire 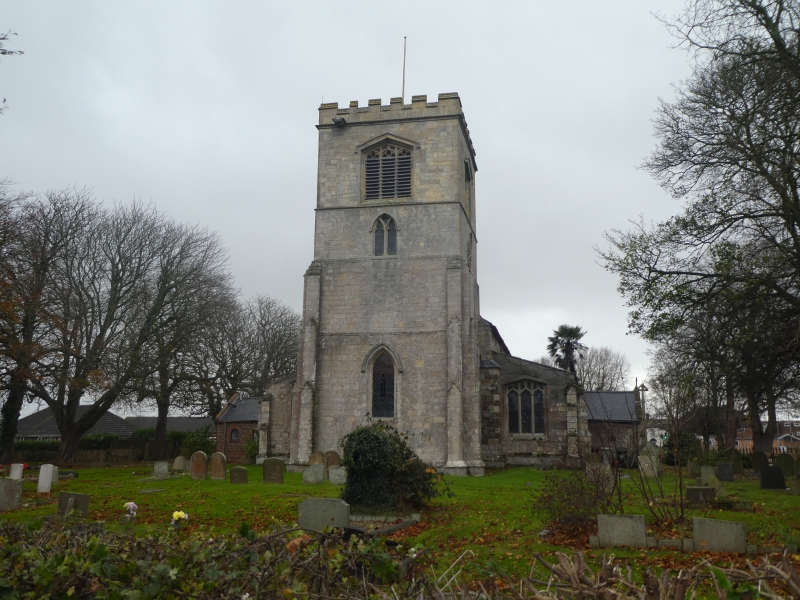 Parish church. c.1200, C13, C14, C15 chancel demolished 1706,
restored 1858, 1898. Ashlar and squared coursed limestone
rubble. Red brick. Slate and lead roofs. Western tower, nave
with clerestorey, aisles, south porch, vestry. 3 stage C14
tower with stepped angle buttresses, plain offsets and embattled
parapet. In the belfry stage are single broad 3 light windows,
cusped heads and concave chamfered surrounds, with below single 2
light Y traceried windows. The west window is pointed with
chamfered surround, hood and human head stops. The north aisle
has lead roof and C15 panel traceried window to east and west and
to the north are 4 two light C14 flowing traceried windows.
Brick gabled Cl9 vestry with pointed door and lights. The slate
nave roof has C13 clerestorey of 2 paired and single triplet of
cusped lights. The east wall of the nave has a blank semi-
circular arch in the blocking with "WA 1757" on the keystone. In
the east wall of the south aisle is a 3 light C13 intersecting
traceried window. The south side has 4 C14 windows matching
those to the north and the west window matches the north aisle
west window. The gabled C14 south porch has a double shafted
outer doorway with quatrefoils to the base and annular capitals,
the double moulded arch has an outer door of fleurons and hood
mould with lion stops. Side benches, quatrefoil side lights.
The inner doorway is continuously moulded with hood having human
head stops. C18 panelled door. To the right of the door is an
ogee head niche. Interior. 6 bay c.1200 nave arcades with round
shafts, spurred bases, stiff leaf capitals, double chamfered
arches. C14 tower arch with engaged triple shafts with foliate
capitals and triple chamfered arch. In the south aisle a cusped
ogee headed piscina and in the north aisle a similar niche.
Fittings. A full set of C15 benches with poppyhead ends and
panel traceried rear panels. The elaborate octagonal C15 font
has panelled stem and bowl containing fleurons in cusped panels
with beast head embellishments, Cl9 conical wooden cover with
freestyle carving and brattished rim. Monuments. At the east
end of the nave are 2 C15 ledger slabs, and in the north chapel a
small brass to William Palmer d.1520, depicting a cripple with
his crutch.