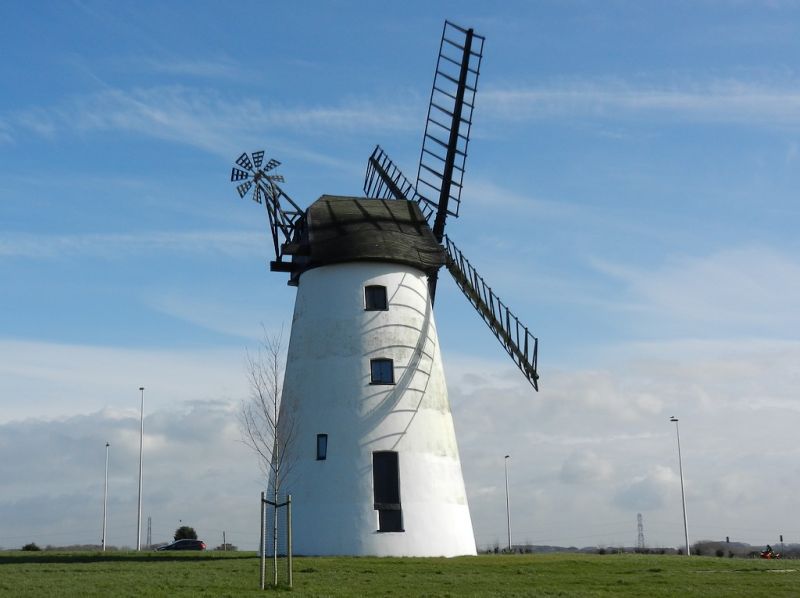 A former tower windmill of tapered design built in the 1830s for the Clifton Estate with repairs undertaken in the 1960s. Architect unknown.

MATERIALS: It is built of brick with white-painted external rendering and has a timber roof, sails and fantail.

PLAN: The building has three storeys with a basement and is circular in plan.

EXTERIOR: The present main entrance has modern double doors facing east at basement level. There are taking-in doors facing east and west on the first floor and modern timber-framed casement windows to all floors apart from the basement. A plaque commemorating the Allen Clarke Memorial Windmill is attached to the windmill's east side. The windows are arranged with three to the first and second floors and two to the third floor. The roof, constructed in 1986, is a clinker-built timber cap of traditional Fylde style, based on the style of an upturned boat. There are four dummy sails and a dummy fantail with eight small sails.

INTERIOR: The basement has a concrete floor with a 67 inch diameter millstone grit grinding stone laid flat as a centre piece. Brick walls have been inserted to create a room housing a toilet and a small kitchen. A plaque commemorating the Allen Clarke Memorial Windmill is attached to the inside of the windmill's outer wall. Metal girders supported on a circular cinder column support the modern timber first floor. Floors and staircases throughout the windmill are modern replacements. The first floor retains one reused timber lintel, all others are modern replacements. The second floor contains original machinery including a yellow-painted 1830s-built cast iron great spur cog wheel constructed in two halves and bolted. The upper floor houses much original cast iron machinery including a blue-painted vertical shaft, a green-painted cogged wheel known as a wallower, and a red-painted wind shaft that carries the external sails. The wind shaft also drives a vertical wooden brake wheel which drives the wallower. The remainder of the machinery is concerned with turning the cap on the mill and consists of a series of gears, shafts, centering wheels and a cogged pinion running all the way around the top of the windmill's tower on a cogged kerb, in such a way as the cap turns to bring the sails into the wind.

Little Marton windmill was constructed in 1838 and is a rebuild of an earlier tower mill which stood on the same site of an even earlier post mill. The millwright was Richard Blezard, of Preston, and his account book details the fitting out of the mill from January 1838 to December 1838, and is made out for a Mrs Whalley. The mill was owned by the Clifton Estate and leased by Nancy Whalley and her son John. A new drying kiln was also erected, and in 1841 John Whalley was the miller. In 1922 the Bagot family bought the mill and Cornelius Bagot became the miller. Milling ceased here in 1928. When local author, poet, historian and dialect writer Charles Allen Clarke (1863-1935) died, his friend Cornelius Bagot gave Little Marton windmill to the Allen Clarke Memorial Fund (The Speedwell Fellowship) to be kept as a monument to Allen Clarke. A plaque commemorating this gesture was placed on the outside of the mill. In 1953 the tenants of the mill were the Shepherd family who manufactured poultry appliances. Two years later Blackpool Corporation took on ownership of the windmill and it became the headquarters for the 53rd Blackpool Scout Group (St Wilfred's). Repairs to the windmill undertaken in 1968 included a new roof and sails and a dummy fantail. The drying kiln was demolished at an unknown date. In the latter half of the C20 the exterior of the building was rendered and painted white. In the mid-1980s recycled timber piles taken from Preston Dock were used to support the windmill's original great spur wheel on the second floor. At the same time the windmill's roof was rebuilt to a different shape and the internal machinery was rebuilt reusing original cast iron equipment wherever possible. Little Marton windmill was listed at Grade II on 20 October 1983.

Little Marton Windmill is designated at Grade II for the following principal reasons:
* Degree of intactness: it retains considerable elements of its early machinery, much of which dates to the original installation, and as such it survives as a good exemplar of how C19 windmills functioned
* Regional distinctiveness: it is a good example of a 'Fylde' type of tower windmill dating to the first half of the C19
* Architectural interest: it is an exceptionally complete example of a tower windmill in a national context, and represents a highly significant specialist industrial building type, once nationally widespread
* Historic interest: the windmill is a memorial to the author, poet, historian and dialect writer Allen Clarke.