A Grade I Listed Building in Talbot, Blackpool 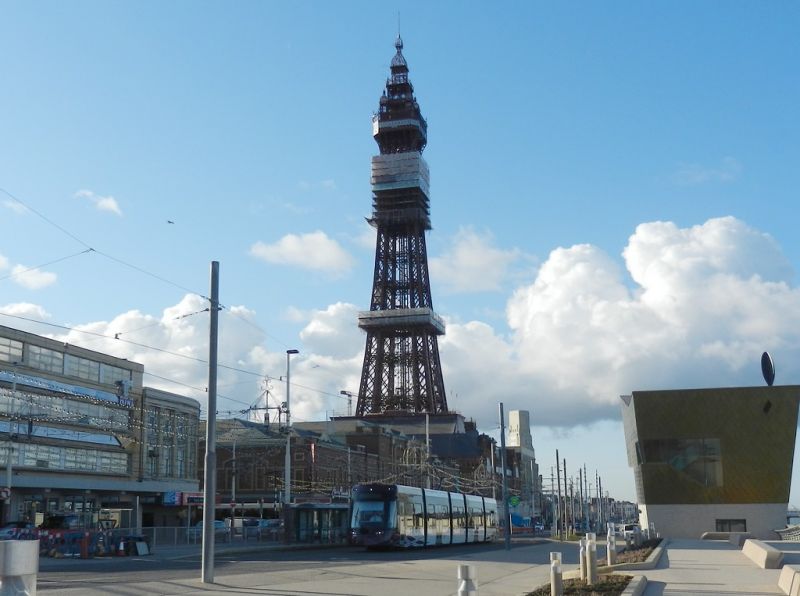 (formerly listed as The Tower, including the Ballroom)

Tower of open steel girders. Square plan; four concrete foundation blocks 35 feet square and 12 feet thick with rolled steel joists and steel bedplates support four square-braced stanchions, each consisting of four pillars braced together with lattice girders, tapering in the height from 100 feet width at base to 30 feet width under main gallery, which is enclosed in glass, with three open galleries above. Ogee shaped cap, topped with flagmast terminating 518 feet above ground.

Circus: Arena, 1891-4 by Maxwell and Tuke, originally in Chinese style, remodelled 1900 (probably by Frank Matcham) in Islamic style. Square plan between feet of Tower, rising from basement level to include innermost stanchion of each leg and the inner of each pair of arched braces between stanchions. These structural elements are incorporated into comprehensively Moorish-Islamic design. Arches have soffits cusped in vigorously rhythmic sequence of multifoil arches, with matching but subdued patterns in relief on the sides; pendentives filled with five-sided and inverted-pyramidal structure of composite design, with cusp-profiled horse-shoe opening above. Base of stanchions boxed with marble slabs. Recessed straight-fronted balconies under arches at springer level, decorated with low relief pattern of interlacing arches; screened mezzanine balcony on north side, with seven fretted windows. Boxes incorporated with stanchions, square at south east corner, convex at north west, with scallop-shell and foliated moulding on front. Dado of promenade behind seating has glazed tiles with geometrical pattern. Other wall surfaces and ceiling decorated with calligraphic detail, interlaced arches, stylized scallops, fan patterns, etc. Reservoir under ring for aquatic displays.

There have been successive alterations to function and decoration of other parts of the interior of the Tower building, with fragments of earlier chinoiserie in top floor on west side; but massive staircase in red terracotta, rising from main entrance on west side, survives intact.