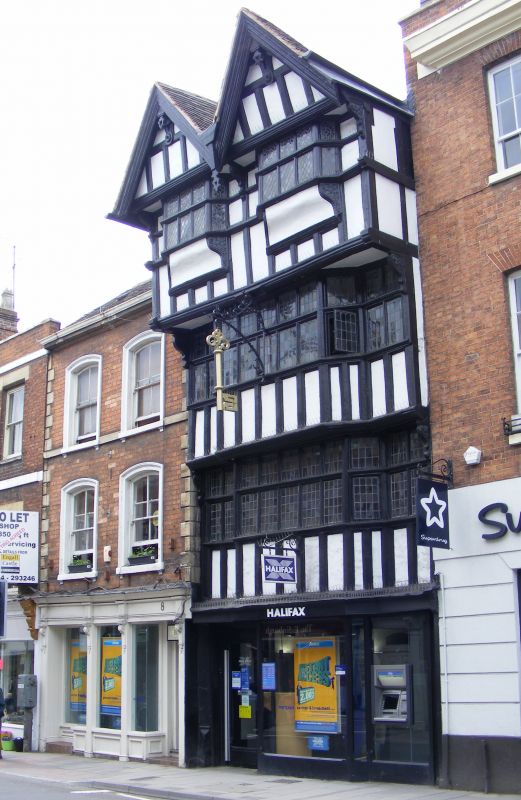 House in row. C16, remodelled and heightened 1610. Close-stud
timber-frame with plaster panels, tile roof, brick stacks.
PLAN: a twin-gabled right-angle plan frontage in 4 jettied
stages; the gables, which project substantially beyond the
normal street-line, also lean forward noticeably, probably as
a result of injudicious cutting of roof timbers at an early
stage. The street block rises to a cross-gabled top floor,
with the staircase and main stack to the right. Beyond this a
long and narrow full-height wing, with extensive fenestration
on either side, facing narrow side alleys.
EXTERIOR: 4 storeys, the jettied gables above 2 oriels in
1:3:1 lights with transom, on deep cyma-curve plastered
brackets contained at the canted ends by carved consoles. At
first and second floors is a continuous range of glazing in
2:1:5:1:2 lights including canted central oriel, all with a
transom, and each jettied. All windows have ovolo-mould
members, and are leaded. The stud framing has moulded edges,
and jetties are carried on decorative brackets at each level.
The gables have moulded barge-boards and pendants. The ground
floor is underbuilt with a C19 shop front, with a splayed
recess, left, with heavily moulded jamb brought to a bold
stop. Glazed C19 door, plain fascia under weathered hood. A
large golden key hangs from a wrought-iron bracket at second
floor.
INTERIOR: as a result of extensive and careful conservation
work much of the timber framework is exposed internally.
Behind the shop front is a large ovolo-mould transverse beam
carried on posts with jetty brackets, and with a central
cast-iron 'Batty Langley'-type quatrefoil cross-section
column.
A central well, carried on pairs of posts and chamfered beams,
with decorative splat baluster rail opens to the first-floor
gallery; beyond the well is a further transverse beam,
supported at its centre by a cast-iron barley-twist column,
fabricated at Coalbrookdale. The C17 lateral wide dogleg
staircase is open to the whole ground floor space, and has
splat balusters with a small moulded handrail, square newels
and ball finials; lighting the landing is a large 3-light
timber casement with transom.
The wing beyond has pairs of bold posts carrying chamfered
beams with braces, and pairs of replacement casements. At
first floor the galleried room has a 3-compartment ceiling,
the beams with plaster mouldings, plaster decoration including
mermaids, vine leaves and acorns, and a stone fire surround
with flat 4-centred head, and salt store, top left. The
second-floor front room also has a square moulded stone fire
surround. The top floor has 2 transverse beams with plaster
mouldings, and double fleur-de-lis plaster enrichment, also a
6-panel C17 door. The front roof is double cross-gabled.
The long narrow wing has a series of heavy posts with beams at
approx 2.5m centres, floors complete with early boards, and
paired casements in heavy framing each side. The upper two
floors are unused (Feb 1992) because of difficulties of
access. There are remains of wind-bracing in one bay of the
wing roof, and in 5 bays the original collared principals
remain.
HISTORICAL NOTE: VCH suggests that this was originally an
early C16 three-storied house, with 2-storied rear wing,
raised one storey in the C17. It was at one time the Old Coach
Office. One of the major coaching houses, The Swan (qv) is
immediately next door.
A remarkably fine and complete structure, with good quality
c1610 features (notably the plasterwork), which constitutes
one of the finest town houses of the period anywhere in the
country. Thomas Collins may also have been involved in late
C19 restorations.
(Victoria County History: Gloucestershire: London: 1968-: 130;
Ross K: The Book of Tewkesbury: London: 1986-: 120).