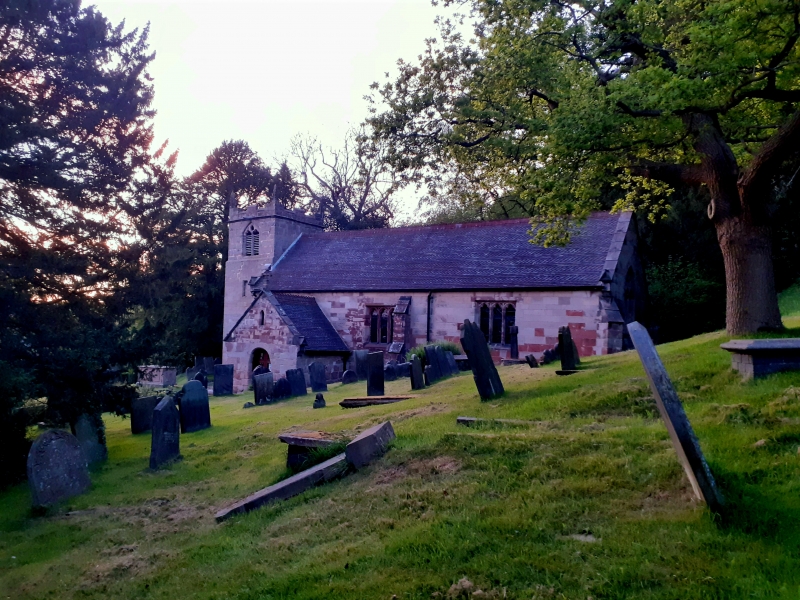 Parish church. Partly late C12/early C13 fabric, with C14 additions,
almost entirely re-built in C17 and thoroughly restored by Lewis and
Son of Newcastle-under-Lyme c.1870. Coursed sandstone to earlier parts,
ashlar to C19 work; late C19 plain tiled roofs with fishscale bands and
ornamental cresting. Nave and chancel in one, west tower, continuous
north aisle, south porch, organ chamber and vestry. Tower: probably
mid-to-late C17 (see date 1670 on south belfry window) in Gothic Survival
style. 2 stages on double-chamfered plinth; paired trefoil-headed
openings under triangular and heart-shaped lights to belfry on north,
south and west; west window in same style; below the belfry on south
a blocked, chamfered rectangular opening; plain embattled parapet and
corner pinnacles; wide stepped buttress at north-east angle. Nave: in
2 bays with chancel of one bay; fenestration all late C19; cusped
3-light windows under square heads to east of porch and a 4-light
mullioned and transomed window, also with cusped lights to west; East
window of 3 cusped lights with elongated quatrefoils above. Gabled
south porch: C17 with rather roughly-shaped round-headed outer arch and
lancet opening above; the south door itself is transitional (c.1200),
one order of shafts with an arch of one step and one slight chamfer, but
most of the stonework has been replaced (probably c.1870). North aisle,
organ chamber and vestry all under continuous catslide roof apparently
late C19 (plain mullioned windows on north side), but the C17 window of
2 round arches under a square head in the west wall (which seems to be
in situ) shows that the aisle must actually be a re-building (see also
datestone 1614/1878 above window). Interior: tall, narrow pointed
tower arch; north nave arcade of 2 pointed bays with a central octagonal
pier probably C14; continuous arch-braced roof to nave and chancel in
5½ bays (late C19); all the fittings and furnishings are also of late
C19 or later date except the late C12 font, a round basin with circular
moulded pedestal on chamfered octagonal plinth; C20 stained glass in
north aisle by Shrigley and Hunt. Monument: in arched recess on north
side of chancel; Sir John Bowyer (died 1604) and his wife, Catherine,
chest tomb with 2 recumbent effigies and armorial shields to sides,
moulded inscription band. B.O.E., Pp.200-1.