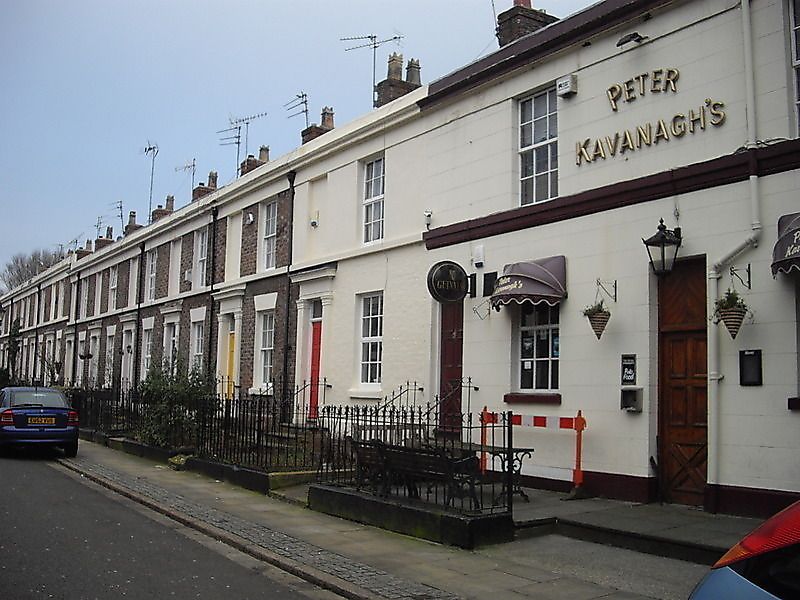 PLAN: the linear terrace is aligned roughly east-west and is adjoined at the western end by the public house known as Peter Kavanagh's, which is separately listed at Grade II.

EXTERIOR: the terrace is of two storeys plus basement, with a step up in height between numbers 18 and 20, and a shallow pitched roof with short brick chimneystacks (most of the chimneystacks on the roof's rear pitch have been removed). Each house is of two-bays and the terrace is raised slightly above ground level with a plinth, first-floor sill band, and a plain frieze to the top of the elevation with a cornice and blocking course above. The entrance doorways of each house are set to the ground-floor left up a few steps and consist of classical doorcases incorporating pilasters with a plain entablature above, and an overlight above the doors. Most of the houses have C20 12-panel doors, but numbers 10, 28 and 32 have six-panel doors, and number 20 has a four-panel door. To the ground-floor right of each house is a window with a wedge lintel and to the first floor above is another window that uses the plain frieze as a form of lintel band. To the first-floor left, above each entrance doorway, is a blind window. Numbers 8, 10, 20 and 32 retain six-over-six sash windows, but the remaining houses have replaced multipaned timber casements styled to look like sash windows. Each house has a partly visible basement window. Separating the houses and also running along the front of the terrace are cast-iron railings set upon a sandstone plinth. To the rear the houses have mainly casement windows, although a few sashes survive. Many of the houses have rendered rear elevations, with some pebble dashing, and have lost their original outshuts.

INTERIOR: the interiors of the houses were not inspected.

The terraced houses on both sides of Egerton Street were constructed in the early 1840s, but were originally twice as long and stretched further to the east. The eastern halves of the terraces, which comprised larger houses, were demolished in the mid-1970s in anticipation of a new ringroad scheme that was never built. Numbers 8-32 Egerton Street occupy the southern side of the street, along with the separately Grade II-listed Peter Kavanagh's pub at 2-6 Egerton Street.

8-32 Egerton Street, including cast-iron railings, is listed at Grade II for the following principal reasons:

* it is a good example of an early-1840s residential terrace constructed during Liverpool's residential building boom in a neighbourhood designed for wealthier tradespeople and professionals, and is representative of the burgeoning artisan class in the early-mid C19.

* it has strong group value with the adjoining Peter Kavanagh's public house at 2-6 Egerton Street, and the terrace on the north side of Egerton Street, both listed at Grade II.