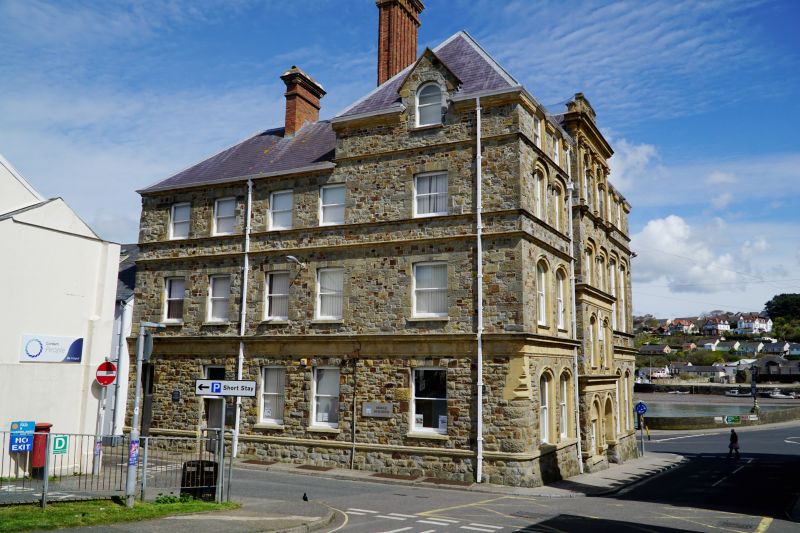 Council offices. 1882 by WR Bideford. Carving by H Hems of
Exeter. Squared local stone rubble (rough-faced in ground
storey with a marked batter below sill-level); details in Ham
stone. 4 tall red brick chimneys with tops designed as
entablatures, the 3 on the sides fronting Bridge Street and
The Quay with pilasters strips on the sides.
Plan approximately square with entrance-hall and staircase in
centre of Bridge Street side. Renaissance style.
3 lofty storeys on side facing The Quay, 4 storeys to Bridge
Street, 3 storeys to Allhalland Street. Main fronts to Bridge
Street and The Quay of 6-window range, the 2 middle windows
set in slight projections.
Front to The Quay has segmental-headed ground-storey windows
with moulded architraves and scroll-keystones. Continued
moulded sills; entablature above window-heads. Second-storey
windows flat-headed with rounded top corners, moulded
surrounds and hood-moulds with carved terminals. Below them,
panels of carved foliage and cartouches or, in the centre
projection, half-balusters. Outer window in third storey have
flat heads and moulded surrounds, being finished above
eaves-level with shaped pediments.
Round-arched windows in centre with moulded architraves and
keystones, these flanked and separated by pilasters with
carved capitals supporting an entablature and segmental
pediment; the latter is a replacement of the original
ogee-shaped gable with carved front and small segmental
pediment. Beneath the window a pair of stringcourses forming
an entablature.
Bridge Street front is similar but with less regularity, since
both the centre projection and the left side have 4 tiers of
windows compared with 3 on the right. The centre projection is
finished with a pedestal flanked by scroll-buttresses and
carved with a cartouche and swags. An old photograph shows the
pedestal, or its predecessor, surmounted by a segmental
pediment. The shaped pediments which formerly topped the outer
third-storey window have been removed. Between the
second-storey windows of the centre projection is a painted
sundial, described in the 1973 list as 'from earlier
building'; if so, it has been very thoroughly restored. Front
to Allhalland Street is plain, though with entablatures,
stringcourses and continued sills carried round.
INTERIOR: open-well stone staircase with iron balustrade,
scrolled at the foot. Plain square-section balusters with
S-scrolls fitted in between their tops. On the walls of the
compartment, 4 stone coats-of-arms, one inscribed LEWIS BUCK
ESQUR. MAYOR 1758. Rooms not inspected. Perkin's Almanack of
1883 (p16) describes this as Bridge Hall. 'Here are held the
School of Science and Art classes; the Free Library; North
Devon Permanent and Terminable Building Society, the Bridge
Feoffee Meetings, etc. etc.' The builder was R T Hookway of
Bideford. Plaque in entrance-hall says building 'was rebuilt
at the cost of the Bridge Estate... on the site of a Bridge
Hall rebuilt AD 1758 and of a Free School rebuilt AD 1657 and
repaired AD 1680 and 1780 and of a Grammar School founded AD
1689'.
(Granville R: History of Bideford: 1883-: P.103-5; Goaman A:
Old Bideford and District: 1978-: 42, 49).