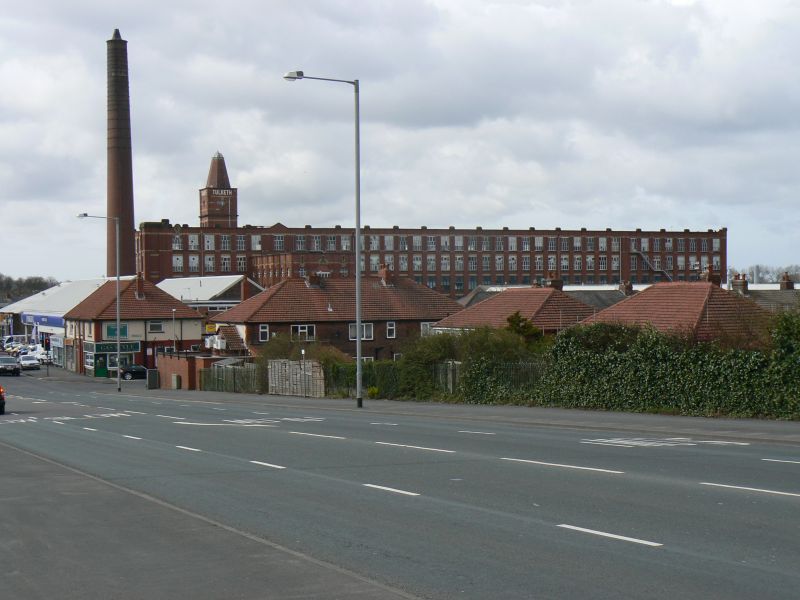 Cotton mill, now mail-order warehouse and offices. 1905. Cast-iron columns, steel beams, concrete floors, with cladding of red brick and some yellow brick, asphalt roof (currently under repair with composition coating). Very large rectangular plan on north-south axis, plus: staircase and sprinkler tower on west side, office block in angle south of this, stair-turret at north-west corner, extractor duct turret at south-east corner, and large engine house attached at right-angles to main range on the north side of this. Five storeys over basement, 4 x 12 bays, with pilasters between the bays (panelled at the top stage), and a parapet with upstands over the pilasters; large rectangular windows filling each bay on each floor, all with 11-pane glazing and 3-course yellow brick heads (those at the top floor linked in a continuous band). The tower (between the 6th and 9th bays from the south end), has a shallow 3-storey toilet block projected on the west side, with a ramped parapet, but is otherwise square, with pilastered corners, and rises 2 stages above the roof of the mill, with a cornice between the upper and lower of these, the upper having .3 yellow bands, a keyed oculus and large white brick lettering "TULKETH" in each side; and a squat octagonal spire clad with red tiles. The office block south of the tower, a rectangular flat-roofed single-storey range, has yellow bands, a cornice raised as a pediment over a round-headed doorway to the left,
a canted bay window at the south end, 3 windows between these,
and a parapet with a panel in the centre lettered "OFFICES".
The north-west turret has 2 windows on each floor, those in the side staggered. The south-east turret has blind windows. The engine house, 3 storeys, 7 x 3 bays, has square windows, tall round-headed windows with keystones and radiating glazing bars, and keyed oculi, on successive levels. Base of west tower has foundation stone laid by Mayoress Mrs Margerison, May 1905. INTERIOR: former engine house has substant:ial remains of cream and green patterned glazed tiling.