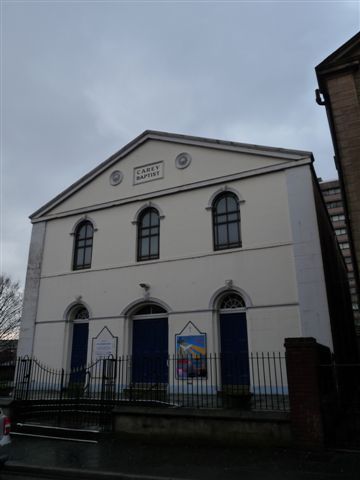 Chapel for Methodists of Countess of Huntingdon's Connexion,
now Baptist church. 1826, altered. Brick, with scored stucco
facade, slate roof. Rectangular plan with short lean-to
extension at west end. Gable to road. Two storeys, a
symmetrical 3-window facade, with corner pilasters, impost
band to ground floor, sill-band to 1st floor, and gable
treated as a pediment. The ground floor has 3 doorways, the
centre segmental headed with panelled double-doors under a
2-light fanlight, the outer round-headed with panelled doors
under fanlights with radiating glazing bars, and all with
moulded surrounds to the heads including keystones; the 1st
floor has round-headed windows, all with coloured margin panes
and moulded surrounds to the heads with imposts and keystones;
the pediment has a central tablet lettered "CAREY BAPTIST"
flanked by circular vents. The side walls have tall
segmental-headed windows with coloured margin panes (formerly
4 in each side but the 4th on the south side now covered by
C20 addition).
INTERIOR: former horseshoe gallery now reduced to curved
gallery at east end, with panelled front and carried on
slender cast-iron columns; dentilled cornice and panelled
ceiling; moulded surrounds to windows; Corinthian pilastered
architrave to opening at west end, with modillioned cornice
and frieze lettered "ONE LORD ONE FAITH ONE BAPTISM".