The Lodge, Torre Abbey, and Attached Garden Walls and Railings 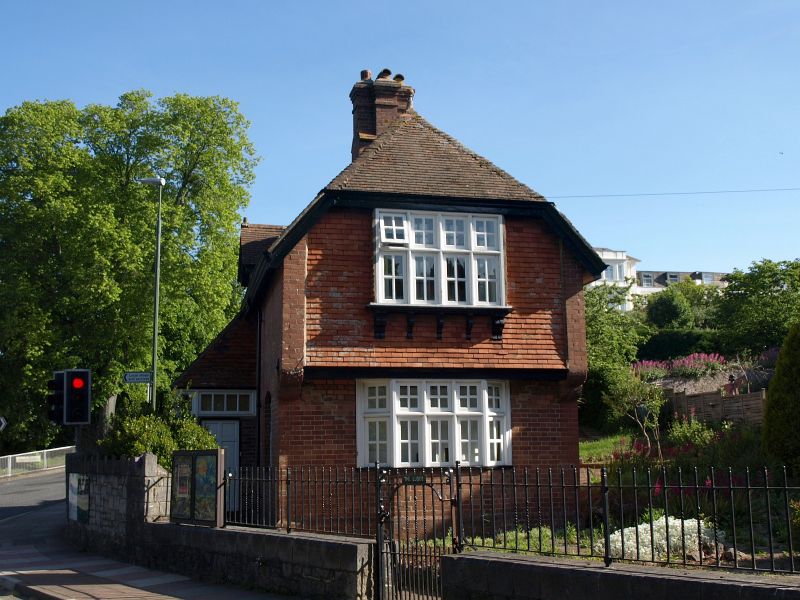 Small detached house. c1900. Flemish bond brick with some tile
hanging; tiled roof, half-hipped at ends; axial brick stack
with clustered shaft with corbelled cornices. South-eastern
Vernacular Revival style.
PLAN: Approximately rectangular with entrances on the west and
north side.
EXTERIOR: 2 storeys, roof swept down as catslide over north
end; porch in outshut with catslide on west side. One window
to west side; glazed porch to left with door on right return.
Segmental-headed ground-floor window to right with small panes
and thick glazing bars. Right return facing Abbey gates has a
shallow canted bay to the ground floor, similarly glazed.
First floor is tile hung and jettied out between brick cheeks
with moulded stone corbels; 4-light first-floor end window
(similar glazing) on moulded timber corbels. North end has
half-hipped dormer in the outshut. Grey local limestone rubble
walls enclose the garden, towards the Abbey gateway these
change to low walls with ashlar coping and c1900 railings with
a cast-iron garden gate.
INTERIOR: Not inspected but may retain features of interest.
HISTORY: One of a group of buildings near the entrance to
Torre Abbey, The King's Drive (qv), and built as part of the
estate of the Cary family, long-time owners of the Abbey.
Formerly the gate-keeper's house.