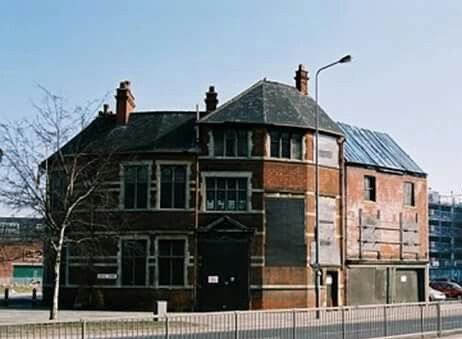 PLAN: Castle Buildings is located at the junction of Waterhouse Lane and Castle Street with a curved western corner frontage. Internally the building has an entrance hall with rooms off to the north east and north west, and a stair hall off to the south corner. The adjoining building known as 13 and 14 Castle Street, which is attached to the southern corner of Castle Buildings, is not of special interest and is excluded from the listing.

EXTERIOR: whilst largely obscured by scaffolding at the time of writing, the building, which has pitched and hipped slate roofs with substantial ridge stacks, is mainly of two storeys with a three-bay, three-storey section at the southern corner.

The building's principal elevations consist of five two-storey bays along Waterhouse Lane and six bays curving around the corner frontage, the last three of which rise to three storeys. The windows are largely mullioned and transomed and have plain and leaded glazing (some of which is damaged) and ashlar surrounds incorporating random quoining, with further ashlar dressings including sill bands, floating cornices to some of the windows, paired bands at the mid-height of the windows, and lintel bands to the ground-floor windows and stair windows on the southern side.

The main entrance in the left-hand bay of the three-storey section consists of a tall and elaborate Classical ashlar doorcase with an enriched frieze and pediment framing an arched doorway with richly carved spandrels and recessed eight-panel double doors (one of which has been removed and is being stored in the entrance hall). A plainer secondary entrance is in the right-hand bay. Above the main entrance is a large rectangular window, whilst to the right are two tall stair windows; that to the left has curved glazing bars in the lower part. On the second floor are mullioned windows to each bay.

The two-storey bays have cross windows and larger mullioned and transomed windows to each floor; those to the upper floor have upper lights with rounded heads.

The rear elevations, which face into a small yard area, have windows with segmental-arched red-brick heads. A single-storey lean-to and tall chimneystack in the rear yard area still depicted on modern OS maps have been demolished, leaving the isolated remains of a toilet block, which is not of special interest and is excluded from the listing.

Attached to the southern corner of the building is 13 and 14 Castle Street, which is heavily altered and damaged by fire, and is excluded from the listing.

INTERIOR: internally plain moulded cornicing survives along with a parquet floor to the ground-floor main office and a patterned tessarae floor in the entrance hall. Most of the floorboard floors have been removed and ply sheeting laid down over joists. Fireplaces have been removed from all floor levels, but chimneybreasts survive, along with cast-iron radiators, some built-in cupboards, some dado panelling, four-panel and six-panel doors, and moulded door and window architraves.

The main entrance leads into an entrance hall that has lost its panelled dado/ wainscotting. A tall arched opening off to the right with a later inserted glazed screen incorporating frosted glass depicting ships and sail boats leads into the stair hall, whilst a doorway off to the left of the entrance hall with a six-panel door with faded signage lettering reading 'GENERAL OFFICE' and 'ENQUIRIES' leads into a large former office.

The ground floor is occupied by a series of inter-linked offices, with those at the western corner being more formal spaces. Occupying most of the Waterhouse Lane block is a large main office (probably the general clerk’s office originally), which is an open-plan space with cast-iron columns and three offices set along the north-west side with partly-glazed panelled screens and partitions. A waiting area/enquiries kiosk with panelled walls and a serving hatch occupies the south corner of the main office and provides direct access into the entrance hall. A former office at the south-western end of the main office has been enlarged and converted into a vault.

The main stair hall is located to the south corner of the building off the entrance hall and has a doorway underneath the stair that leads to the secondary entrance and the rear yard. The hall contains a sweeping partly-cantilevered stair that provides access up to the first floor and has panelled newel posts with ball finials. The stair's closed string and balustrade have been removed to the lowest flight and the balustrade is boxed-in to the upper flights. A later doorway opening has been inserted off the main stair to connect via a short flight of steps into the first floor of the neighbouring 14 Castle Street. A narrow attic-like stair on the first-floor landing with newel posts in the same style as those to the main stair provides access up to two second-floor rooms above the stair hall.

The first floor consists of a series of offices, one of which to the south-west corner may have been a boardroom and retains some wall panelling. Above the main office is another similarly sized space, but without the separate partitioned offices alongside the north-west wall. The two second-floor rooms contain fixed shelving units.

Castle Buildings was constructed in 1900 to the designs of the notable Hull architect B S Jacobs for Messrs G R Sanderson, steamship owners and brokers. The building was occupied by a number of maritime-related tenants in addition to Messrs Sanderson, and this link continued throughout its history, with occupiers including the Ohlson Steamship Co Ltd. The building remained in active use until the 1970s.

Castle Street (originally known as Mytongate) formed one of the principal routes out of the old town, and is believed to have been re-named in the early C19 after George Castle, a builder in Hull. The street was widened in the 1970s and is now a dual carriageway. All the early buildings along the street west of Prince's Dock Street, except for Castle Buildings, the Earl de Grey Public House, and a warehouse at the south-east corner of Prince's Dock, have been demolished and replaced by modern development and car parking.

Castle Buildings, constructed in 1900 to the designs of B S Jacobs, is listed at Grade II for the following principal reasons:

* its striking curved frontage and Renaissance Revival styling maximise its prominent corner location on one of the oldest routes out of Hull;
* Interior survival: numerous historic features survive within the interior and the building's original function as a shipping office remains clearly legible, with a clear differentiation between more formal meeting spaces and offices and the more informal general clerks office;

* located close to the docks it is an important physical reminder of Hull's maritime history and trading links, and has been occupied by a succession of maritime-related tenants throughout its history.