Cathedral Church of the Holy and Undivided Trinity 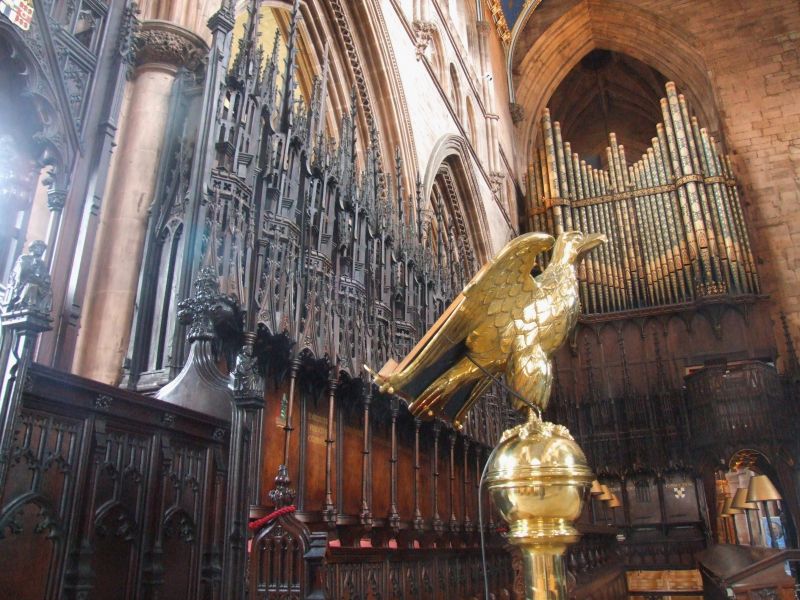 Entry Name: Cathedral Church of the Holy and Undivided Trinity

Cathedral Church of the Holy and Undivided Trinity

INTERIOR: 7-bay choir is internally C13 but completed in the
late C14, the east window is probably c1380. Nave has
triforium and clerestory in Norman style with some internal
distortion due to subsidence; the west wall is c.1652 with
1870 windows; some of the other windows in the nave are later
insertions; north door (now internal) was added in 1813-4 and
gives access to the 1956 vestry. Blocked south doorway to
cloisters appears to have been C12. South transept of similar
Norman details, the south door is 1856 (here originally the
dormitory range joined the Cathedral and roof line can be seen
externally); chapel has panelled and traceried wooden screens
of late C15. North transept has 1858 inserted north window to
memory of Dean Tait's children replacing earlier windows of
1764 and c1380; former external window now internal, lit the
crossing when the transept had a flat roof (similar windows
over nave and south transept were removed in 1855-7
restoration). Choir has C13 arches on clustered columns with
elaborately carved capitals representing the 12 seasons. C15
choir stalls with later C15 mural painting on the backs.
Barrel-vaulted ceiling is painted with stars on a blue ground
and coats-of-arms of local gentry (originally to the design of
Owen Jones in 1856 and replacing a similar medieval ceiling
covered by a false ceiling in 1764). East window contains
medieval glass in tracery head, the lower glass having been
removed in 1764, was replaced with the present plain glass in
1862. For fuller details of the interior see Pevsner (1967)
and the Pitkin guide to the Cathedral.