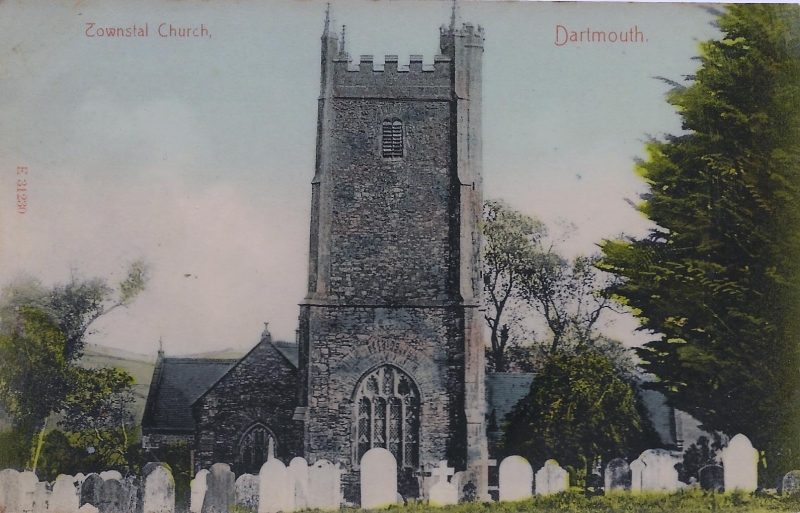 Parish church. Norman font, basically early C14 with C15 or
early C16 tower, restored 1881-5 by Ashford. Local stone
rubble with red sandstone, different cream-coloured
freestones, and granite dressings; slate roof with pierced
crested ridge tiles.
PLAN: Nave with north aisle, lower chancel, transepts and west
tower. Small C19 vestry to north of the chancel.
EXTERIOR: Tall west tower making decorative use of
different-coloured stone dressings: 2 stages with diagonal
buttresses rising above the embattled parapet to crocketed
finials and, on south side, semi-octagonal stair turret;
single and double lancets to the belfry; west doorway a red
sandstone 2-centred arch containing a C19 studded plank door
with massive wrought-iron strap hinges (similar doors
elsewhere); directly above a granite 4-light window with
Perpendicular tracery and plain hoodmould; plaque high on
south side commemorating the church wardens of 1700. South
side of the nave contains an inserted C19 three-light window
with intersecting Y-tracery with hoodmould and uncarved block
label stops. C19 south porch to right: gabled with 2-centred
outer arch, double chamfered, and door contains an ornamental
cast-iron grille; gable, like all the others, with coping and
apex cross. Other windows are C19 replacements, Decorated
tracery in the transept windows, and Early English tracery to
the 2 windows on the south side of the chancel (with leafy
capitals and nailhead ornament), east end has a 3-light window
with ogival Perpendicular tracery in the blocking of a much
larger window (some of the moulded jambs are exposed inside),
and triple lancet in east side of the north transept. C19
gabled vestry in Early English style. 3-bay north side of
aisle divided by buttresses; windows with Perpendicular
tracery and central doorway, a late C15 or C16 granite Tudor
arch with carved spandrels. C19 cast-iron rainwater goods
around the church.
INTERIOR: The nave, aisle and transepts have C19 open wagon
roofs with carved bosses. Ceiled wagon roof in the chancel
with smaller carved bosses is probably earlier. Tall plain
tower arch with imposts and plain chancel arch. Early C14
three-bay arcade (including north transept) has octagonal
piers with concave sides, shafts in the diagonals, and moulded
capitals, shallow chamfers to the arches; similar to south
transept. North side of chancel has large segmental arch to
the organ, 2-centred arch doorway to the vestry and,
alongside, a most unusual eye-shaped squint framed with
zig-zag ornament. Piscinas in sanctuary (with cusped ogee head
and shelf) and transepts. Various rere arches to the windows
with nailhead ornament to the C19 windows on the south side of
the chancel and a broad roll moulding to the nave window.
Plastered walls and stone flag floor including a couple of
ledger stones and C19 cast-iron grilles.
FITTINGS: Unusual restored C17 oak altar table, top supported
on carved heraldic beasts. C19 timber communion rail in Gothic
style. Oak Gothic pulpit dated 1874 and lectern in same style.
Most of stalls and benches are plain C19 deal, but chancel
includes two C19 good oak prayer desks carved with blind
Perpendicular tracery. Norman font on new circular stem,
octagonal bowl with shallow blind arcade. Large timber boards
in the chancel recording charitable bequests from 1548-1885.
South transept screen, 1983 by SG Scardifield.
MEMORIALS: Several good monuments. Oldest is medieval under a
low arch in south transept - very worn Purbeck marble
recumbent figure in long robes. In chancel, good large marble
monument in memory of Thomas Boone (died 1679) and his wife
Dorothy (died 1657) - plaque with frame carved with buds and
flowers rising to an heraldic cartouche in front of a double
pediment (segmental in front of swans neck) on Corinthian
columns, whole surmounted by urns and bottom shelf on fluted
consoles with festoons and another cartouche between. Nearby a
couple of smaller C19 marble monuments with urns, in memory of
William Barber who died at sea in 1817, and members of the
Banfill family who died between 1790-1825; both are signed by
Edward Wimser of Newton Abbott. Oval marble plaques on south
wall of the chancel, in memory of 6-month old Sophia Brown
(died 1777) and Richard and Dorothy Pillar who died with their
daughter Elizabeth in 1814. Other good monuments in the south
transept. An architectural plaque in memory of William Roope
(died 1666) has Doric columns on a shelf with drapery between
the consoles below and moulded cornice above surmounted by an
heraldic achievement with remains of ancient colour. Good
marble monument in memory of 12-year old Miss Mary Roope "a
young lady of promising expectations" surmounted by a portrait
medallion with putti holding open drapery to reveal it - an
excellent unsigned work. Others in memory of Charles Hayne
(died 1842) with mourning mother and child by Denman of
London, Jane Jodrell (died 1821) with sunburst, and Allin
(sic.) Gibbs (died 1838). Good brass with figure in civilian
dress and rhyming epitaph in memory of Robert Holland (died
1611).
GLASS: C19 glass in east window and the rest is C20.
(The Buildings of England: Pevsner N: Devon: London: P.322).