A Grade II* Listed Building in Yarmouth, Isle of Wight 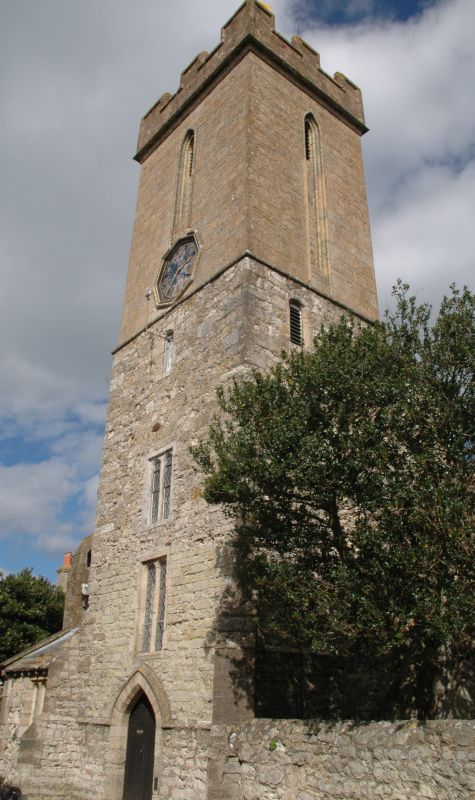 Parish church. On site of a medieval church destroyed during
French raids in 1377 and 1543. Stone pillars to nave arcade
date from 1540s rebuilding but otherwise the church was
rebuilt between 1614 and 1626 with Holmes chapel added in 1692
to contain the monument to Sir Robert Holmes Governor of the
Isle of Wight 1667-92. Top stage of the tower added by Daniel
Alexander of Maidstone in 1831 and also west gallery and pews.
Built of stone rubble with slate roof, the lower 3 courses of
stone slates. Nave of 4 bays with aisles, lower chancel with
south chapel and west tower. West tower, the lower 4 stages of
1614, the upper or bell stage added by Daniel Alexander in
1831 in memory of his sons Henry and William and to form a
seamark. Lower stages of coursed stone rubble. West face has
angled buttresses. Top stage of original portion has cambered
lancet window, the lower stages have paired lancets, one with
the date 1614 and stilted arched doorcase with drip-mould.
Other sides have cambered lancets. Top stage is of coursed
stone rubble with crenelleted parapet and tall thin lancet of
moulded yellow brick. Square stair turret. North aisle has 3
double lancet windows and gabled stone porch with brick
kneelers and round-headed arch. Angled buttresses to corners.
South aisle has gable end with kneelers. 3 double cambered
lancets and C19 semi-dormer with kneelers and arched window
with quatrefoil above and 2 trefoliated lights below west end
has cambered arched window. Angled buttresses to corner.
Chancel has C17 fabric but C19 windows. Holmes Chapel is of
red brick with stone quoins, kneelers, plinth and elaborate
stone window surround with triple curved heads and scrolled
keystone. Interior: Nave of 4 bays has arcades of octagonal
tooled stone piers with stilted brick arches. Canted nave roof
in 5 cants with 5 tie beams. Aisle roofs have through purlins
and principal rafters supported on stone corbels. Early C19
west organ gallery and box pews. 1873 marble and stone pulpit
with nearby 1625 iron bracket with C19 hourglass. Coat of Arms
of George I over south doorway and 3 hatchments to Holmes and
Rushworks families. South aisle has memorial tablet to the
architect Daniel Alexander, his wife and 2 of his sons. Aisles
have a series of C18 or early C19 wall tablets. Chancel has
round-headed chancel arch with 3 light cambered casement
lighting the Nave. C19 scissor-braced roof. East window has 6
cambered lights and 2 cambered lights to side walls. South
wall has monument to Captain John Urry by Nollekins erected in
1802, a wall tablet with sarcophagus with urn above and
obelisk with shield. North wall has memorial to Edward
Rushnorth (d.1817) who built Farringford in Freshwater C.P.
Holmes Chapel has 1692 entrance with elaborate swans neck
pediment containing a scroll with the name Sir Thomas Holmes,
pilasters and a bolection moulded architrave. The principal
monument in the chapel is to Sir Robert Holmes, Governor of
the Isle of Wight 1667-1692 which consists of a marble statue
of the governor resting against a cannon with a parchment in
his right hand in a pink marble surround with curved open
pediment with shield, cap of state, Ionic columns and
elaborate console brackets. The statue is said to have been
sculpted for and representing Louis XIV of France, but the
vessall and sculptor were captured by an English ship
commanded by Sir Robert Holmes who compelled the sculptor to
carve his own head on the King of France's body. The
relatively plain dress of the statue renders this theory
suspect. The chapel also contains a marble tablet to Henry Son
of Thomas Lord Holmes d.1751 in his 5th year.
(N. Pevsner: B.O.E. Hampshire and the Isle of Wight: 776).