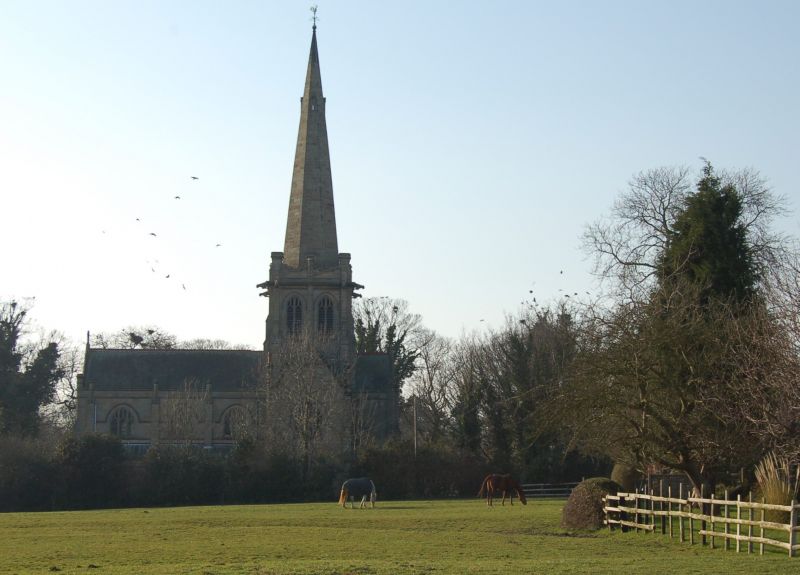 COLSTON BASSETT CHURCH GATE
SK63SE (east side)
4/3 Church of St John
the Divine
1.12.65
GV II
Church. 1892 by A W Brewill for Robert Millington Knowles of Colston
Bassett Hall. Ashlar. Blue slate roof. Cruciform plan with tower
and spire over the crossing. 3-bay nave with clerestory, low lean-to
aisles and south porch, single-bay chancel and single-bay north and
south transepts. Perpendicular style. 3-light square-headed aisle
windows, other windows 3-light except the 4-light east window all with
Perpendicular tracery. Dated cast-iron rainwater heads. The square
tower has diagonal buttresses and each face has two 2-light, louvred,
bell-chamber openings. Crenellated parapet with corner and intermediate
piers. Tall, slender octagonal spire with lucarnes near the top.
Interior: 3-bay north and south arcades on short round piers with
heavily foliated capitals. In the spandrels, finely carved winged
angels with musical instruments support engaged colonnettes which support
the arch-bracing to the two traceried and brattished principal roof
trusses. Oak-panelled box pew at west end with elaborate canopy.
A tablet by the south door commemorates the erection of the church by
the squire, Robert Millington Knowles, in memory of his eldest son John
Haslam Knowles, died August 15th 1890 aged 21 years, and his wife, Alice
Catherine Knowles, died March 1892 aged 39 years. In the south chapel
is a marble monument erected by Lord and Lady Crawshaw in memory of their
daughter, Alice Catherine Knowles, died March 1892, a well carved life
size figure of an angel pointing to a cross on a simple background.
Also in the chapel, an early octagonal font with plain shields and a
brattished rim, possibly from the old church of St Mary (q.v.).
The building is notable for its high standard of ashlar work. An
important village site.
N Pevsner. The Buildings of England, 1979.