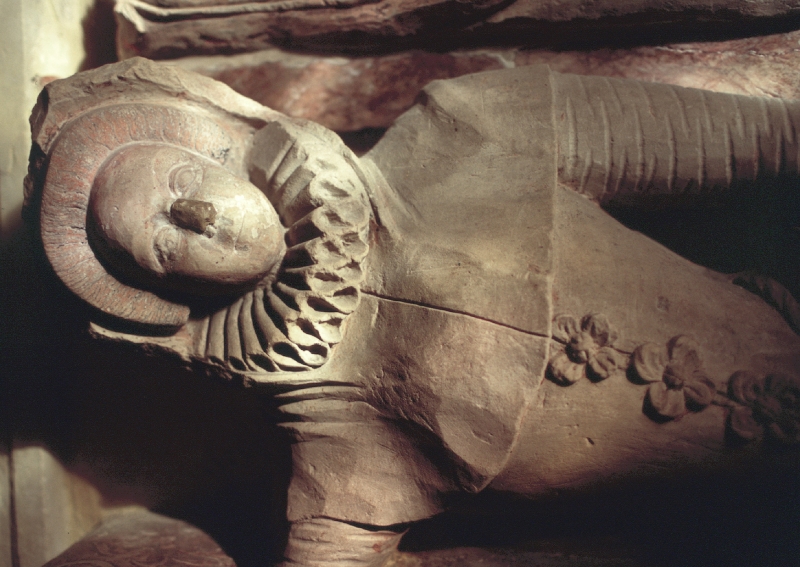 Exterior: A humble church, set low in its steeply sloped churchyard. The stocky west tower has a saddleback roof and upper stage added in 1887-8, reinstating the medieval upper stage which was ruinous by the 17th century. It is unbuttressed. The west window has interlaced tracery; the belfry lights more elaborate Victorian tracery. The simple south porch has a sundial in its gable with the date 1703 and the pun "we die all". The inner south door is Norman, with chamfered jambs and a segmental head which has a simple rope mouding. Next to it a four-light square-headed window, perhaps c.1500-40. The Dec south transept is disproportionately large. Its south window is of three lights, with cusped interlaced tracery, c. 1300-50. The chancel is gabled, with a Dec east window. In the south wall are two small Perp windows (ogee-headed lights in square frames). The north aisle was added in the 15th century. It has three small windows with four-centred heads, and a blocked door at the west end of the north wall.

Interior: Perp North arcade of four arches, on piers of four shafts and four hollows, with octagonal capitals. The central pier and its flanking arches had collapsed and were replaced in 1887. Wagon roofs of 1887, with re-used medieval bosses in the chancel. The opening to the south transept has big timber braces supporting the wall plate for the nave roof, which continues uninterrupted across the opening (a device of 1887). Floors partly stone flagged, partly encaustic tiled.

Principal Fixtures: Norman font circular bowl with a herringbone pattern on the chamfered upper rim, large and small chip-carved rosettes, then chevrons around the base of the bowl. Circular stem encircled by a plain roll moulding and a cable moulding. On the north side of the tower arch is a stoup (ex-situ), also with pretty Norman chip carving. Oak panelled reredos of 1908, the upper arches copied from a Jacobean pulpit formerly in the church. Oak pulpit with reliefs from the life of St Peter, perhaps Edwardian. An ex-situ Dec piscina is now in the nave south wall, ogee pointed with cusping. In the east wall of the south transept is another of similar design hidden by the organ, suggesting that the south transept was originally a semi-private chapel with its own altar. The organ was moved from the north aisle to the south transept in 1952. The plain nave benches are of pine, 1887-8. East window of 1887. North aisle central window, 1967, by J. Wippell and Co., Exeter.

Monuments: North of the altar, an ambitious and showy standing monument to Otwell Hill, d. 1617: this comprises a stiffly reclining husband, his wife in similar pose on a lower shelf, both with elbows resting on red marble cushions; freestanding Corinthian columns support a high arched canopy with strapwork and inscription in the tympanum; the surround is everywhere ornamented with ribbons, rosettes, etc. In the north aisle, a humbler slate tablet to Lewis Dart d. 1632, showing his widow and nine children kneeling beneath two arches. On the exterior of the porch, another slate tablet to George Carew, d. 1661, with crude classical patterns incised.

History: A church is documented by 1230, and (given the Norman south door and font) probably existed significantly earlier. It was rededicated in 1259, the south transept added probably in the early 14th century, and the north aisle in the 15th century. By the 17th century the upper tower was in a state of collapse. J.P. St Aubyn's restoration (1887-8) rebuilt and heightened virtually all the walls, renewed the roofs and the upper stage of the tower, rebuilt the porch, blocked the north door, and completely renewed the north aisle west window and the north aisle second from east. Tracery in other windows was repaired. An organ was sited at the east end of the north aisle, and the south transept was given over to seating. James Piers St Aubyn (1815-95) developed a very successful practice, with several hundred new or restored churches to his credit. He had offices in London and Devonport. Mevagissey is a late work and perhaps done as a personal favour, since St Aubyn formally retired in 1885; he is buried at St Michael's Mount, Cornwall.

Reasons for Designation: The church of St Peter, Mevagissey, is designated at Grade II* for the following principal reasons:

* A good medieval village church of the humbler sort, nestled low in its sloping churchyard and retaining a nicely decorative Norman doorcase, chip-carved font and stoup

* Largely Victorian fittings, from a restoration by J.P. St Aubyn, are complemented by the splendid early 17th century monument to Otwell Hill.