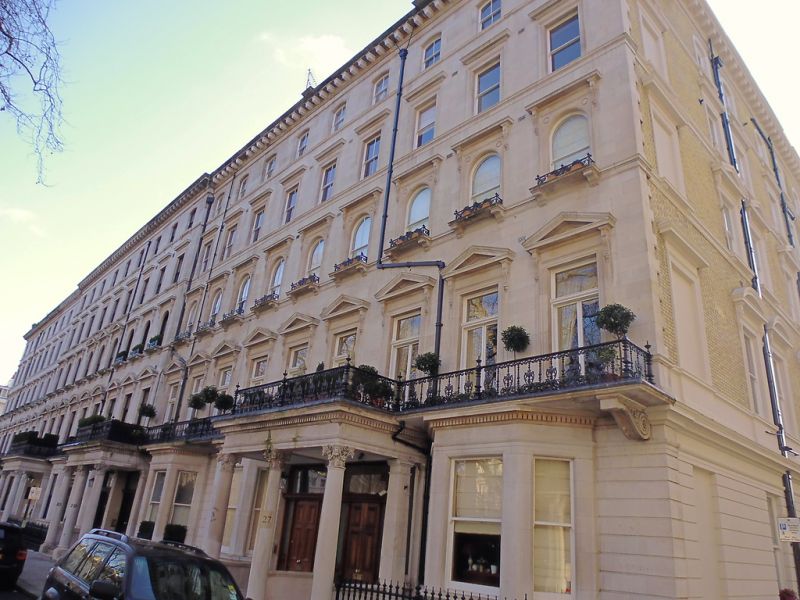 Terrace of nine townhouses, constructed 1868-1872 by the builder-speculators Peter and Alexander Thorn (with possible design influence from John Elger) as part of an Italianate square development.

PLAN: the terrace consists of nine equally-sized townhouse mansions, with paired frontal porch entrances to Ennismore Gardens. Extensions of varying sizes and height project to the rear. All of the houses within the terrace have been subdivided into flats. Associated alterations have been made to original plan-forms to facilitate these subdivisions.

EXTERIOR: the south terrace is of five main storeys above ground, not including the later added mansards. Each house has three evenly spaced window bays to the principal elevation. The central trio within the terrace step forward slightly, emphasising its symmetrical composition. The principal elevation to Ennismore Gardens is of Italianate palazzo design. Channelled masonry, canted bay windows and Corinthian porches grouped in pairs feature on the ground floor. Each of the porches consists of a trio of columns, although the porch serving Nos 31-32 has had its central column removed as part of the unification of the two houses. At first-floor level, tall pedimented French windows open to balconies with fine cast-iron railings. Above, at second floor, there are arch-headed windows with bracketed ledges and further cast-iron railings; at third floor the windows are square headed with a simple entablature and at fourth floor unadorned segmental headed windows sit beneath a heavy modillion cornice. With the exception of the first-floor French windows, plate glass sashes feature throughout. Decorative cast-iron railings with ornate sectional finials and gates front onto Ennismore Gardens, these set between the projecting porches.

Each of the houses have had mansards added, which step back and are partially obscured behind the parapet. The side elevations to the west and east are in London stock brick with pedimented window surrounds to the first and second floors, with square-headed and corniced surrounds and simple segmental surrounds to the third and fourth floors respectively. There are three chimney stacks of stock brick with stone capping to the end bays (infilled with mansard extensions on the east side). Blind windows occupy the northernmost bay of both terrace ends.

The rear elevation of the terrace, which is largely obscured by Ennismore Garden Mews, is in London stock brick and has a range of later extensions of varying sizes and dates; several with fire escape stairs.

INTERIOR: only partially inspected. All nine of the former townhouses within the terrace have been subdivided (several extensively), with related alterations to internal plan-forms and fabric made to facilitate this. The full extent of the survival of original fittings and plan-forms in individual properties is not known. Where original fittings, decorative schemes or plan-forms survive, these will contribute to the special interest.

The Greenwood Map of 1830 shows Knightsbridge as a hamlet on the fringe of the burgeoning metropolis; a pattern of settlement which would become unrecognisable by the end of the century. At this stage, the southern boundary of Hyde Park was lined by a string of mansion houses with extensive grounds, developed at various stages from the late C17 onwards. Over the course of the C19, the westward expansion of London saw piecemeal speculative developments fragment the old Knightsbridge estates and new urban terraces and squares replace the grand mansions.
Ennismore Gardens was typical of this mid-C19 pattern of development in Knightsbridge. The land the new square occupied had been part of the Kingston Estate. This was one of the largest holdings in Knightsbridge, extending over twenty-one acres, originally with uninterrupted views towards Surrey. Kingston House itself built in the mid-C18 survived until the 1930s, when it was eventually cleared for redevelopment. The Victorian terraces congregated around Ennismore Gardens were developed in two distinct phases on land to the south of Kingston House. The first phase, comprising the terrace on the eastern side of the square (consisting of Nos 39-65; originally Princes Terrace), along with two ranges of large houses in Princes Gate, was constructed during the 1840s. This was the work of the major Victorian speculator John Elger, possibly drawing upon the designs produced by the architect H L Elmes. The southern range, comprising Nos 27-34, along with the terraces on the west and north sides of the communal gardens were built separately between 1868 and 1874.

The secondary phase, which completed the square, was laid out on part of what had become the Listowel Estate, the freehold for the plot having been secured in 1867 by the 3rd Earl of Listowel (styled Viscount Ennismore until 1856). The development was undertaken by the London builder-speculators Peter and Alexander Thorn, erected under the general supervision of W F Meakin, as surveyor to Lord Listowel. The Thorn brothers had set up in business in about 1860. Their most important commission - which nearly bankrupted them - was the new Blackfriars Bridge, built in 1864–1869 to replace Robert Mylne's bridge of 1760–1769. Following this, the firm struggled on until 1886, when stalling sales of their speculative developments caused the business to fold.

The Thorn’s terraces were conventional in their arrangement, but were conspicuously grand in their design. The use of ashlar stone for the frontage instead of more economical stock brick was unusual for a mid-Victorian speculative development. This was, as the Survey of London notes, ‘the result of circumstance as much as of architectural taste’, as the Thorns had salvaged a large quantity of Portland-stone ashlar when demolishing the old Blackfriars Bridge. The architectural historian Henry-Russell Hitchcock noted that the freestone facings, which are distinctive in an area where the use of stucco is ubiquitous, worked to achieve 'a solid dignity almost unique in London'. The Thorn’s scheme was also distinguished from the earlier east terrace by its scale and superior detailing, as exemplified by the fine cast-iron railings.

The quality of the scheme appears to have owed much to the careful oversight of John Elger. As the developer and freeholder of the adjacent Princes Terrace, Elger had reached an agreement with the 2nd Earl of Listowel that no development could begin before he was satisfied with the plans. Two early schemes were scrapped, before a third iteration of the design (possibly produced with Elger’s input) was eventually settled upon. The spacious Italianate square layout was submitted to the Metropolitan Board of Works in April 1868. Construction began on the northern range, Nos 1–9, the same year. This was followed by the southern range, Nos 27–34, which had been completed by March 1872 and were fully occupied by 1873. The construction of the western terrace, Nos 10–25, was more protracted, the houses here being built at intervals between 1871 and 1874.

Internally, the south range houses had a ‘side-passage’ arrangement. This consisted of two main reception rooms set off the entrance hall, with a smaller, private room to the rear, behind the cantilevered stone stairs. A large L-shaped drawing-room took up most of the first floor, with a corridor leading to a rear boudoir; private rooms occupied the floors above, in similar configuration albeit there is evidence of tri-partite division at some properties on the uppermost original floor (fourth). The interiors throughout the townhouses were finished to a high standard of decoration, befitting the status of the development. The service accommodation on the lower ground floor was accessed via the stone stairs in each front light well, and internally, via a simple stair below the principal set. The rear courtyard of the service accommodation originally gave access to the mews buildings, which were built to serve the principal townhouses; access being blocked when the mews houses were later separately purchased.

By the end of the C19 the demand for large townhouses, as exemplified in a particularly grand scale at Ennismore Gardens, was beginning to wane. The lateral conversion of the first of the townhouses in 1893 was the precursor of a trend which took hold following the First World War. Several of the early flat conversions around Ennismore Gardens saw pairs of houses unified, as seen at Nos 27-28, 31-32 and 34-35. Such subdivisions offered sufficient floor-space for high-status tenants who could not afford, or did not require, large townhouses. Other conversions of single townhouses, as seen at No 33 (which was sub-divided in 1947 with a lift added at this time), entailed alterations to create one flat per floor. By the 1960s most of the townhouses around the square had been converted, with later schemes implementing vertical subdivision, generally creating more than 10 separate flats within a single house. Throughout the C20, various designs of rear extensions and mansards were being added in a piecemeal manner. From the planning record for individual houses along the terrace and internal inspection of the parts of No 33, it is clear that there has been significant modernisation of the plan forms and finishes of many of the flats’ interiors in recent decades.

Into the latter half of the C20 the square was an exclusive address within Knightsbridge. One long-time resident at one of the flats who particularly exemplified the fashionable status of Ennismore Gardens was the American film star Ava Gardner (1922-1990). She lived at No 34 from 1972 until her death; as commemorated by an English Heritage Blue Plaque unveiled in 2016.

Historic interest:
* A conspicuously grand and well-preserved example of a mid-Victorian speculative development, built to form part of a high-status square on the Listowel Estate during an important period in the C19 expansion of Knightsbridge;

Group value:
* With Nos 1-9, Nos 10-25, Nos 39-59 on the north, west and east sides of the square respectively (all listed Grade II), along with the contemporary lamp standards and the gate piers to the communal garden (also Grade II).